OK, rant of the day… I HATE when people/businesses fill every square inch of usable anchoring space with mooring balls and then feel that they have the right to charge exorbitant daily fees to use them.

Is there a place for mooring balls? Of course there is. There are certain spots where the bottom is too deep or falls off too rapidly to allow for proper anchoring. Saba is apparently like that and so are certain places in St. Lucia. There are also spots that have been officially designated marine parks where the government has installed mooring balls to prevent damage to the reefs. I have no problem with either of those two situations. What I do have a problem with is restaurant owners who fill the bay adjacent to their business with balls, or other opportunists who do the same, and then sit back and collect a ridiculous amount of money for their efforts, especially if they do little to maintain the moorings. We hear that the going rate for a mooring ball in the BVIs is 30 bucks although I can’t verify that with first hand knowledge. While I have, on occasion, been agreeable to paying $10.00 to pick up a ball that I know has been well maintained, I will be damned if I will pay $30.00. It’s just not happening! 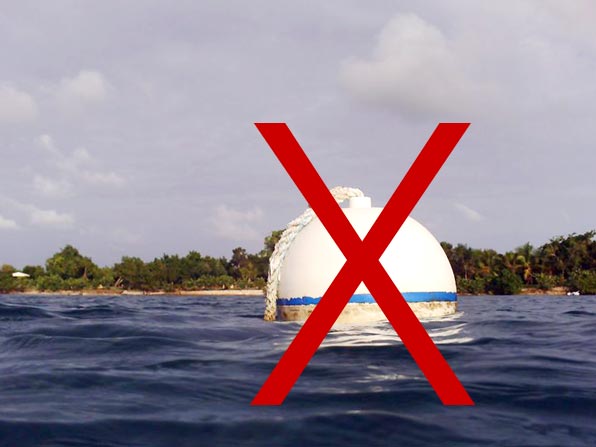 “Balls” is the word my Dad would say when he wanted to curse. Now I can understand why. 🙂

In the land of bareboat charterers, which the BVIs most certainly is, mooring balls are also a bit of a double-edged sword. Many of those people chartering boats have little experience with anchoring so picking up a ball is, no doubt, much easier for them, especially given that many of the boats being rented have, by cruiser standards at least, inadequate ground tackle. But, in always opting to tie to a fixed mooring, these same people never actually learn how to anchor properly and when forced to, because they arrive at an anchorage late in the day after all of the balls are gone, they are stuck*.

*I shared this story on our Facebook Page the other day but I’ll post it here too just so that those of you not out here cruising can get an idea of some of the silliness we witness. Last Saturday, we sat on our friends’ boat watching a poor group of sailors on a Leopard 4600 try to anchor over and over (all of the mooring balls were taken by this point in the day). After dropping their anchor right in front of us, one of their crew jumped in the water wearing a mask and snorkel to swim out and check the anchor. This was not a bad idea as the bottom in that spot is very bad. As he was swimming back to the boat after making his inspection, the remaining people on board obviously decided that they didn’t like that spot and proceeded to pull the anchor back up. Just when the swimmer made it to the back of the boat, they started motoring forward. As he swam towards the boat trying to catch it, it continued to stay just out of his reach. At this point he is visibly gassed, panics and yells HELP but no one on board the Leopard heard, with the exception of the helmsperson, they were all on the trampoline and had forgotten all about him! By now he looks as if he is in real trouble, rolls over onto his back and tries to float. Finally, one of the other passengers notices, says something to the helmsperson and then goes back to the stern to give him a hand. After first relaying this story, some people asked why we didn’t do anything as this was unfolding in front of us. To be honest, it was so unbelievable that we were stunned. Just another crazy day in the islands!

How many teeth do we need?

Transit the canal with us!