In the detailed book of mistakes that we have made, one chapter had yet to be written. I am happy to report that we have now successfully checked off its box. What mistake would that be? Read on.

Yesterday began early with us raising anchor motoring over to Sopers Hole in Tortola. Without a breath of wind, the water was glass calm. Upon arriving to our destination, we picked up an available mooring and made ready to head to the customs office. When we first checked in to the BVIs we were granted a 30-day stay, the same as everyone receives to my knowledge. If we wanted to remain here longer than that we were told that we would have to pay a $200.00 fee to temporarily import our boat. The alternative to paying this fee is to clear out, go to the USVIs for a bit and then come back, where you would receive a new 30-day cruising permit. That sounds better, doesn’t it? There was a little glitch in our plan though. When we went looking for our passports and boat documentation, we couldn’t find them. We normally keep these items in a fairly secure spot but when we checked there, the papers were nowhere to be found. Boats have countless little hidey holes making it extremely easy to secure items of importance. If you’re not careful though, it’s just as easy to forget which particular hiding spot you’ve used. Such was the case yesterday. It took us a while to find my clever little hiding spot. In the middle of this process we were visited by Dirk from Evening Ebb who just happened to be in the bay as well. It’s cool how we keep crossing paths with people that we know here. We had a brief dinghy-to-boat chat with him but after explaining our dilemma, Dirk left us to continue our search. Ultimately the documents were found and we were able to continue on to the office, clearing out without issue.

The trip to Cruz Bay in St. Johns was just as calm as the first leg of our trip. While I monitored the helm, dodging fast-moving ferries and day charter cats heavily-laden with tourists, Rebecca spent the time completing a workout on the bow. Seeing her doing so is no doubt curious or entertaining to the people on the boats that we pass by but it’s so common place for us, we hardly think about it. 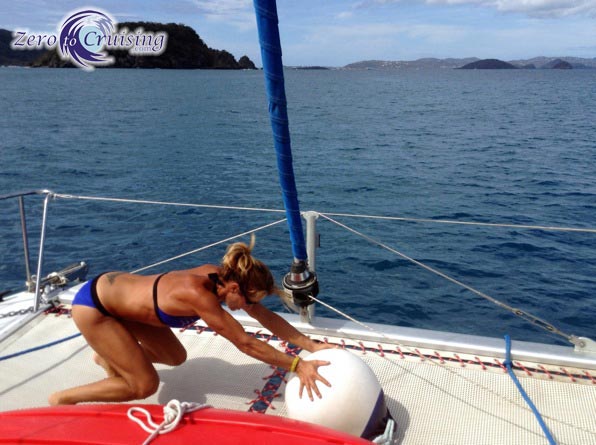 Doesn’t everyone work out while underway?

Near the end of this portion of our journey, just as we were rounding the corner to Cruz Bay, something unexpected happened… our port engine suddenly stopped and would not restart. Having never been there before, we were unsure what we were going to find in Cruz Bay so when the engine died, Rebecca was busy on the bow, both readying the anchor and getting mooring lines available. I let her know the problem but without much of an alternative, we continued on into the bay. Just as we made our way between the first two channel markers though, with boats to our starboard and rocks to our port, we lost our other engine. Now, without power, we were drifting! I quickly dropped our anchor and started paying out rode, the equivalent to applying their parking break on a car. Fortunately for us, the water was only 12 feet deep in that spot so we were able to bring our boat to a stop in short order. We were, however, embarrassingly right in the middle of the channel. We had known that we were going to have to purchase gasoline and had actually planned on taking care of that there in Cruz Bay. We didn’t plan on it being quite such a necessity though. Fortunately, we had one spare jerry can of gas on our rail and when it was added to our fuel tank, both engines roared back to life. Imagine that? 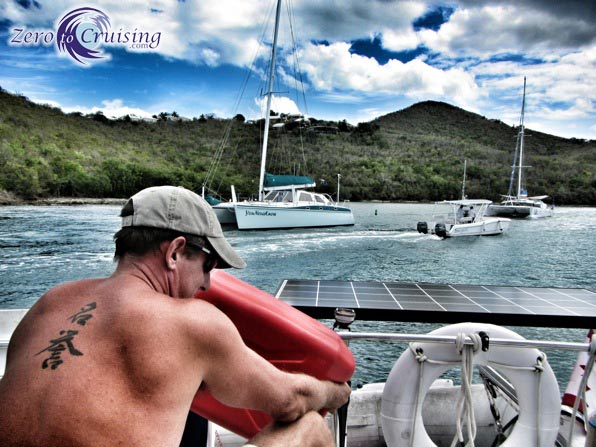 Run out of fuel? Check! In the channel? Check!

With functioning engines once again, we were able to retrieve our anchor and find a more suitable spot to secure our boat. Just as we were preparing to drop the anchor though, the captain of another catamaran that was near us yelled over to me. I couldn’t really hear him and I thought that he was yelling something about the depths or that we shouldn’t anchor in that spot. It took the better part of a minute for me to realize that it was another friend of ours, Shane, from Guiding Light. We haven’t seen Shane since we were in the Bahamas but knew that he was in the area. In fact, he was one of the friends that we hoped to meet up with during our visit to the USVIs. Here he was though, catching us unawares.

Cruz Bay is not quite as easy to deal with as Sopers Hole as all of the mooring balls there are private, forcing boats to anchor. Additionally, there is also only a very small spot for boats to anchor and then, only short term while completing the customs and immigration procedures. We had to do both that and purchase a load of gas. Shane let us in on the secret that you can sometimes be charged a fee if you take your dinghy to the actual customs dock. He told us that instead, it’s a better idea to continue on to the left side of the bay and tie up where the other dingies are and then walk the short distance to the customs office. We did as he suggested and with a friendly customs officer to help us, made ourselves all legal once again.

After paperwork and refueling were completed, we were off once again, this time to track down our friend Steve on Alternate Latitude. Steve is another guy that we haven’t seen in ages. In fact, it was in the USVIs back in 2011 that we last crossed paths. We were eager to catch up with him as both he and Shane have been chartering their boats here in the Virgin Islands and we were looking forward to hearing all of their stories. While Shane is going to be busy tending to guests for the next few days, we learned that Steve was free. He called us on the radio to let us know where he was anchored and after tracking him down in Cowpet Bay, we deposited ZTC right beside him. After a such busy day of travel, it was nice to be able to share a quiet evening of dinner, drinks and socializing with a fellow cruiser. 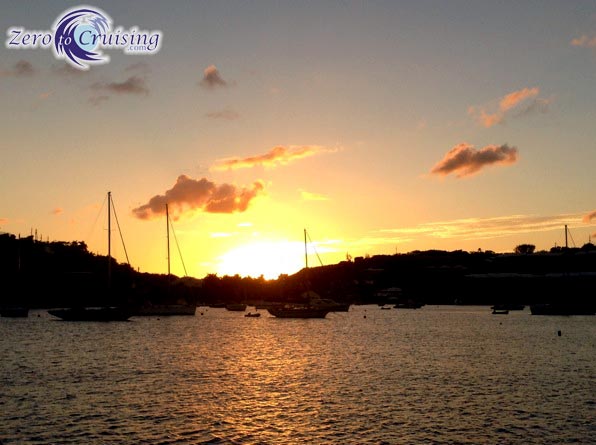 Sunsets somehow just seem better when observed on the water.

Sad to see them go!