What were we thinking?

You have a lot of time to think while on a bike tour. That can either be a good thing or a bad thing, depending upon what you choose to focus on. At least a portion of my thinking the past two days has been looking at parallels between what we’re doing now and our boat cruising days. I’ve found several. Along with that, my mind was also partially occupied by repeated flashes of, “What were you thinking?” I mean, seriously, who chooses one of the hardest off-road bike routes for their first bikepacking trek? Surely only crazy people, or dyed-in-the-wool masochists!

Into the desert we go

In order to get a jump on the heat, we left our hotel in Tecate shortly before 6:00 AM on Wednesday morning. The morning air is chilly before the sun starts burning down, so we began riding with our jackets on. It didn’t take long to heat up though with all the climbing to get out of the city. 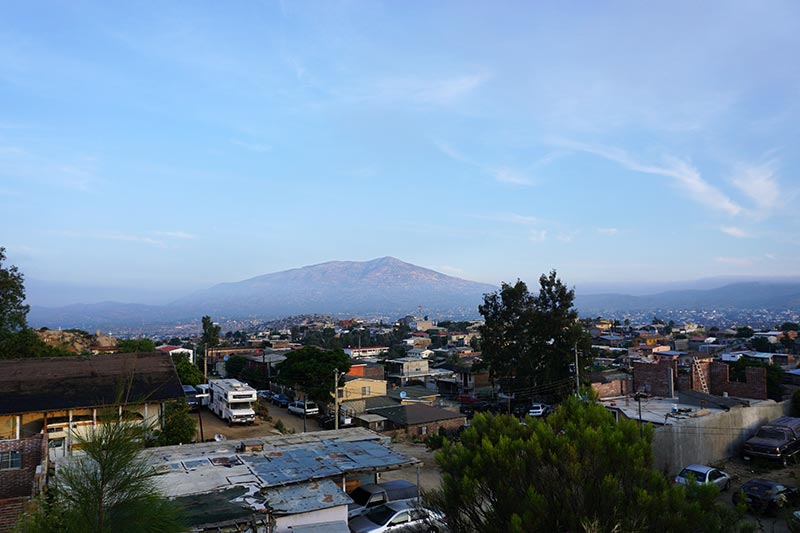 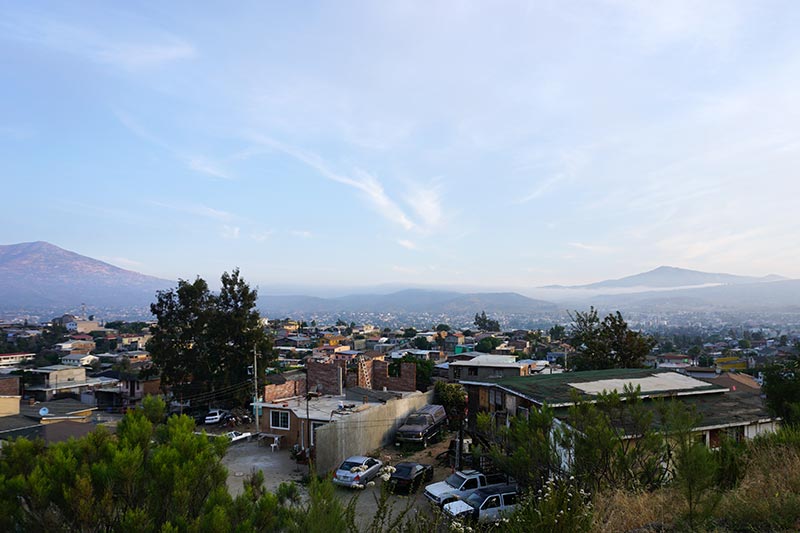 Unfortunately, there was a stretch of highway that we had to contend with before we could leave the traffic for the solitude of the dirt roads. For the record, the safety of an 8′ wide shoulder is negated when the drivers treat that shoulder as if it’s an additional lane! 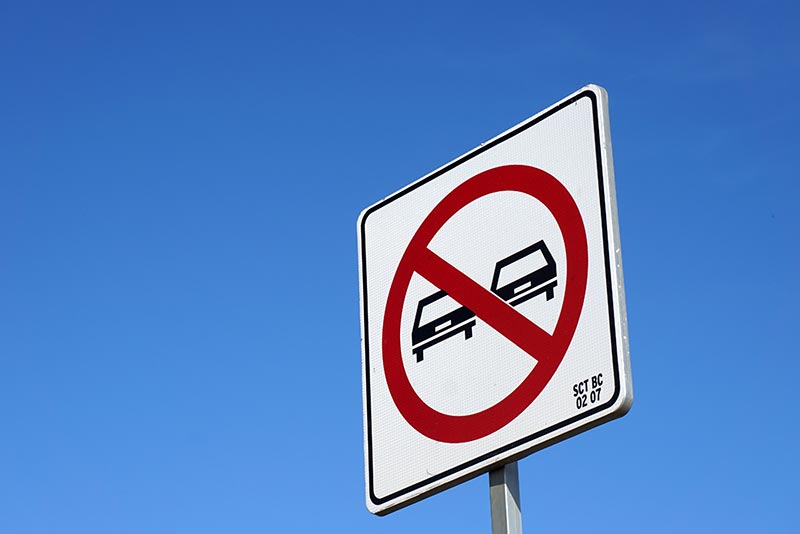 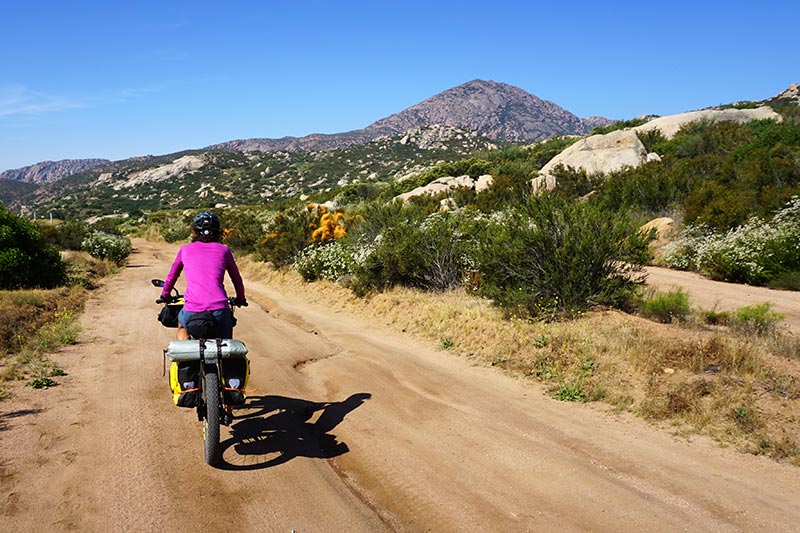 Click the above to view a much larger panoramic image. 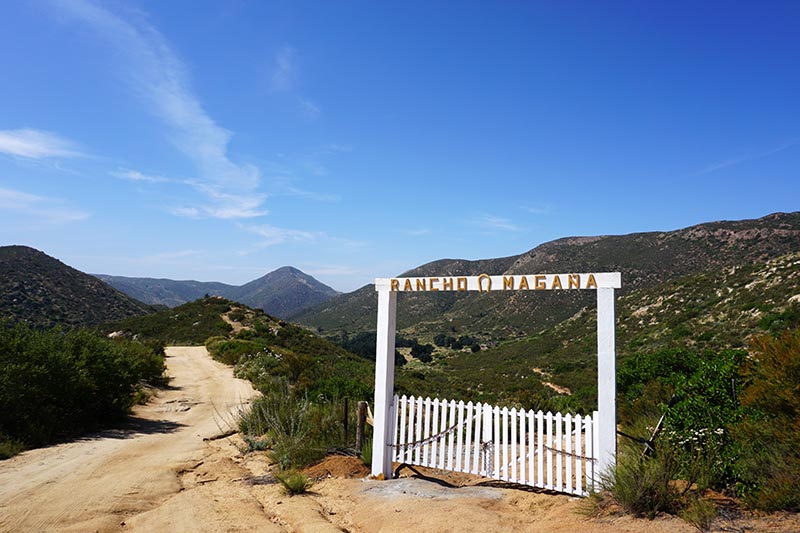 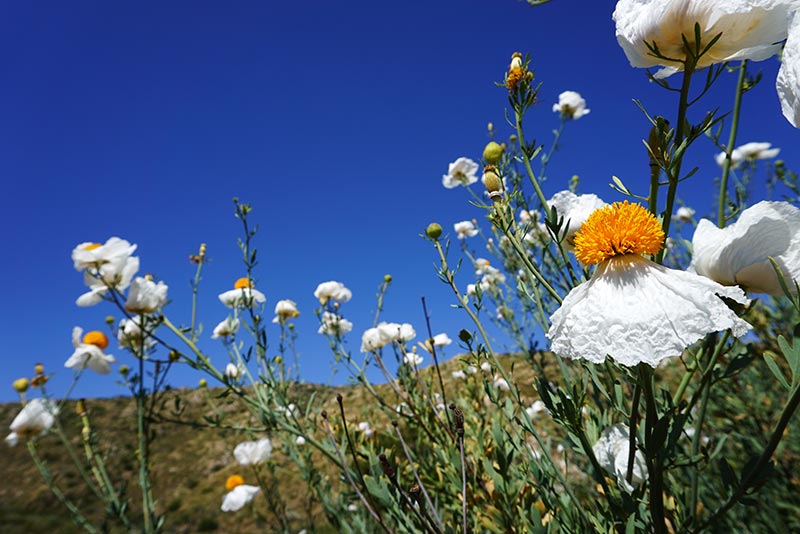 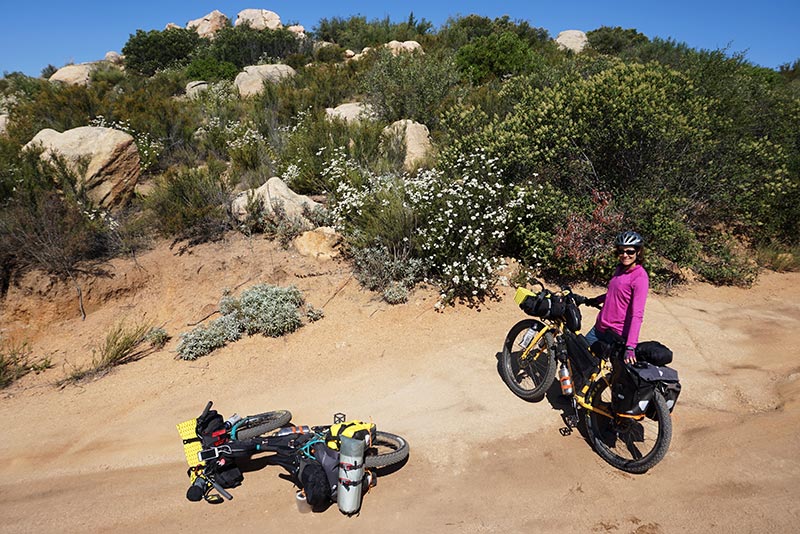 We had to deal with three separate “oh oh” situations, things that could have ended up being fairly significant problems. The first occurred at the time the above pic was taken, shortly after leaving the highway, but after a long downhill stretch. Upon stopping to take a photo of the scenery, we noticed that one of the 6L water bladders that we were carrying was leaking around the cap. We were each carrying 10L of water, and we knew that we’d need every drop. We actually purchased bladders that were reportedly robust, taking the hit in the form of a weight penalty because we know how important that water is.

As it turned out, the problem was solved by more carefully screwing on and tightening the cap (phew!). If that had failed, I was prepared to try to seal the leak with some adhesive that I had brought with me. If there’s one thing that boaters know, it’s how to fix a leak! 🙂 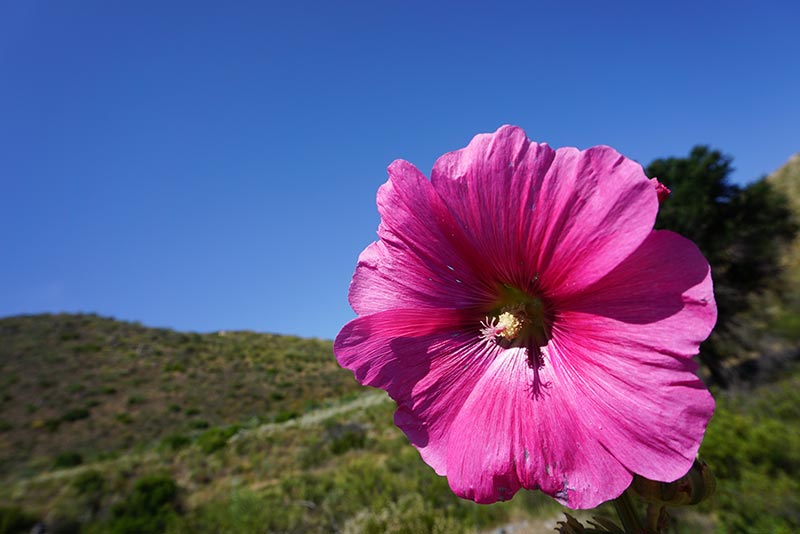 Our second challenge came in the form of our iPhones not charging well. In fact, even with the sun high in the sky and the phones set in airplane mode, our solar panel could only just keep up with the output. We played around with the settings and ultimately found the key: we needed to turn off auto brightness. Once we dimmed the screens, the iPhones charged brilliantly. In fact, we were able to keep both phones fully topped up by switching the solar panel back and forth between us, never having to resort to using the 4 charging bricks that we were carrying. 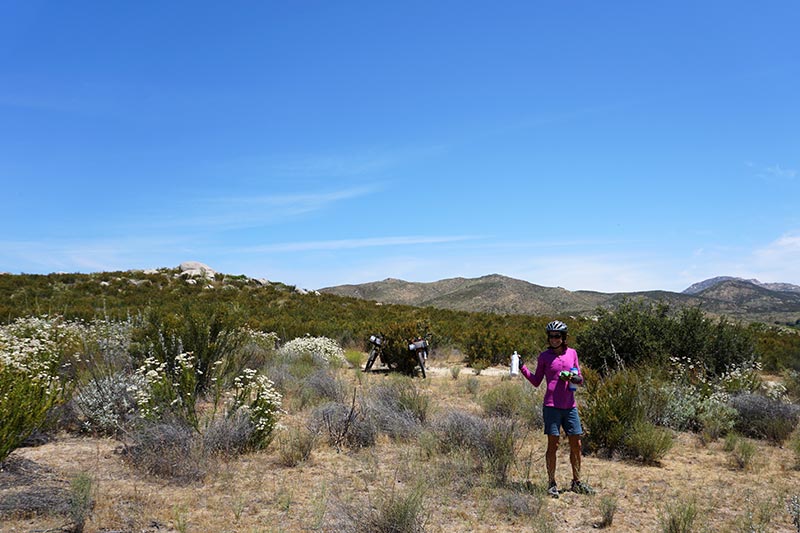 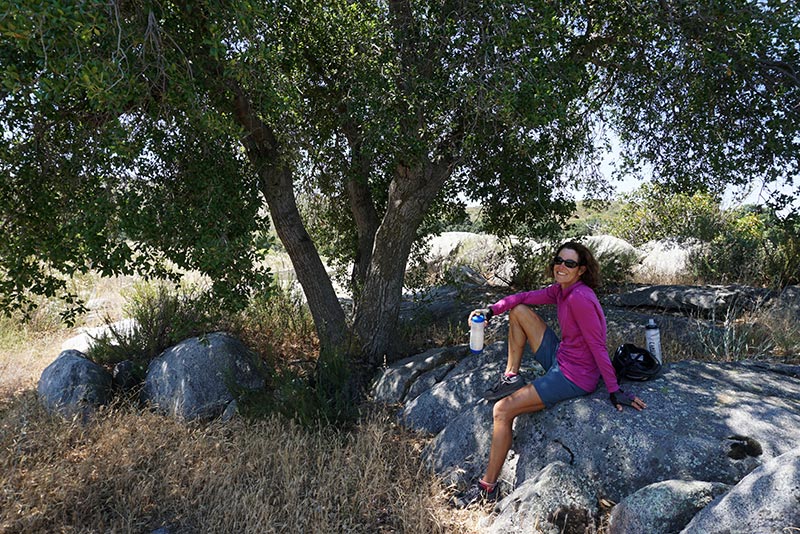 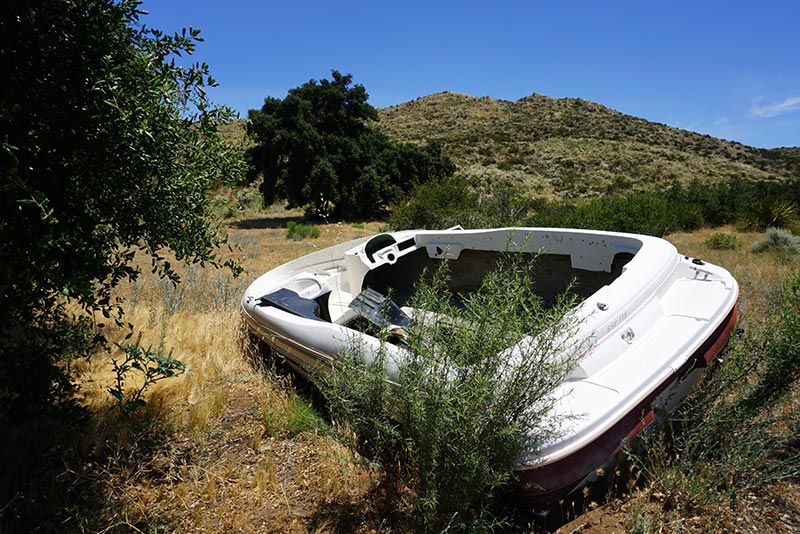 Leave it to us to find 2 boats in the middle of the desert! 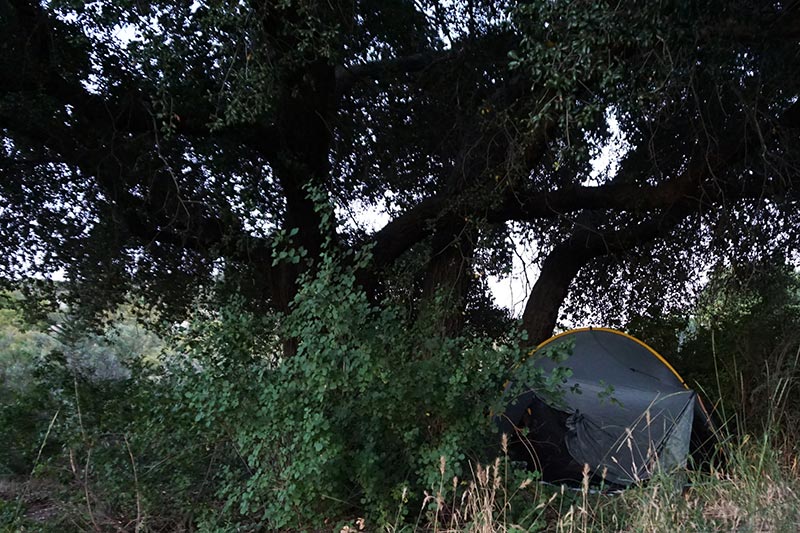 The third challenge, and it is still ongoing, is my knee. Shortly after our lunch break, I was forced to dismount my bike due to a sharp pain in the back of my knee. Big problem considering that we were miles and miles from anywhere! The pain came and went, and I was able to still make progress, up until around 4:30. By then we had been riding for 10 hours, and had covered a little over 31 miles. Thirty one miles of pretty tough terrain! Even though there was still plenty of light, we made the call to stop for the day to give my knee a rest. Fortunately, an OK camping spot with some nice shade was not far from where we were, so we pulled off the road and spent the rest of the evening relaxing. 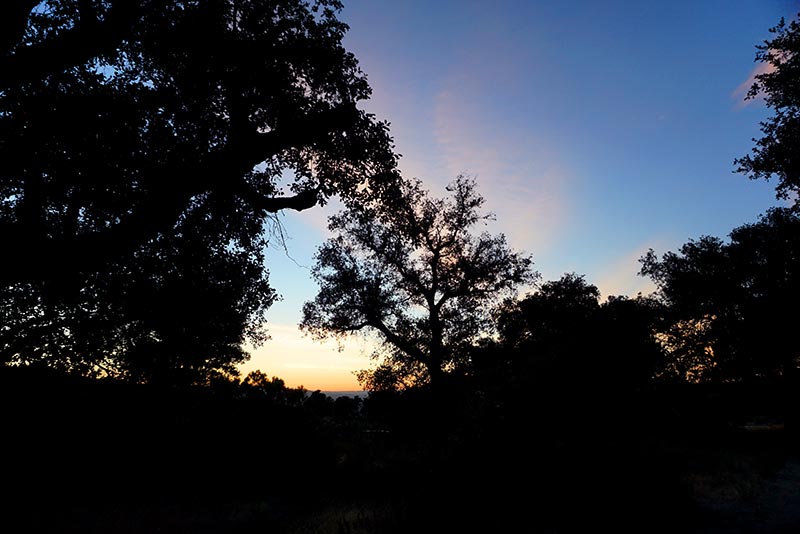 It’s amazing how the temperature varies from day to night. I have to say, we’re pretty happy with our sleeping setup. Our Tarptent only takes us a few moments to set up, our sleeping bags (quilts actually) are warm when we’re wearing our long johns, and our fold-up sleeping pads are the bomb. In fact, they may look funny strapped onto the front of our handlebar bags, but those pads are one of the best equipment decisions that we have made. We use them even when we take breaks because they are so quick and easy to deploy, and we don’t need to be worrying about puncturing them. I can only imagine what an inflatable one would be like. I bet I’d forever be dealing with patching holes just like we did with our inflatable dinghy on the boat!

This is the route we are attempting to follow. Can you find Ojos Negros, where we are now? 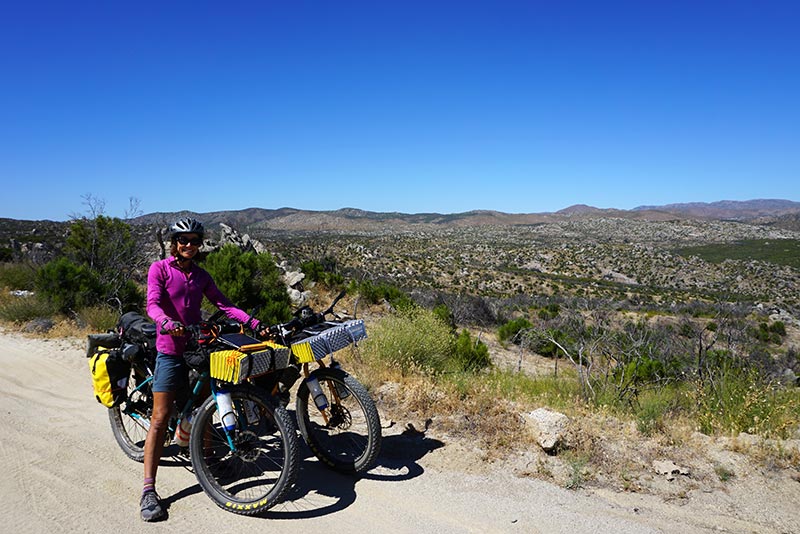 Shoutout to Tumbleweed Bikes, and Rogue Panda bikepacking bags. Everything is working perfectly!

Our cruising friends could likely relate to this analogy. Imagine you are motoring from place to place and your boat develops engine problems. You pull off to an unplanned anchorage where you make repairs. The next day you set off for your intended destination, but the entire way all you can think of is the engine, wondering if your repair will hold, and if you’ll make it without further troubles. That is exactly how I felt the day after my knee started acting up. With every pedal stroke, and every step I took, all I could think of was my knee. Fortunately, I felt no real pain. That is, not until we had again been pedaling for close to 11 hours. By then we had covered over 40 miles, and were within spitting distance of our intended stopping point, Ojos Negros. Or so we thought.

Click the above to view a much larger panoramic image. 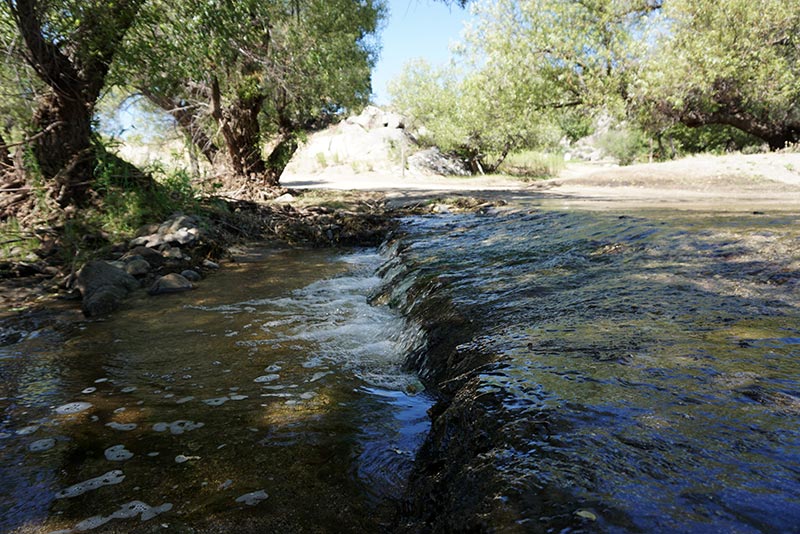 Flowing water, in the desert. Not likely going to come across that too often! 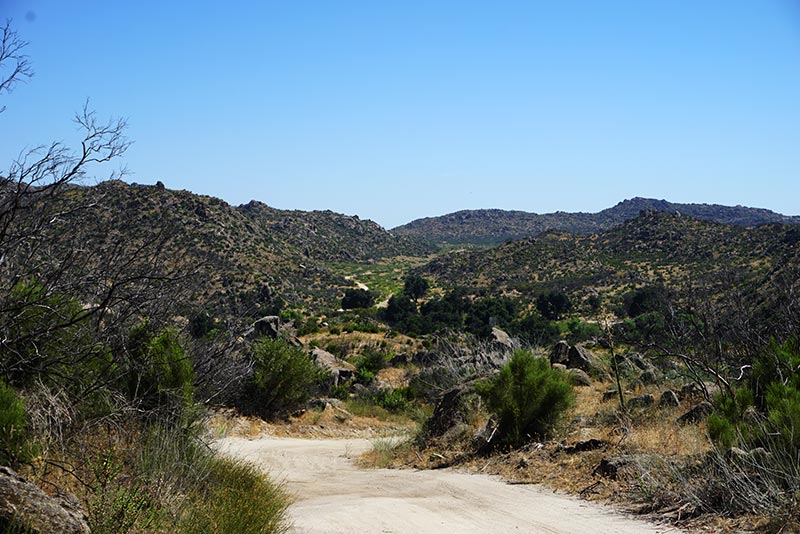 Due to a miscalculation on our parts, we actually had an additional four miles to travel before we reached Ojos Negros. And as luck would have it, we had the trifecta of bad riding conditions for that final four miles: deep sand, washboard road, and a headwind. All we needed was an uphill grade and fast-moving traffic to make it perfect!

Ultimately we made it, and as we had imagined, tacos and a warm bed at a $20.00 hotel were waiting for us. We’re taking another full rest day today before setting off further south tomorrow. Our destination, 2 days further on (we’re trying to take our time, where possible), is Ejido Uruapan. Reportedly there are hot springs nearby that spot. The adventure continues! 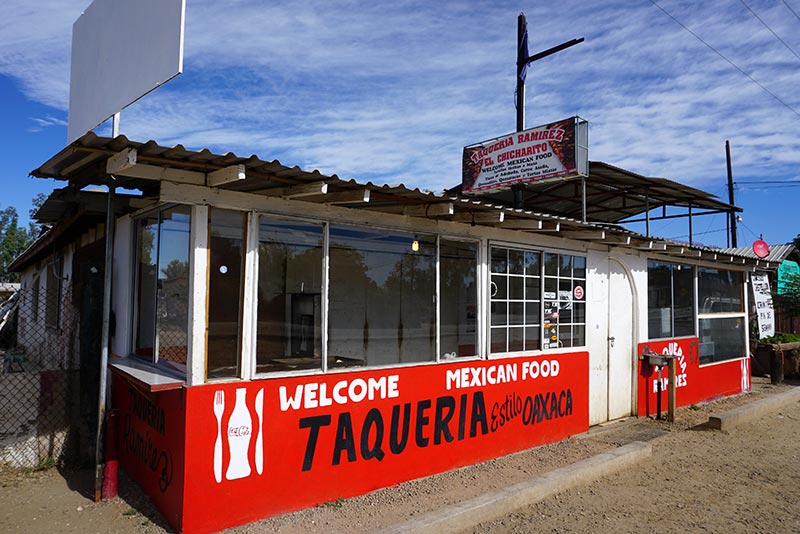