I have had several reasons to be thinking about catamaran designs in the last little while, specifically larger ones in the 40-50 foot range. For those who are still unclear about the specs of our vessel, Zero To Cruising is a PDQ 32. Her LOA (length overall) is 32 feet and her beam (width) is 16 feet. Although we are very happy with her, as far as cruising cats go, she is small. In fact, in just about every anchorage south of Georgetown, Exuma, she has been the smallest catamaran in the anchorage, and in most cases, by a lot. I mention this only to illustrate that, when we’re talking about 40+ foot cats, they are all huge compared to our boat. HUGE!

The other day, we happened to dinghy by a particular cat in the neighboring anchorage and its design caught my eye. I am pretty familiar with most productions multihulls and although I have never been on one, I was quite sure that this was one of Chris White’s designs. For those unfamiliar with the Chris White Atlantic Cats, they have a unique forward cockpit which allows those on board to move with protection right up to the base of the mast. It’s quite a unique design although I think now that it may have been adopted by the larger and $$$ South African Gunboats.

The following day on the radio net, we mentioned that we had an electric coffee maker to give away and coincidentally, the first person to respond was the captain of that cat, Pegasus. I told him that I had just been admiring his boat the day before and that not only could he have the appliance but that we’d deliver it to him. 🙂 Of course, he offered to give us a tour and while onboard, we learned that he, his wife and two kids had just completed a circumnavigation on Pegasus and that it was now up for sale. For a mere 339k some lucky new owner will be able to take over where they left off. If only! 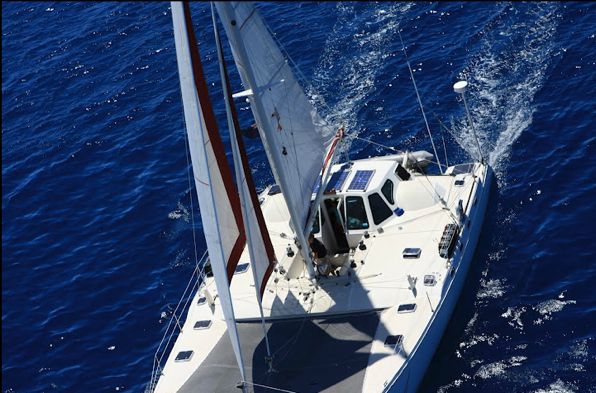 The design of this boat, with it’s very protected helm seems, at least to me, to be the polar opposite to some other expensive catamaran designs. Specifically I’m thinking about the Catanas although there may be others. At the risk of pissing off any of the owners of these beautiful and pricey boats, I can’t imagine WTF the manufacturers were thinking when they came up with their designs! If ever there were boats that seem ill-suited to sail in the elements, it is these. Catanas have helm stations which are set as far back on the boat as possible, and on every one we have seen, without any protection from the wind and the seas. Perhaps Catana owners will argue that most steering is done by autopilot but it would be foolish to believe that this is possible in all conditions and situations. No, when selecting a boat for cruising, I’d personally give these expensive beauties a pass.

The most commonly sighted cats around here in the 40-50 foot range are Lagoons, Leopards and Fountaine Pajots. Many of these are owned by charter companies and of those that are not, a selection still began their lives in charter. We have not had the opportunity to be on too many of the latter models but we do have multiple friends who own Lagoons and think they are beautiful. In fact, we have spent a good amount of time on our friends’ Lagoon 440 Ainulindale, which they purchased new by the way, and it is a virtual palace. Of course, all boats have their issues and I’m sure these are the same. It should go without saying that if we did have a boat in this size range, we’d have a lot more room for toys and guitars!

Choosing a climbing harness: They’re not all created equal!

Not all hose clamps are created equal