Not a fan of that current!

We’ve now completed three passages to Trinidad, one overnight Thursday-Friday, one this past September, and a prior one on ZTC. Surprisingly, it has taken me this long to realize just what a B!TCH the northwest setting current effecting these waters really is! 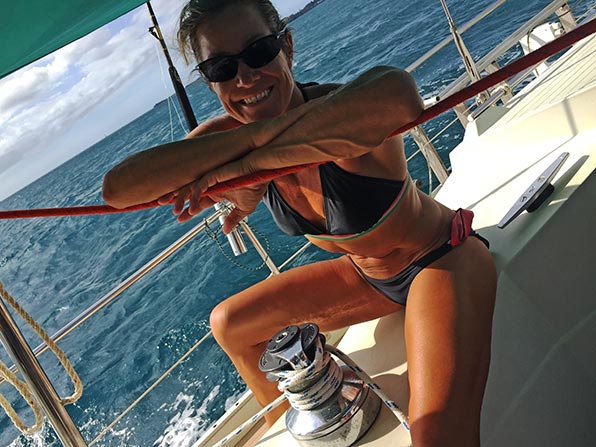 All smiles at the start. Will she stay that way? 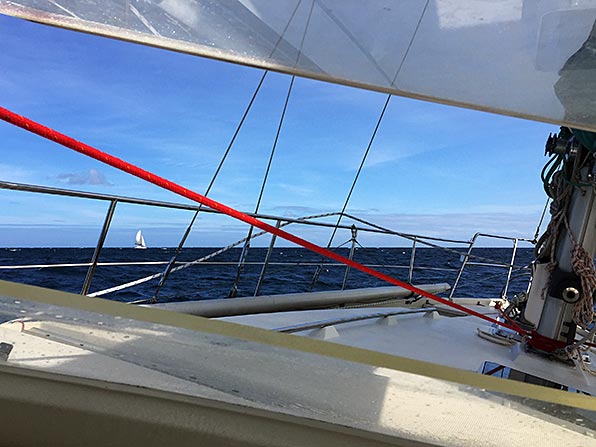 Right out of the gate we had this guy cross our bow. 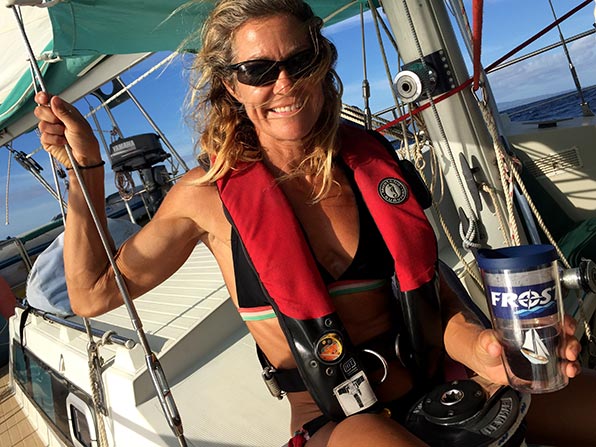 Coffee in our new Tervis glasses, not cocktails! 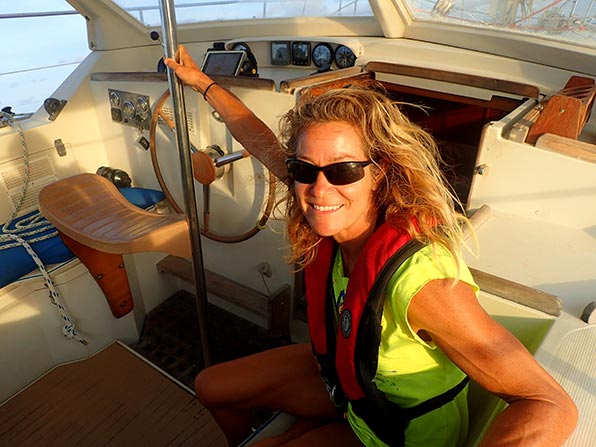 Adding layers of clothing. Believe it or not, it’s cool on the water when the sun goes down.

The chart has this to say about that current:

Equatorial Current (Up to about 2 knots).

The Equatorial current maintains a relatively constant northwesterly flow. Sets occur mainly northwest at average rates between 1/2 and 1 knot although 2 knots may be exceeded at times particularly southwards of 14?N. Currents increase in both variability and strength in the vicinity of the channels and islands, and strong onshore sets are common on the windward side of the latter, sometimes attaining 3 knots. 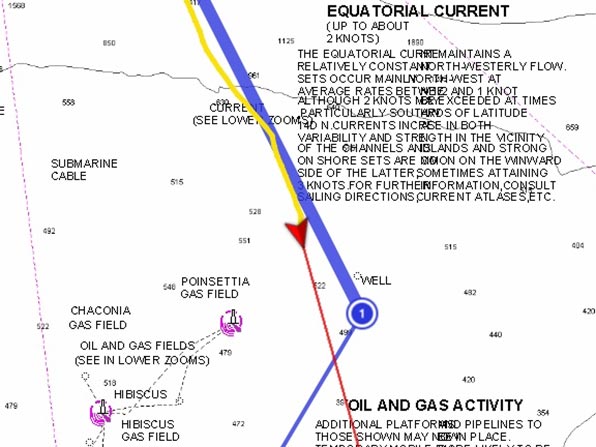 In the above image you’ll see that the little red arrow, which represents our boat, is traveling SSE, against the current! I can assure you that in spite of relatively favorable conditions, and plenty of canvas up, we were moving painfully slow.

We really shouldn’t complain though, and we weren’t. As we began the passage, moving along nicely with decent wind and waves, Rebecca spoke the words that we’ve each said countless times, “If the entire passage stayed just like this, it wouldn’t be too bad.” Well, for once, it pretty much did! We were able to reach the entire way with wind frequently on the beam, and the seas didn’t build to become anything approaching uncomfortable. That is not to say that there wasn’t a fairly large swell because at times, there must have been. I say that because the large oil platforms that we passed in the night would often disappear to us as we dropped into the trough of the waves. Frost rides extremely comfortably though and we enjoyed the ride, long though it was. 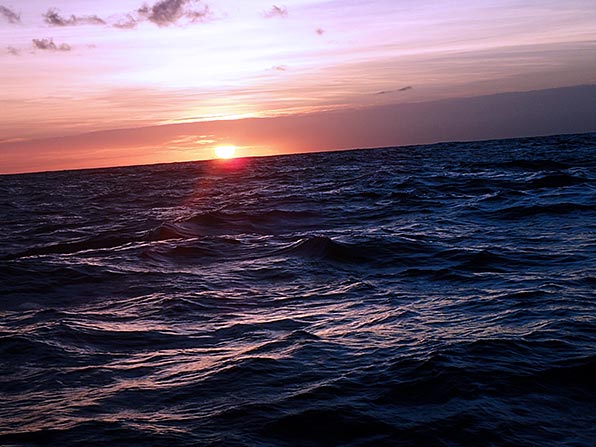 The slowness of the passage was increased by the fact that we sailed more than 15 miles east of the typical Grenada-to-Trinidad sailing route to minimize the chances of running into any “tiefs.” We also, as was recommended, sailed without any lights on. With a quarter moon in the sky, the evening started out quite brightly but by the time we neared the region of the oil platforms, where boats had been robbed in the past (during daylight hours), the moon had left us with a fairly black sky. Given how far off the rhumb line we were sailing, we weren’t at all afraid of any pirates, nor any large ships as we were keeping a good watch. What we did have to look out for were any other crazy sailors heading north, running dark as we were! Fortunately, we didn’t come across any of them. The few boats that we did see were all miles away. 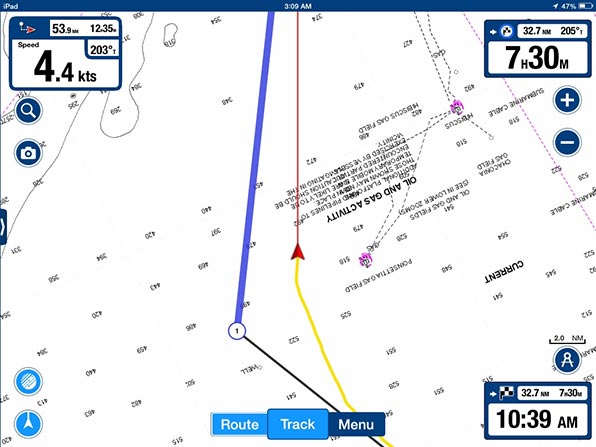 Cutting the corner. We had travelled far enough east!

As the sun rose to greet us, Trinidad was visible in the distance. We celebrated the morning with more coffee and a nice hot breakfast. Yes, there was bacon! Later, we were treated to both a short lived rainbow, sans any rain, and a brief visit by some dolphins. Sights like that always make our day! 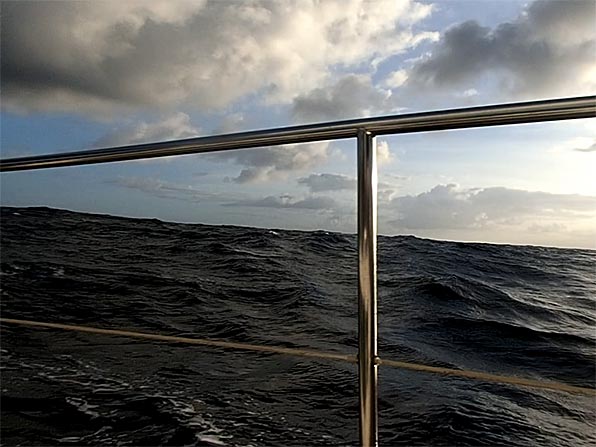 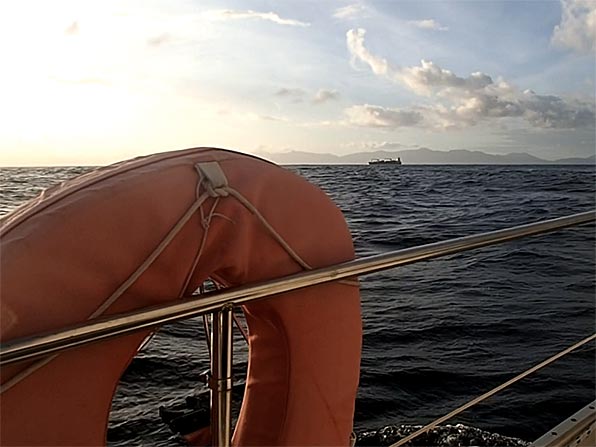 It’s easier to dodge ships in the daylight. 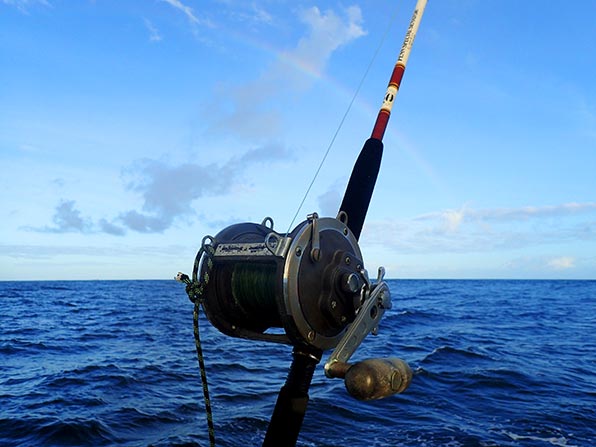 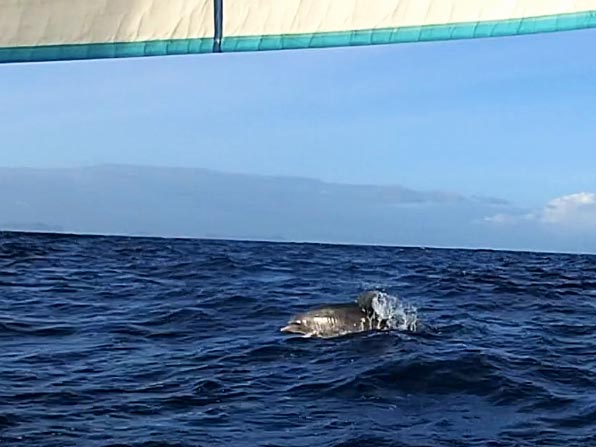 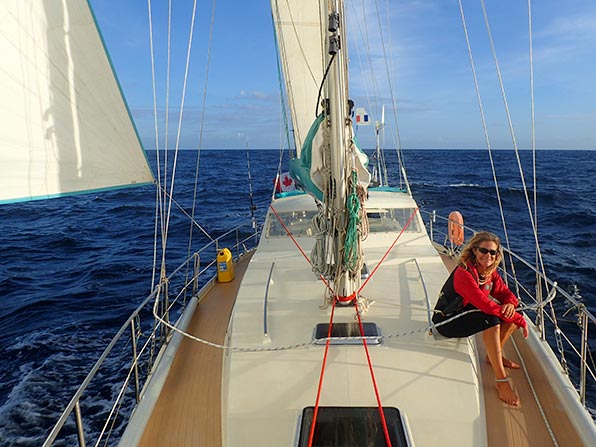 Isn’t she color coordinated? She dressed to match her PFD.
And yes, we’re both clipped in to the jacklines. 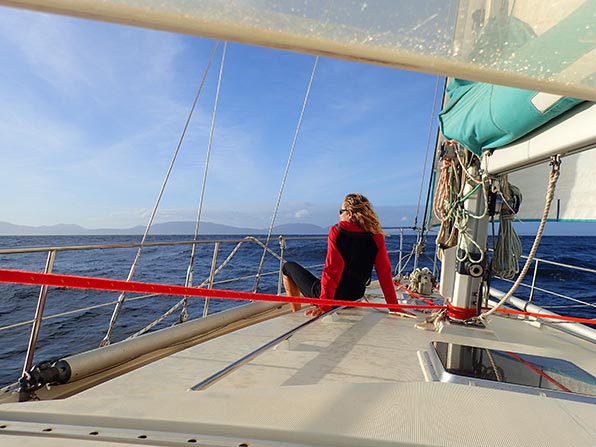 Waiting for the dolphins to return. 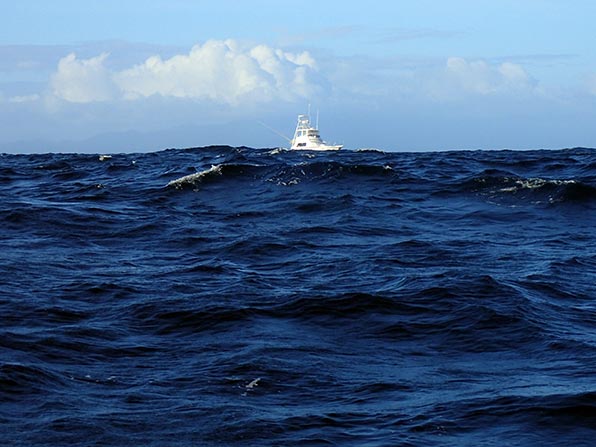 Glad we weren’t on this boat. It did not look comfortable!

Strange as it must be for non-sailors to comprehend, the sketchiest parts of a trip always occur as we near land. The Bocas de Monos, the narrow entrance that we use to pass from the ocean into Chaguaramus, always has a strong current. With a large northerly swell pounding the rocks all around it, the pucker factor of that channel was increased exponentially. Just before arriving to the entrance, we had dropped our mainsail but we kept a reefed genoa and our mizzen set as we motored through it, just in case. As always happens, we had to share the narrow channel with a large boat, and outgoing ocean tug. I don’t know why that always happens to us but it does!

The second sketchy part of a trip to Trinidad is always docking to clear customs and immigration. The dock that we are required to use is down a busy, narrow channel. While negotiating this channel we had to dodge a boat under tow, a large sport fish blindly backing off the dock right in front of us, and a mega yacht, albeit a baby one, making his way off a dock. After all of that, we then had to see if there was room on the customs dock for us, always a question. As it turned out, there was, but just. With no one to help us with our lines, just a family on the pier sightseeing, we did the best Captain Ron imitation we could muster, inspiring praise from the onlookers.

It was 2:55 PM when we sailed out of Prickly Bay Thursday, and 11:20 AM when we docked in Chaguaramus. Customs and Immigration, and a couple of frosty beverages were waiting for us! 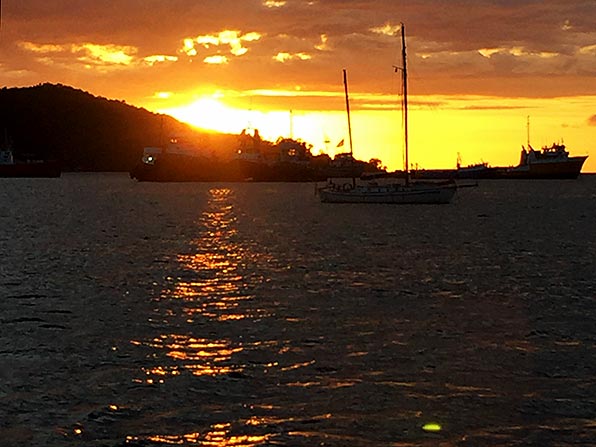 Chaguaramus at sunset. It was an early night no bed. Neither of us lasted until cruisers’ midnight!
10:53 am

Are you in the stander camp, or the sitter camp?