Things that go thump in the night

When strange sounds occur on a boat, those who are in tune with it always hear them. That doesn’t mean that they always get up to do anything about them, especially if such sounds occur in the middle of the night, but they do hear them. Take last night for example. Just about 2:00 AM I heard a thump. Now, this thump could have been caused by a whole bunch of different things but because our boat was rocking so much in the rolly anchorage, I attributed it to an object falling off one of the salon seats and landing on the floor. Annoying, yes, but not requiring me to raise from my comfortable sleeping position. When, shortly after that, the second thump occurred, even louder than the first, I was awake enough to register that it was coming from our stern. This definitely required investigation. The thumps were either being caused by the noisiest burglar ever or perhaps something equally as bad.

When I stepped out on deck the source of the noise was all too clear, the Italian boat which had been anchored a suitable distance beside us was now playing bumper boats with our stern. I immediately moved to fend off the boat, easily pushing its large bowsprit away in the dead calm night air. Our neighbors must have either been resting in a stern cabin or sleep like zombies because they never did awake. It’s probably a good thing too as I’m not sure how they would have reacted to the sight of a completely naked man clutching onto to their bowsprit!

Rebecca was up to assist in short order though and once on deck to take over for me, I was able to deal with my lack of clothing. With adrenaline having done away with my sleep-induced stupor, I set about taking in some of our anchor rode to move us further away from our neighbors.

Was I able to get right back to sleep? Negative. For the first while I’d sit up every few minutes to ensure that we’d continue to swing clear of the other boat. Even when convinced that all was well in that regard, it still took me a while to return to sleep.

Our neighbors? Oh, they slept fine. In fact, by 6:45 AM they were up and at ’em, ready to fire up the loudest diesel engine/generator ever. I’m glad we’re leaving here today! 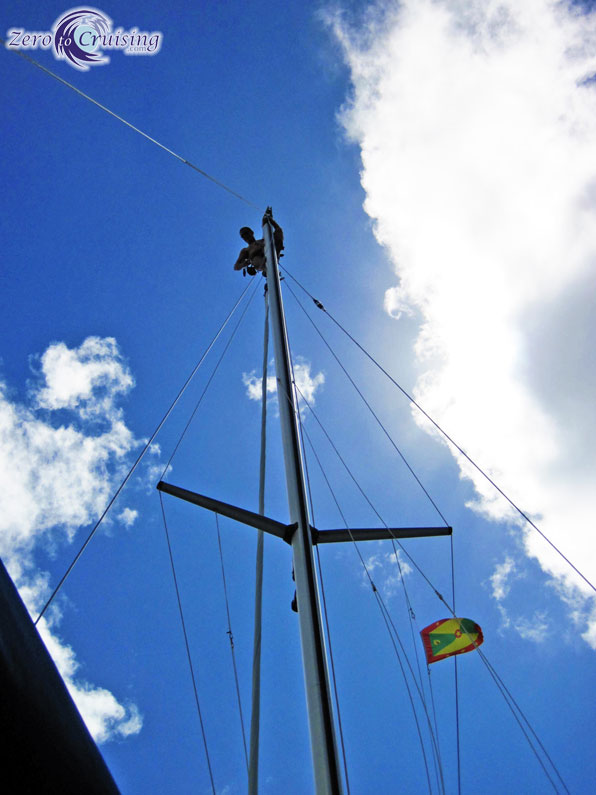 As we set sail for Trinidad later today, our Grenadian flag will be coming down.
We’ll miss our friends here.

For those who don’t read the comments, here is a follow up to yesterday’s post. Rebecca and I visited a local computer store yesterday and purchased the cheapest Mac-compatible Microsoft mouse that they had. It was very tricky getting our computer’s system set to ignore the trackpad with a trackpad that wasn’t working! I did manage to do it though and guess what, the mouse is working. Woo hoo! And it only cost 45 EC too. Of course, this is simply a workaround, not a fix. There is still a problem which needs to be resolved. One step at a time, and one computer at a time.

There are times when you don’t want a reminder