One of the items that we have listed on our huge “to fix/purchase” list is a new stack pack. Or, since Frost is a ketch, perhaps I should have written “two” of the items? The material on Frost’s present stack packs is old and faded, and the stitching has given way in many spots. Instead of getting new ones made, we could just have the ones that we have repaired. The old name of the boat is clearly visible on the sun bleached fabric of the main’s stack pack though, and simply covering that up with a patch of new fabric would look kind of silly. All that said, what we’re talking about is predominantly a cosmetic issue, so having new ones made is fairly low on the priority list. 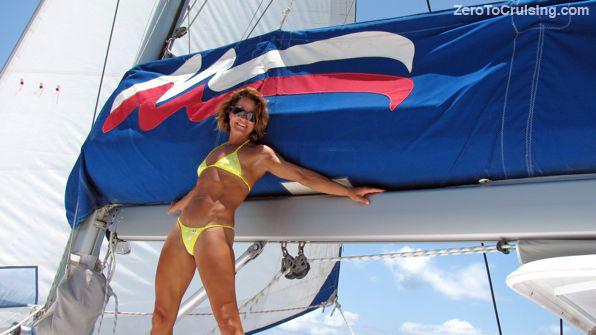 Should we actually go the stack pack route at all though? As an alternative to replacing them, we could just have new traditional sail covers made. That is what we have on ZTC (with separate lazy jacks), and the people we know here that have a similar vintage Amel Maramu have normal sail covers on their boat too. Stack packs with integral lazy jacks do make sail handling easier, but some people don’t like the look. Options, options.

If it weren’t for those waves…