Yesterday around noon, just after Rebecca and I had paddled to shore to go for a walk, we watched as two guys on a very tiny sloop moored in front of One Love raise anchor and sail off. As they jibed their way out of the bay, we wondered what their story was. The boat was, as I said, tiny, and it had no headsail rigged. This was going to make things tough because by the time they cleared the airport runway, they were hard on the wind, and making extremely slow progress. I mean extremely slow! 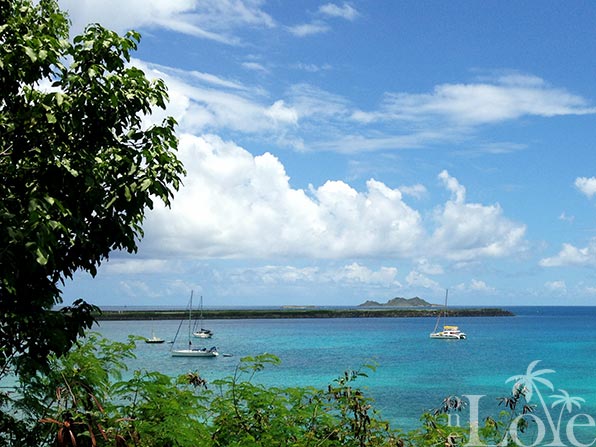 If you look closely, you can see the tiny green boat
at the front of the pack, just about to set sail.

Much later in the afternoon, as Rebecca and I sat on the trampoline enjoying a glass of wine, we saw the little boat slowly making its way back into the bay. I fully expected these undoubtedly experienced sailors to head right for their mooring (while paddling around we took note that they had left a small fender on a line in the spot where they were anchored), round up into the wind and tie off to it, all without burning a drop of fuel. They were moving slowly though, and were at that point behind One Love, so we couldn’t actually see all that was going on. When I finally got up to look back to figure out where they were, I could see that they had dropped their sail behind us, and with the boat relatively close to the shore.

It’s important to point out that this little boat had no engine, and now without a sail up, was without propulsion. Were they planning on anchoring there? Nope. We saw that instead, they had given up on sailing to the mooring and were going to try to tow the boat with the little tender that they had been towing (the tender was probably half the length of the boat).

I watched as they first tried to tow the sailboat with it from the bow. Even as small as the boat was though, it was still too much for the little outboard and when the wind would catch it, they would get blown off. As close as they were to shore, I had a bad feeling while watching this that things were going to get ugly for them. They next tried to move the boat by hip-tying the tender to it. Rather than wait to see if that was going to work, Rebecca and I quickly dropped our tender in the water and headed over to see if they needed help.

When we arrived on the scene to offer assistance, we were surprised to have the sailboat’s grateful crew admit to us that this was their first time sailing and that they didn’t really know what they were doing! They told us that they had only recently purchased the boat and had just taken it out for a practice sail.

As readers here know, it wasn’t all that long ago that Rebecca and I were in almost the same position as these two guys so I instantly felt some degree of empathy for them. As we secured a line to their boat to drag them away from the shore, I complimented them on the progress that they had made that day. After all, until that time, we thought that they must have been pretty experienced!

Even though we had no difficulty towing the sailboat with our big tender, it still took a bit of maneuvering to get them safely tied off to their mooring; a mooring which they shared was actually just a second anchor that they had been unable to retrieve from the bottom. When we left them they were obviously thankful for our help, and I could sense a bit relieved to have their day’s adventure concluded. Even after all that drama, I still think they did a great job. Before they try that again though, they probably should figure out a bit better strategy for ending their day on the water. 🙂

Passage to Bimini – The dirty details

So close we can taste it!

Getting connected in Antigua