Apparently there were some who were not amused by my April Fools Day joke yesterday. I apologize for causing any of our friends unneeded worry. As a small offer of penance, I share the following important tip for those hoping to visit Statia.

Oranje Baai can be rolly. The author of our guidebook says that the worst he has ever rolled at anchor in the Caribbean was here, just off Oranjestad. To tell the truth, I’m not sure if it’s ever not rolly here but it’s hard to tell as, since we’ve been here, we’ve had a north swell and when that subsided, south wind, both of which are famous for generating uncomfortable conditions. To minimize the effect of that roll we moved our boat into, what we feel, is the best spot in the anchorage. If you look in the pic below you’ll see that we’ve tucked in south of all the mooring balls, in between them and the pier. We’re anchored in 12 feet of water with a beautiful sandy bottom, sheltered as much as possible by the break wall. The holding is great, thoroughly tested by the very gusty conditions that we experienced yesterday. Are we still rolling? Yes, quite badly as a matter of fact (more penance?). We are certainly rolling much less so than the other poor vessels further out in the anchorage. It is so bad where they are I actually feel sorry for them! 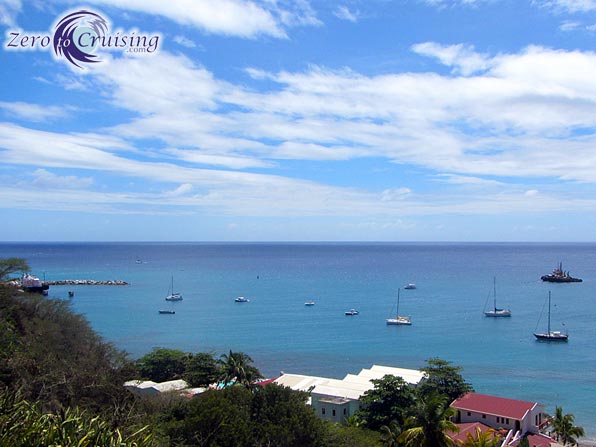 ZTC is the furthest boat to the left in the pic. 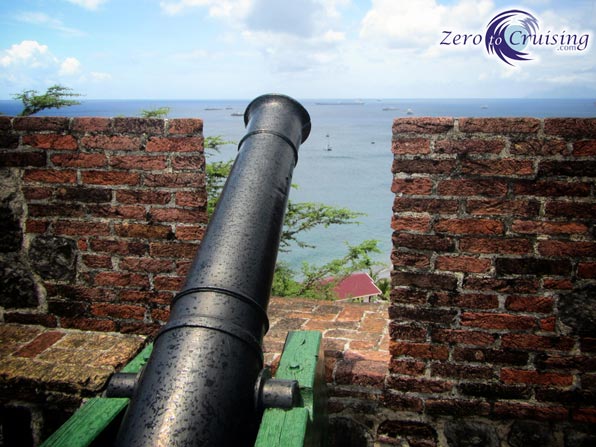 Yes, that is ZTC out in the water in front of the cannon.
If the cannon was functioning do you think they could hit her?

Great news. Finally we will not have to read endless posts about hiking around some dumb island, nor partying with your friends, or exercising on your trampoline. Now maybe we’ll get some good posts about fiberglassing, sanding, spending money. etc. Have a great April 1st day.

Another nail in the coffin?