In order to escape the nasty NE swell that had moved in, Rebecca and I left Cane Garden Bay early yesterday and headed westward, motoring along the coast of Tortola with light winds directly aft of us. Eddie, our autopilot, was steering the boat and the engines were running at a steady 2800 RPMs, resisting the swell which was attempting to push us towards the shore. It was a relatively gentle run with only a minor amount of surfing effecting our speed. 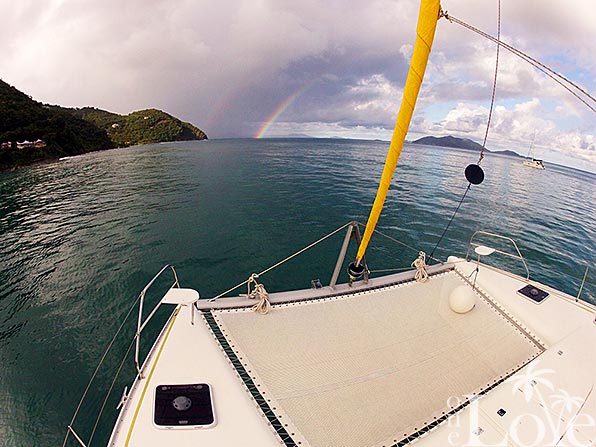 As usual, although the conditions were mild, we were paying close attention to the boat as we find that it talks to us continuously through its gauges, movements, smells and sounds. It was this awareness that caused us to notice a peculiar noise coming from the stern.

I should point out that there are always noises on a boat, especially when underway. The engines rumble, the boom creaks, and unused halyards can bang on the mast. Even the propellors make a “wurrring” sound when we’re under sail at a high rate of speed. Add to all this the sounds that the wind and waves generate as they have their effect on the boat. This was a new one though. This noise, which we would later describe as a groan, was intermittent so we didn’t think that it was engine related. We noted that it only seemed to occur when the larger of the waves, perhaps every 10th or so, pushed us along and the autopilot resisted its force to keep us on our heading. Taking turns, we each moved to the transom to listen. We opened the engine compartment door and again, we listened. Could it be the autopilot? Could it be the rudder, or perhaps the hull itself? Regardless, I didn’t like it, and immediately made some adjustments.

I don’t know what everyone else would have done in this situation but I quickly turned off the autopilot, reduced speed and headed away from shore at a right angle. Although this put us on a less comfortable heading, beam to the waves, the last thing I wanted was drama when we were close to a lee shore.

As luck would have it, once on this new heading, the sound failed to materialize again. In spite of that, we weren’t going to ignore it. We wondered, could there be something wrong with the rudder? Did we pick up another line? We couldn’t be sure until we dove on the boat and checked. The question was, where best to do that?

We initially thought that we’d go to Jost Van Dyke as that was where the boat was pointed on that heading, and we suspected that Great Harbor would be both calm and the water clear enough to see under the boat. Unfortunately, it was out of our way as our intention was to head towards Roadtown on the other side of Tortola. We decided then to change course again and make way to Soper’s Hole, hoping to find an available mooring to tie up to.

Twenty minutes or so later, without any additional drama or mystery noises, we motored into Soper’s and grabbed one of the few available balls. As soon we had the boat secure, I grabbed my mask and snorkel and jumped in the water. Note that this is the second time in as many visits that I have had to dive on the boat in Soper’s Hole, the last being to clear a line which had fouled our starboard prop. Fortunately, by this point in the day the sun was high enough that I had reasonable visibility in the water. What did I find during my inspection? Nothing. No, unlike the last time, there was no big line wrapped around the rudder or prop. Additionally, when I checked both rudders, neither felt as if it had any more play than the other. Where did the strange groaning sound come from? It remains a mystery, hopefully to be solved another day. 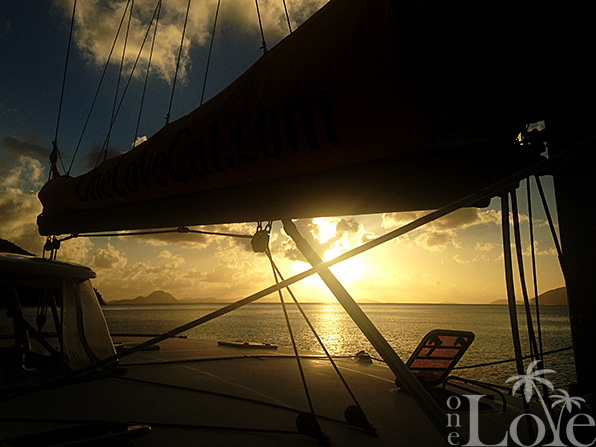 Was some tech writer drinking on the job?

We now know where we are!