The language of nautical lights

A couple weeks ago I wrote about cardinal marks, and ended the post with the challenge to name the specific location of one in the Caribbean. One person did meet my challenge on Facebook, pointing out that a cardinal mark is positioned just off Clifton on Union Island. Unfortunately, not a single person responded on the blog post itself. 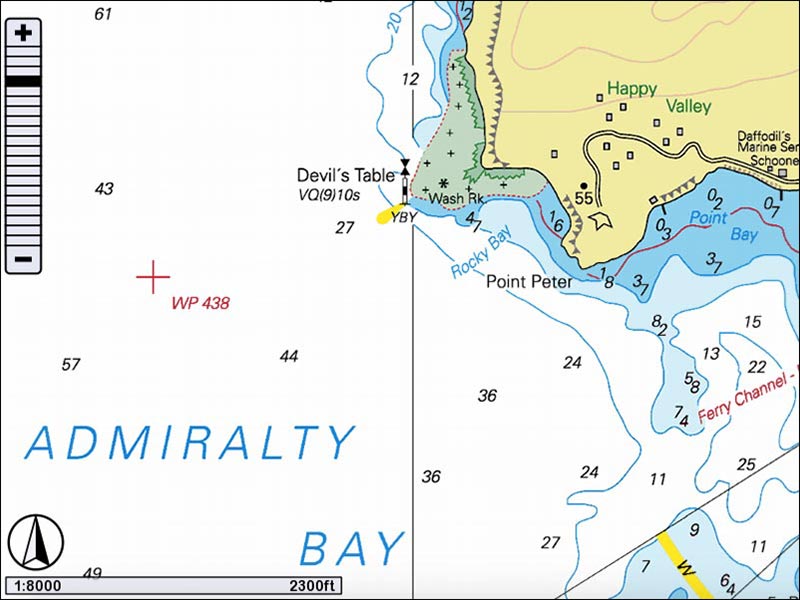 Well, as it happens, I recently took note of another one myself, not far from where we’re anchored right now as a matter of fact. Just off the Devil’s Table in Bequia, a cardinal mark warns mariners to pass to the west of the large reef. The funny thing is, I only noticed it at night when I spotted the mark’s white light flashing 9 times (funny only because I wrote in that earlier post how I used to have trouble with the light signals).

How I remember which cardinal mark is which:

Always being the annoying teacher, I quizzed Rebecca to see if she knew what the mark was off our port side. Unfortunately, from where she sat, her view of the cardinal mark was obstructed. What she saw instead was some misguided sailor, not far from the cardinal mark, making his way towards the harbor with a bright white strobe light flashing on top of his masthead. Not only was this confusing to Rebecca, it also seemingly threw off the captain of the huge ferry that was steaming up behind the sailboat. I say that because while we were both watching, the ferry turned on a massive spotlight, illuminating the sailboat as if to say WTF?

Just don’t do it!

I’ve ranted before about cruisers who turn on strobe lights at anchor (just don’t do it). Running one while underway is even more stupid, unless of course you’re in distress, and are trying to call attention to yourself. Nautical lights are meant to talk to us, but they only work if we’re all speaking the same language. Just imagine if someone typing out morse code decided to throw in some extra dots and dashes, just so that you’d pay more attention to them! Stupid, right?

Leave the flashing reds and greens to channel marks!

While I’m ranting about lights, please people, get rid of the flashing red and green ones too. Yes, we’ve seen both. In fact, I specifically remember two vessels, anchored just outside the marked channel in a Grenadian anchorage, that sported lights like that, one red and one green. It was as if they had gotten together and actually planned how they could add confusion to the already well lit anchorage. End rant. Have a nice day, people!

You don’t have to outrun the bear

Our morning so far

You know what I really wanted to write about today?

Get a multimeter and learn how to use it!