The coolest features on our Amel Maramu

The other day I responded to a sailor’s request for ideas on how to design a swim ladder for his high-freeboard boat. I posted some pics of the Amel swim ladder which, from what I have seen, is one of the best out there. That exchange inspired me to write this post, a list of our favorite Amel-isms, the features that are unique to this design of boat.

When you spot a ketch on the water, the first tell-tale sign that it is an Amel is the hard dodger shielding the cockpit. While not the only model of boat that has such a thing, it is a feature that has remained constant through each of the Amel builds. Even though it is occasionally warm in the tropical sun, the dodger makes the cockpit feel very secure, offering excellent protection from the elements. 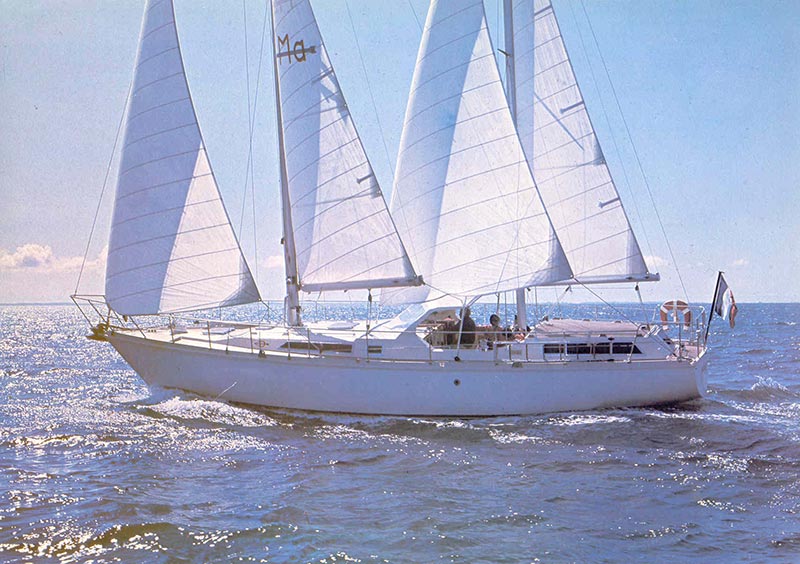 I love KISS solutions, and the Amel’s water tank gauge is the epitome of that. It has no electronics to go bad, and no needles to get stuck. It’s just a rod with a float on the bottom which rises or falls with the water level, showing the volume remaining on an easy-to-read scale.

Our Amel’s fuel gauge is almost as good. It’s simply a dip stick with fuel markings on it, attached to the diesel fill cap. If it could be read from inside the boat as the water gauge can, I’d consider it equally as cool. 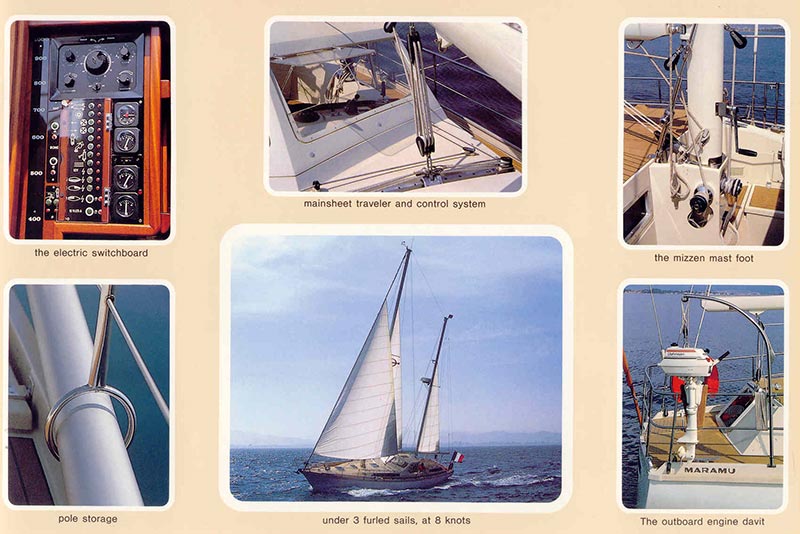 You can see the markings for the water tank gauge on the left edge of the top left image.

Right up there on the KISS solution list is the Amel method for securing all of the external lockers. Every one, including the engine room, can be locked by one of two methods: 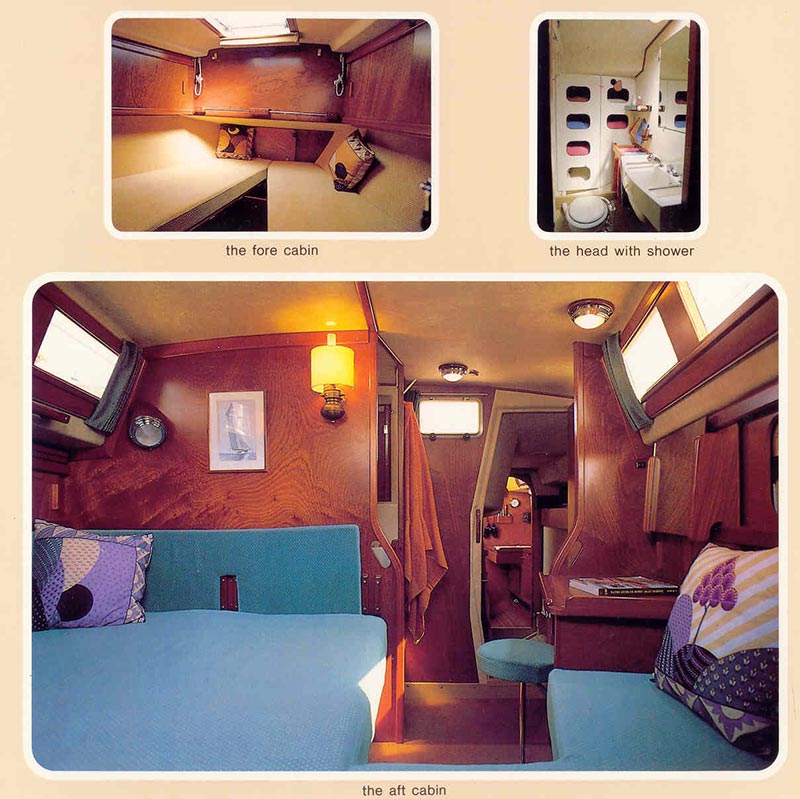 Note the cords and the cleats in the top left image. They are there to secure the bow lockers.

When Amels switched from shaft drive propulsion to a type of sail drive (I think they call it a C drive), they lost what I feel is a very cool feature: the shaft alternator. When boats are sailing with the autopilot and other electronics running, there can be a big drain on the batteries. By allowing the prop to spin, our shaft alternator can keep juice coming into our batteries instead of letting us get into electrical debt. That is assuming we’re making at least 5 knots, of course.

Edit: I have been informed that certain C drive models were also made with a shaft alternator. 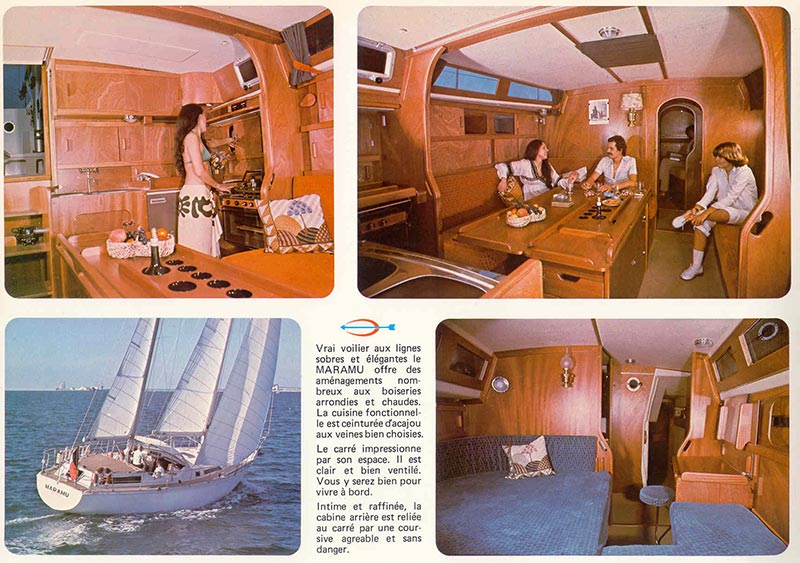 The Maramu bottom left could be charging its batteries while sailing.

One of the best safety features on an Amel are its watertight bulkheads. Our Maramu has two: one blocking off the bow/chain locker, and a second blocking off the entire V-berth and forward head. I understand that newer models have also one blocking off the aft cabin. I had a surveyor tell me that he actually knew of one boat that put the V-berth bulkhead to the ultimate test. Not only did the boat remain afloat with the forward area flooded, it was also able to continue to make way! 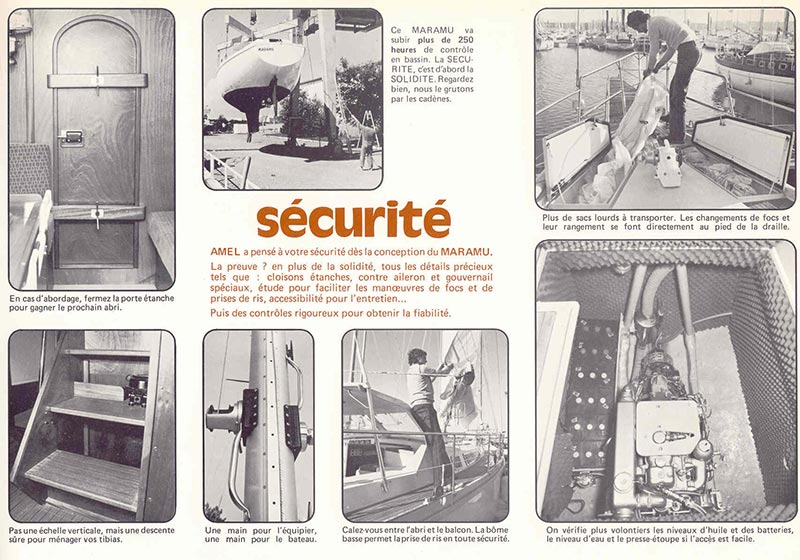 The top left image shows the V-berth’s water-tight bulkhead in its sealed position.

While not quite as ingenious as the previous items, I love the Amel’s excellent engine room access. No one likes having to hang upside down to access important parts, or to use a mirror to see what’s happening on the non-service side of an engine. While some of that most certainly still does occur on an Amel, it is greatly reduced by the excellent access afforded by the huge engine room access door. 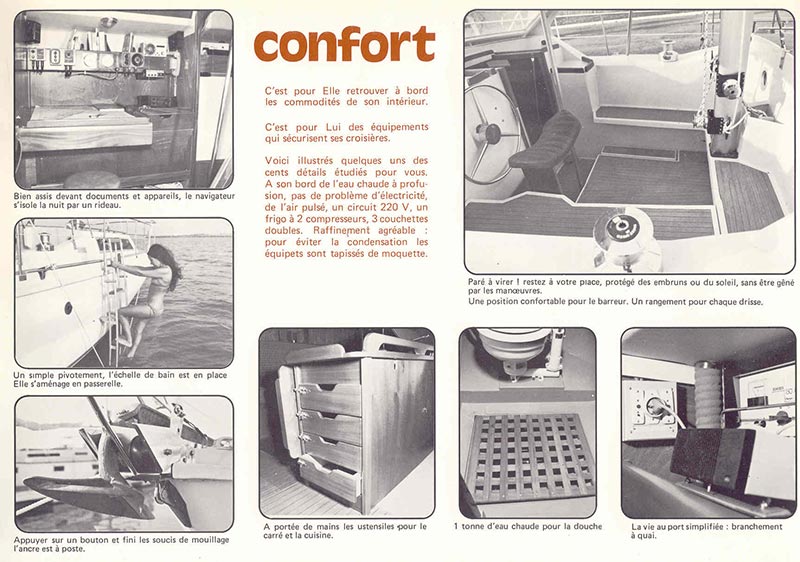 The entire floor of the cockpit (top right) lifts up on a hinge to give access to the engine room.

The Amel swim ladder is what got me started on this post, and it’s an amazingly well-designed piece of kit. With only one hand it can be moved from its stored position on the outside of the solid rail lifeline (which is also a cool feature) to the water. It can also be raised just as easily, pivoting on its attachment point. If that wasn’t cool enough, the ladder can also double as a passerelle for when the boat is med moored. A lot of thought went into that. 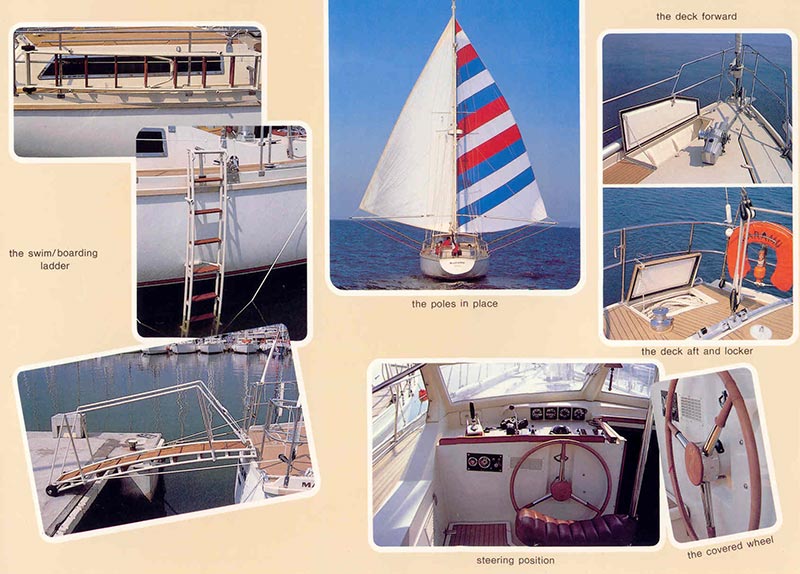 The three images on the left show the swim ladder raised, deployed, and mounted as a passarelle.

Note: All images are from original Amel brochures.

Was some tech writer drinking on the job?