While we would have been much happier to share dinner and drinks with our friends following our last charter, Mother Nature had something different in mind for us. The drama associated with what is now being called Tropical Storm Bertha began several days before the end of our charter. 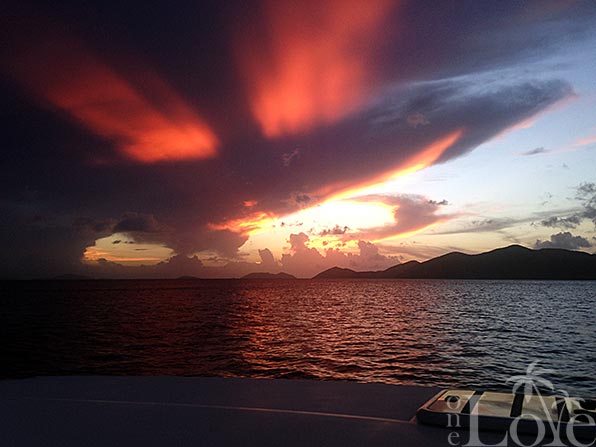 The sun setting by Jost Van Dyke as we motored to Virgin Gorda.

Always with an eye to the weather, we were closely monitoring the potential storm as it progressed westward in the Atlantic. Where and when would it make landfall? How strong would it become? How would this affect our travel plans? All of these questions were asked and re-asked of ourselves several times each day. All this came to a head for us when we found out the morning before our charter was to end that they had plans to completely close off Compass Point Marina, the base of operations for our charters. 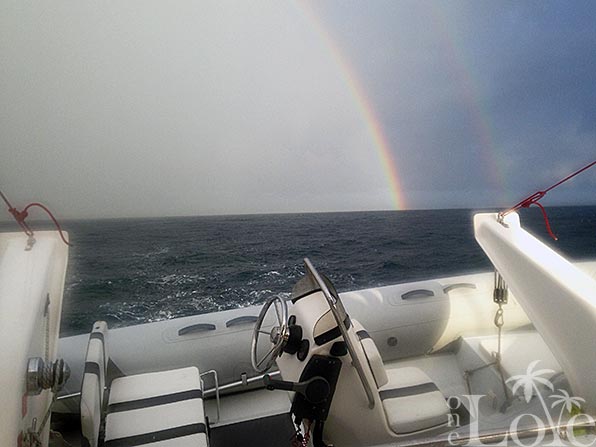 Apparently the marina’s storm plan includes blocking off the entire bay days before a storm is scheduled to arrive. We were aware of this but certainly didn’t think that we’d be around to be affected by it. While we could have cut our charter short by a few hours and dropped off our guests there early that morning, we quickly formed a Plan B. We would sail them further down the coast and drop them off in Charlottle Amalie, a location which is closer to the airport for our guests anyway. 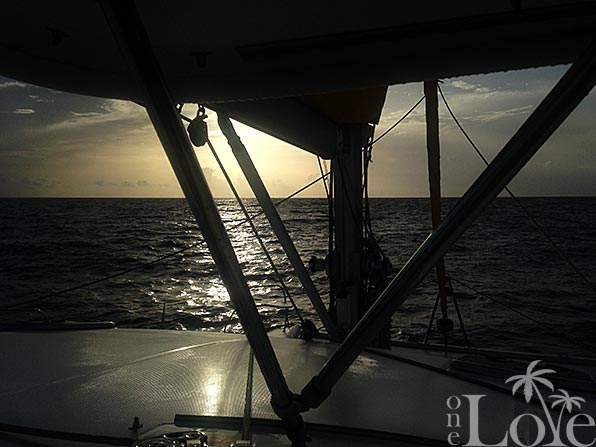 The sun in our eyes. We left at first light.

Our Plan B didn’t stop there though. Thinking that the weather would be unsuitable for travel for several days after the storm passed, regardless of where it made landfall, we decided to take advantage of the very small travel window and run the Leopard east to St. Maarten, further away from the storm’s projected path. After dropping off our guests, we refueled, purchased some groceries and readied the boat for a passage. One Love’s owner Michael was scheduled to arrive on a 3:45 PM flight so as soon as we had him on board, the three of us headed out. Our plan was to stage at Virgin Gorda for an early morning departure to St. Maarten. Now I should say that the passage to St. Maarten is not one of my favorites. We prefer to do it only when there is no more than 10 knots of wind forecast so that we can motor straight across in calm seas. We would not be so fortunate this time around. The forecast was for 15-20 with short-period, meter and a half waves. Regardless, we stuck to our plan knowing that the further east we could get, the safer we would be. 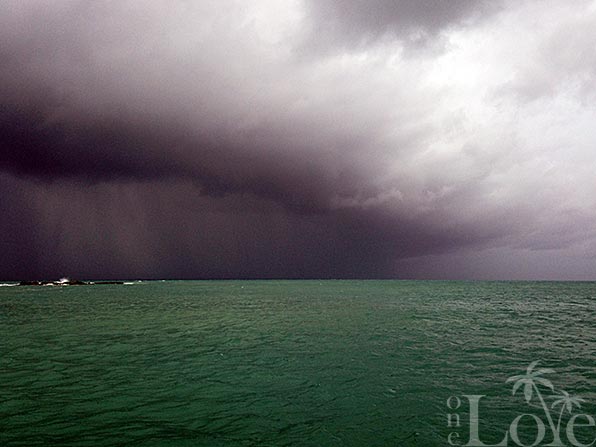 Squall. Yes, that’s what the sky looked like for much of the day.

The tone of that passage was set as soon as we left our anchorage in Virgin Gorda. A large squall descended upon us just off Necker Island, soaking us to the bone. In spite of changing clothes several times during the trip, and wearing a rain coat the all day, we would remain wet for the entire passage. Imagine the sea state required to splash waves up into the helm of a large boat like a 4600. Now imagine that occurring every 30 seconds or so. That was what the passage was like. Not dangerous but certainly uncomfortable.

Eleven and a half hours from the time we departed Virgin Gorda, with the sun getting lower and lower in the sky behind us, we made our way into Simpson Bay on St. Maarten. While we wanted to do nothing more than drop anchor and take a warm shower, the Dutch Coast Guard had other things in mind for us. They wanted to board us for a routine inspection. What can you do except smile and say “welcome aboard?”

As we drifted in the bay with our engines in neutral, five guys came on board from a large RIB. They were very polite but thorough, searching in our lockers with a flashlight, checking the expiry date on our flares and writing down all of our passport and boat information. The entire event lasted only about 20 minutes and we completed it with smiles on our faces. As soon as they left though, we immediately proceeded to find a protected spot to anchor.

While it was our intention to ride out the storm from inside the protected lagoon, we had missed the last bridge opening, as I knew we would. Our plan was thus to anchor outside and enter on the first bridge opening the next morning, just before the weather was scheduled to really deteriorate. There are two general places to anchor in Simpson Bay. While we observed a large schooner anchored over by the long beach, I opted instead to tuck One Love into the corner behind the break wall. This would prove to be a wise decision!

By the time we awoke the next morning, the weather had gotten much more ugly. The skies were extremely dark, the wind was gusting well over 30 and large waves had started rolling into the bay. At times rain came down so heavy that we couldn’t see across the anchorage. The bridge wasn’t scheduled to open until 9:30 AM though so we had little to do but wait.

Not long after we woke, we heard a Mayday call on the radio. This happens from time to time and given the weather, was not at all surprising. My ears perked up though when I thought I heard the person on the radio say Simpson Bay. I asked Rebecca to check our GPS coordinates against what the radio operator had just announced and sure enough, it was basically where we were. We got our binoculars out and immediately could see that the schooner we saw at anchor last night had washed up on the beach. Not good!

At this moment in time the weather was bad! While I had no desire to try to make our way over to that boat in our tender, I thought that I’d better offer in case they needed help getting people off the ship. I tried hailing the grounded sailboat a couple of times with no reply. I then heard him come back on the radio to say that everyone was safely on shore. I assume he was ferrying people to the beach when I had called him. The captain sounded quite calm at the time. He said that all 11 crew members were safe and that there was nothing more to be done at that time, they’d just have to wait until the storm passed.*

Our drama wasn’t quite over though. We still needed to get inside the lagoon. The problem is, if the wind is too high, they won’t open the bridge. In that case, we would have been stuck outside. If that had occurred I’m confident that we would have been OK. We were tucked in well with our anchor in sand and plenty of scope out. It just would not have been comfortable.

I spoke to the bridge tender a couple of times. He told me that he figured that they would open so that we should raise anchor at the appointed time and stand by. I told him straight out though, knowing that they like for boats to approach close to the bridge and stand by before they open it, that would not be possible with a 30 knot cross wind. He said no problem, “There will be no yelling today. Do what you think you should do to stay safe.” That was exactly what I wanted to hear.

At 9:15, fifteen minutes before the bridge was to open, we began to raise anchor. Even that was a bit of a challenge with the unoccupied boats nearby us swinging around. We got the anchor up though and began doing donuts just outside the channel. At about 9:20 the bridge tender hailed us to say that he thought they had a break in the wind so he was going to open early for us. Awesome, except that as soon as he said that, it started blowing over 30! We waited a moment for the bridge to begin opening and then picked our line and went for it. I think we blew through the bridge at about 6.5 to 7 knots. Even though the opening is 50′ wide, when you’re taking a 25′ wide boat through it at high speed, it seems close!

Safely inside the lagoon, we had only one more thing to do, find a spot to anchor. We motored over to a shallow spot which looked like sand and dumped out a lot of chain. I think when all was said and done, we ended up with about 12:1 scope. I had no intention of dragging like that schooner should the weather get much worse. As it would turn out, the lion’s share of the bad weather would pass within an hour or so. The large amounts of rain which we had heard would fall throughout the day never came and the wind never gusted much higher than 25-30. This particular drama was over for us. Our Plan B worked.

*We walked over to the beach yesterday to see the grounded boat and just as we were approaching it, a large tug pulled the sailboat free. We then saw a smaller boat tow it into the lagoon, I assume to get hauled out.

Rolling with the punches