As the world turns

Let me tell you a story. This story isn’t a tail of love and passion, nor is it one of intrigue. It is, for us at least, one filled with tension and drama. It is the story of how, for the last seven weeks, we have been working to acquire navigational charts. Now, like many great children’s stories, there is a huge lesson to be garnered by the reader, so follow along as I recount this tale.

It all started with our arriving in Georgetown, without the charts necessary to travel further south as we had intended. We were unaware that we were about to become part of what is a bit of a joke here in GT, that is, cruisers coming here, ill prepared, looking for charts. And I don’t accept full responsibility for this, for we, like countless others who have ended up here in a similar situation, have been somehow misled. I can’t say exactly how or where, but Rebecca and I were led to believe that it would be easy to acquire charts from other cruisers here who no longer had any use for them. This, folks, is a lie. Although it might occur in some extremely rare situations, it is not to be counted on!

And so, we worked to formulate a plan to acquire our charts. With Rebecca’s unscheduled trip to Canada, she was able to purchase the paper charts that we needed back in Toronto. Even that required enlisting the help of friends and relatives to shop for us and deliver them to a spot, convenient for Rebecca to pick them up.

Prior to her trip to Canada though, a plan was put into action to acquire the two Garmin chartplotter chips that we needed. A new friend here in GT, who is also from our home town, also had a trip scheduled to go back home. With her encouragement, we contacted our local chandlery, Pride Marine, and asked them if they could order the chips in for us. If I was to email them the exact Garmin part number, I was told that it could be done. And so I did, I thought. My email to Pride stated:

We need two SD cards for our Garmin 546:

That email was copied by Pride and sent exactly as such to Garmin.

As so we waited. Anxiously!

When our friend arrived back here with the envelope, I was relieved. Ecstatic actually. That is, until I opened the package. What I found in the envelope was in fact, not the SD cards that we had been awaiting. It was instead, two Garmin cards, useful only in a few of their older chartplotters, not our new 546.

And so now we have a problem, or rather, several. We are now sitting in the Bahamas with two chips, entirely useless to us, that will somehow need to be returned for us to get our money back. And still, we don’t have the chips we need!

My first step in solving this dilemma was to contact Garmin directly via email, and not wanting to wait for a reply, I phoned them as well. Calling someone from the Bahamas, when you don’t actually have a phone, takes a bit of work. In this case, I resorted to using Skype on a sketchy internet connection.
I first pleaded case with Kelly, a Garmin sales rep. She was understanding, and tried to help minimize the frustration we were experiencing by discounting the unit price for the chips and knocking a bit off the shipping cost for the new ones. Assured that this replacement order would ship out by Fed. Ex. Express, direct to Exuma Markets here in Georgetown, I was appeased, for the moment. Why Exuma Markets? Because we obviously needed a location to have them shipped, and I was assured by the two people I spoke with at that store that they receive packages from Fed. Ex. all the time. Confidence inspiring, right?

That is, until a week goes by without any change in the shipping status on the Fed. Ex. website. And then we receive an email from Pride Marine, saying that Garmin wanted to talk to us (we left Pride’s number as our contact number, because as I said, we don’t have a phone). This does not bode well for us.

Skype call number two to Garmin puts me in touch with Eileen, another customer service rep. who at first, has no idea why I am calling her. With a bit of digging though, she determines that Fed. Ex. has no idea where our package even is! 🙁

What now? She creates a second replacement order (for those keeping track, this is actually order number 3), again promised to arrive promptly by Fed. Ex., their choice of couriers I should point out, not ours. And within a day or two, things start looking up. The tracking number that they gave us for this 3rd shipment actually indicates some progress. The package is in fact moving towards us. We are encouraged by this.

Until… yes, until. As in all good dramas, there has to be some further twists. After all, it was going just too well. Several days ago, during the Georgetown morning radio net, we heard a caller share some distressing news. News about how her package was stuck at the Fed. Ex. facility in Nassau and as their agent had quit, it was not being released. This folks, is not good news! 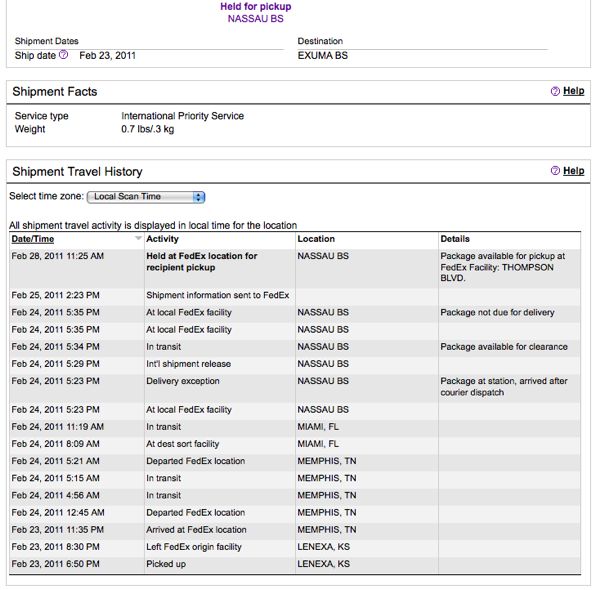 Notice the progress towards Nassau? Yeah! But also notice that it says it is being held for pickup in Nassau! That is not exactly just down the street. Boo!

Speaking directly with Diane from s/v Revel, she shared how she has been waiting for weeks to get her package from Fed. Ex. Further conversations with other cruisers here brought additional tales of similar situations. With Diane’s help, I have gathered that I will need to contact Fed. Ex. by phone and somehow, do the agent’s job and get the package cleared through customs. How, at this moment in time, I’m not entirely sure. It might be as simple as giving them my credit card, or it could be significantly more trouble.

As it stands, here is how this adds up at the moment. We paid a ridiculous amount to have the incorrect chips sent to Canada in the first place (UPS shipping and brokerage fees to send two small chips from the US to Canada came to more that 75 bucks). That money I will likely never see back. I am told that I will be charged a 10% restocking fee by Pride for returning the chips, even though it was Garmin’s fault** for the initial mistaken shipment. We have had to pay to have the replacements shipped to Georgetown and now, will likely have to pay duty which reportedly can be 30-40% of the value.
Are we happy about all this? Of course not. Is anyone going to do anything about it? I doubt it. Garmin? Fed. Ex? Are you listening?

What a soap opera!

Oh, I promised a lesson. Future cruisers following in our footsteps… do not, under any circumstances, leave the US or Canada without ALL charts, paper and electronic, that you require for your planned cruising grounds. They are not easy to come by. Get them ALL before you leave town!

*Thanks to Megan and Chuck for taking the incorrect chips back to the US and shipping them to Garmin. They were received by Garmin on Feb. 24th.

**How do I know that the numbers I sent to Pride weren’t for the incorrect chips? An email from Eileen, the Garmin sales rep, stated “The part number (HUS030R) represents Southeast Caribbean.” In other words, it spells out the data on the chip, not the format.

Pickling instead of picks.

Working on our budget