An intro to Williwaws

While my last post related to sailing in heavy weather, from what I’ve read, in the Patagonia region, strong katabatic winds known as williwaws are a threat to anchored vessels too.

“In the Fuegian Archipelago (or Tierra del Fuego) in South America as well as in Alaska, a wind known as a williwaw is a particular danger to harboring vessels. Williwaws originate in the snow and ice fields of the coastal mountains, and they can feature winds stronger than 120 knots (140 mph; 220 km/h).” Source

These challenging conditions are no doubt at least one reason why it is common to shore tie the boat with several long lines after anchoring in the Chilean Canals. While we have run lines to shore a few times before to limit swinging, a process described quite well by our friends Livia and Carol, we have not had to contend with anything close to the conditions described above. 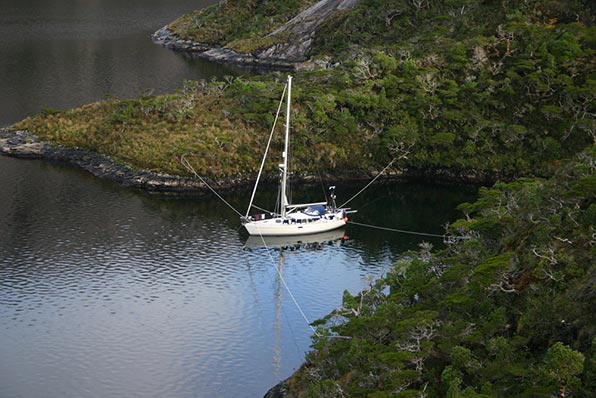 Some boats, like the one linked above, have specially designed reels to pay out the long lines. Others use much less expensive floating polypropylene line flaked into bags that they pay out from the dinghy. Still, others have one or more of these. As with anything new, we’ll have to come up with a system for this.

Perhaps we should have followed the pack!

Playing on the Trampoline

Trading the tropics for mountains