Taking advantage of our time on the dock

When your boat only has one engine and you take it apart, you’re pretty much committed if you want to move it again. We were in that position when we decided to tackle our Perkins engine’s oil leak ourselves. Especially considering that it was carnival time, and NO ONE works during carnival!

As many people commented, both on our blog and on our Facebook Page, the job of replacing the valve cover’s gasket wasn’t super tough or complicated. After draining the oil from the engine (I had planned to change the oil and filter anyway), I removed the valve cover carefully, trying to contain the spillage of the oil left inside. The gasket came off pretty easily and after inspecting it, noted a split in it, and an area which looked to be folded over. Was it like that all along or did the damage occur when I removed it? I don’t know. I had a new gasket on hand so I wasn’t concerned with trying to preserve it. 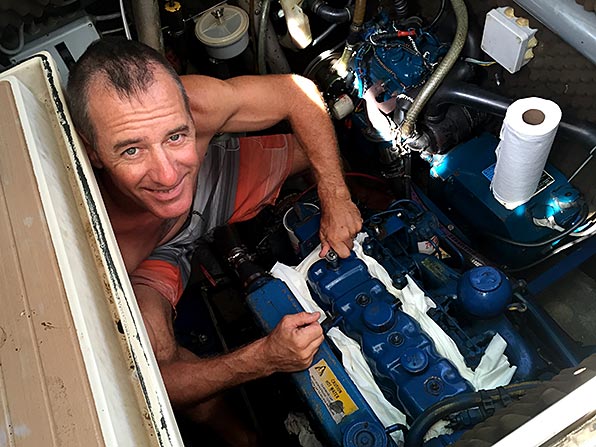 I methodically cleaned the valve cover, and the area that it mates to. Again, I was being careful, this time preventing any bits of old gasket or sealant from getting in where the valves are. Following the instructions I found in a Youtube video, I affixed the new gasket to the valve cover with Permatex and let it set up overnight. 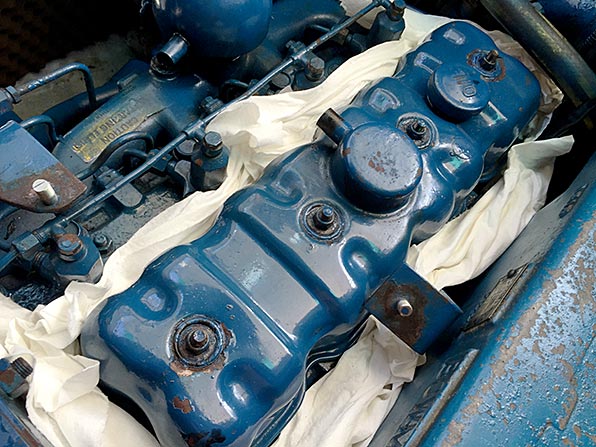 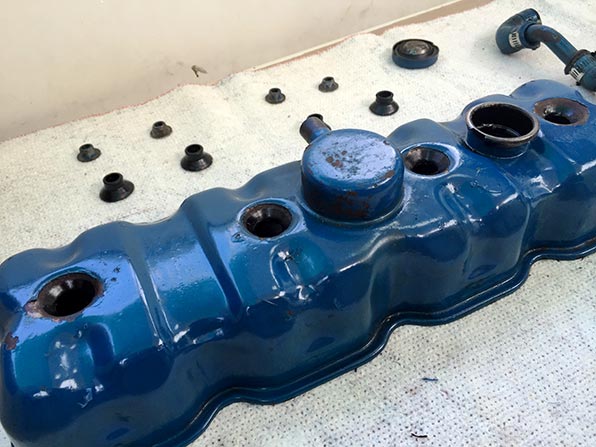 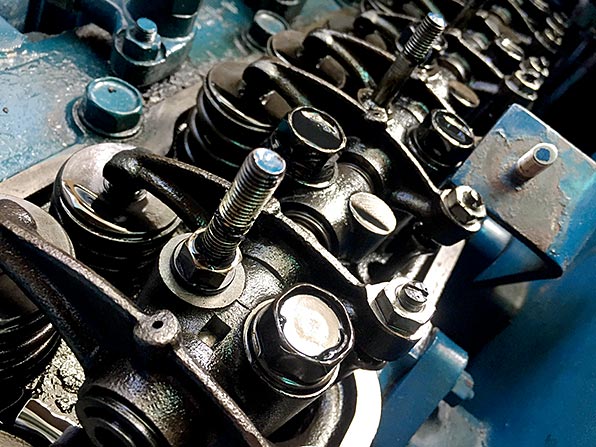 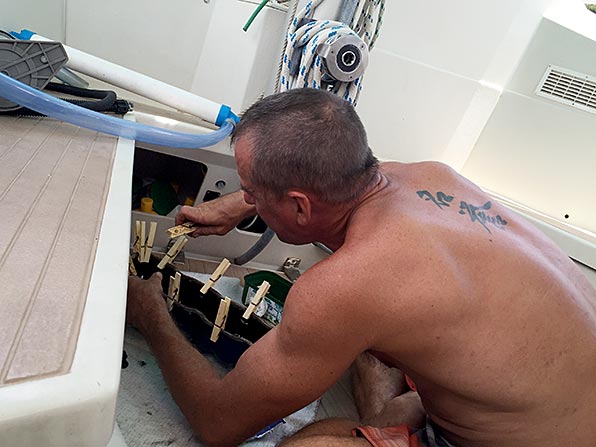 One of the frustrations I had at this time were the conflicting suggestions about adjusting the valve clearances while I had the cover off. I read every source of info I could find on the subject and while many people said that it was easy to do, I still didn’t feel comfortable doing it myself. And as I noted earlier, it was carnival, and no one was around to help. For once, I actually followed my mantra of “if it ain’t broke, don’t screw with it,” and decided to leave the valves alone and reassemble the parts without worrying about it. 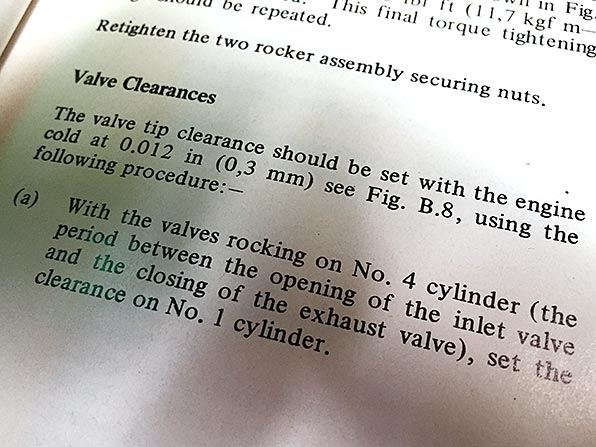 If it ain’t broke, don’t screw with it!

With instructions to not over tighten the valve cover, I gingery snugged it down. Unfortunately, after adding a bit of oil, my leak resumed. I cleaned off the oil and then, a bit at a time, tightened the four bolts holding the valve cover on some more. Eventually, the oil leak stopped. After filling the engine with oil, and changing the filter (not in that order) we ran it to test for leaks. After a couple of hours of operation, it looks like the new gasket might have done the trick.

Happy? Yes, but that was not the only repair we had to make.

Taking advantage of our time on the dock, we disconnected our anchor and dragged all of our chain out onto the dock (we were multi-tasking at this point — the engine was still running). Our intention was to inspect the chain and mark it in some way at suitable intervals. Unfortunately, we thought that when we purchased the boat, the 80m of chain that was advertised was all one length. After we anchored a couple of times though, we noted an especially shiny link at around the 150′ mark. What we suspected and confirmed yesterday was that we in fact had two lengths of 10mm chain connected by a joining link. That did not impress either of us.

Short of buying new chain, which we may very well still do, there’s not much we can do about it. The joining link looks OK but I still tried to add a bit of redundancy to the joint by adding in a length of Amsteel between the links, just in case. Crazy and unnecessary? Likely, but I don’t think it can hurt. 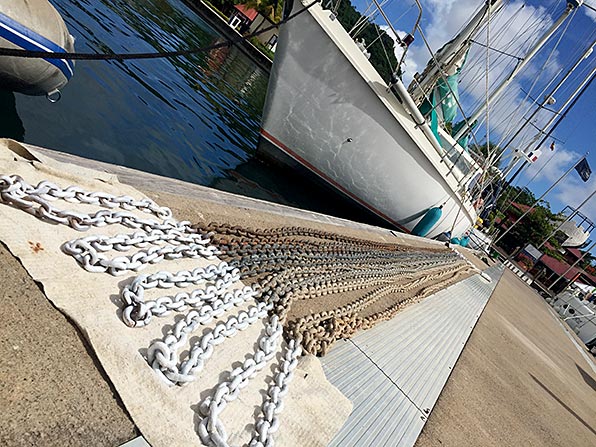 While historically we have marked our chain with colored tie wraps, the store we visited yesterday didn’t have any on hand. They did have spray paint though, so we purchased a can and used it to mark the chain every 25 feet. For the last few weeks we have been trying to convert to using meters instead of feet but we gave up and reverted back to the method that we’re most accustomed to. I know, very un-Canadian of us. When it’s time to drop the hook though, I don’t want to be bothered trying to do extra math to calculate scope.

In addition to the chain job, when I inspected the engine the other day, I noted a chafed raw water hose just after the strainer. While not leaking yet, it was begging to be replaced. As tough as that job turned out to be, I’m extremely happy that we did it while sitting on a calm dock instead of trying to make the repair at sea!

The hose just happened to be connected to fittings in the least accessible locations possible. Additionally, the hose, when cold, was just a bit too small to go overtop of the fittings. Getting the new hose onto those fittings was not pretty. Yes, there was some swearing going on!

The only people I know who voluntarily spend hours in a sauna are fighters trying to cut weight. While not my intention, working beside that hot engine for all that time was surely the equivalent. Even with all the water I drank, I bet I sweated off 5 pounds, or more. Not fun! I managed to get the hose on, secured by opposing double hose clamps at each end, right about five o’clock, just in time for happy hour. Nope, no happy hour for us. Rebecca and I, after the carnival madness, have decided to, at least for a week, take another break from drinking. My liver is very happy with that decision. 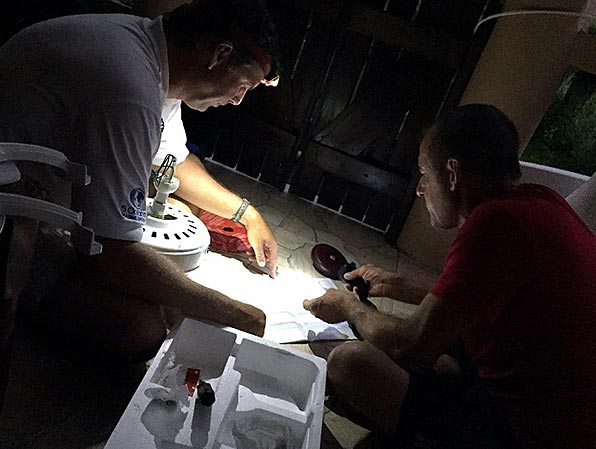 While I would have been happy to just crawl into bed at that point, I had promised our friends Chris and Chrystal that we’d go help them connect their new ceiling fan at their house. As they were just getting ready to leave their office at Port Louis, I collected my tools and we made our way over to meet up with them. Chris has been off island for a bit teaching sailing lessons so we had a fun visit while we worked in the dark to get the thing assembled and wired up. Were we successful? You bet, and while not without its own set of challenges, the job was a lot easier than wrestling with that hose. Man, I hate working with reinforced hoses more than any other boat job!

If you can’t beat em…