A good reason to save.

If you take a good look at the transoms (that’s the rear of the boat) of both cruisers’ dinghies and local pirogues you’ll see that the most common outboard engines powering these vessels are Yamaha 2-strokes, at least down here that is. This is not to say that there aren’t Hondas and Tohatsus and Mercuries around, especially on cruisers’ boats, but the Yamahas seem to be the standard. In addition to the fact these engines are super reliable, when care is taken to avoid running contaminated fuel through them, an additional benefit to using one of these is that parts and service are readily available for them.

Like all engines, these Yamahas have spark plugs which should be replaced on a regular basis as part of a preventative maintenance program. When we first bought our boat, David, ZTC’s previous owner, showed me his collection of used plugs that he had saved after replacing them with shiny new ones. Probably only because he had been doing so, I also started hanging on to the old ones. On two separate occasions now these older plugs, which probably would have just sat unused for eternity in our storage locker, have endeared us to some locals.

Back in St. Vincent we had a young guy in a pirogue mention that he was having some spark plug issues. When I offered him a couple of new ones (new to him, old to us) he returned the gesture by going out and catching us a fresh fish (it was tasty by the way). Yesterday I had another local ask if we had any old plugs lying around as he felt that one of his wasn’t doing its job. When I dug out a replacement for him he also was very grateful. It makes us feel good to be able to help people, and in this case, at really no cost to us. Note that the only reason we are able to share these parts with the local guys though is because they too are running Yamaha 2-stroke engines. 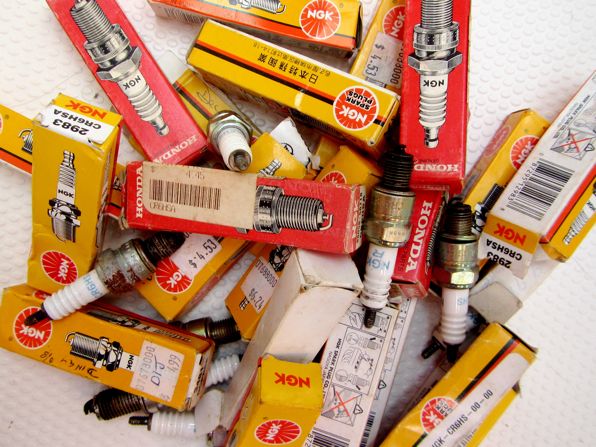 A sampling of used plugs. These are for ZTC’s primary Yamaha 4-stroke engines. We also have a smaller collection for our dinghy’s 2-stroke and also our Honda generator.