Even since we started cruising, and I had the opportunity to check out a number of different boat designs, I have been envious of those with cutter rigs. It always seemed to me that boats with two forestays, that had the option of flying their genoa in light air, or a smaller staysail when the wind piped up, had a big advantage. Even better were the true cutter rigs that allowed you to fly both headsails at the same time!

While by no means an actual cutter, Frost does have a removable inner forestay, and the boat came with 3 different hank-on sails to fly on it. Yesterday, with some relatively light winds in the anchorage, we decided to set one of the smaller jibs to see how it all worked. I was quite pleased with the results. 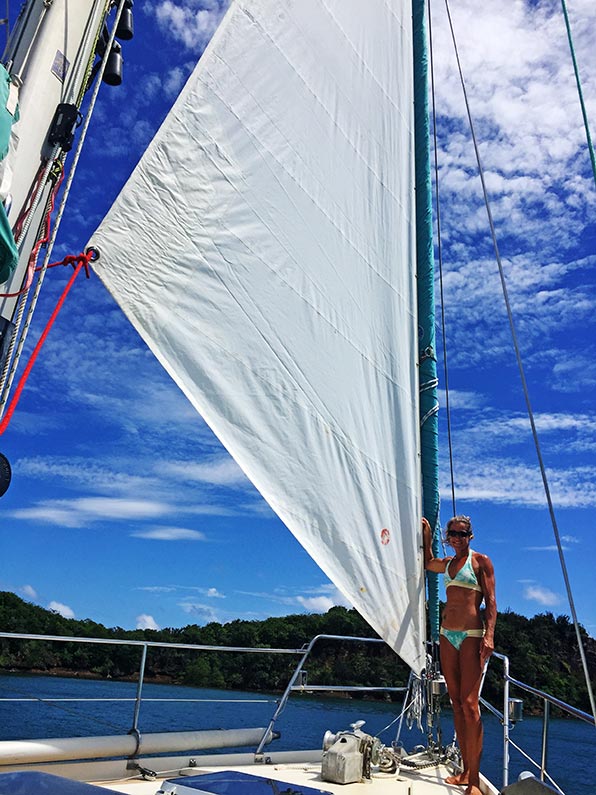 This is the smaller of the two hank-on jibs that we have.
Frost also came with a downwind butterfly sail that hanks on to the removable stay.

One of the questions I had before we started was how to best run the sheets back to the winches. What we did yesterday was remove the genoa sheets from the jib-track, coil them, and then bring them forward. We then moved the car forward on the track and ran the jib sheets through it, leading them inside the shrouds as opposed to the genoa sheets which run outside. Is that the best way to do it? I’m pretty sure it’s not.

Alternatively, we could rig some turning blocks to direct the sheets back to the winches, leaving the genoa sheets in place. Anyone have any thoughts on this, aside from installing an entirely separate jib track, which is not going to happen? 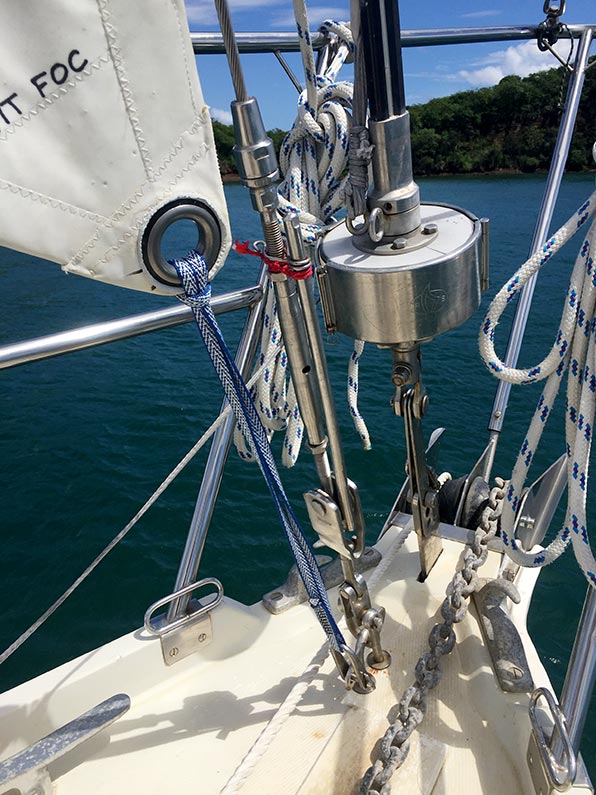 We weren’t sure how to fix the tack either, or rather, at what height. Here we used a climbing sling which allowed the tack to ride up a bit higher than the deck fitting. Ignore the halyard shackle at the bottom. It was the handiest one to grab.

After we bagged the little jib and were re-rigging the genoa sheets, I decided to change up the way that I had the sheets fixed to the clew of the sail. You may recall this post where we discussed this. The large figure eight that I had tied during our moment of drama while en route to Trinidad has been routinely getting hung up on the shrouds when we tack, and we’ve been sailing quite a bit lately to determine this. Rebecca and I discussed our options and decided to go ahead and attach the sheets with a simple Cow Hitch (Lark’s Head). To ensure that the knot doesn’t slip, I lock stitched and whipped the two lines together just down from the clew ring of the sail. Hopefully this knot’s smaller profile will help the sheets slide by the shrouds more easily when we tack. 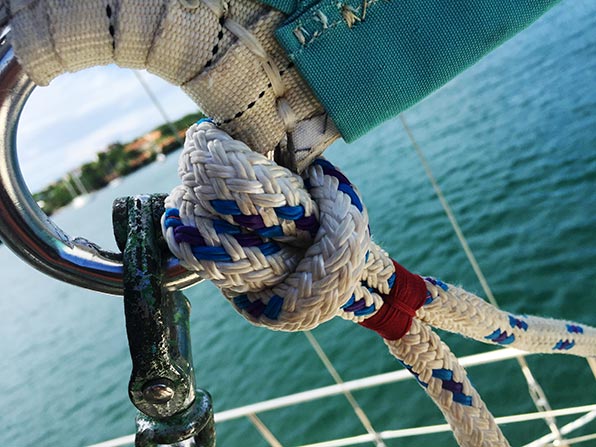 The snap shackle is there to hold the sail fixed while we changed the way the sheets were attached. I wasn’t smart enough to do the whipping before attaching the line to the sail.

How to patch a dinghy leak

Safe and sound in St. Lucia

One week to go!