Does trouble come in threes?

For the third time since we have owned our Amel, we have been challenged by an overheating issue that required us to shut down our engine, and rely upon our sails for propulsion. This would not have been such a significant problem if each time this had occurred, there had been sufficient wind to properly power our heavy boat. Unfortunately, that was not the case.

The other day, while motoring north on the lee side of Grenada, we were rudely surprised by our engine’s loud, overheating buzzer. When the alarm first went off, it actually took both Rebecca and I a few seconds to decipher where the noise was coming from as the handheld radio was right above the alarm, and we initially thought that the sound was coming from it. We quickly located the real source though, and killed the engine to give us time to assess the problem.

After restarting briefly to determine that we still had good exhaust water flow, and that all of the belts were in tact, we waited for the engine to cool so we could further troubleshoot the cooling system. While doing so, we attempted to sail, but were not even moderately successful in making ground back to St. Georges. Several vessels motored past us as we “sailed” along, always at less than 2 knots, and never in the right direction. I’m sure they probably wondered what we were up to. With no real risk to us at the time though, we held off asking for any help, trying instead to deal with the situation ourselves. 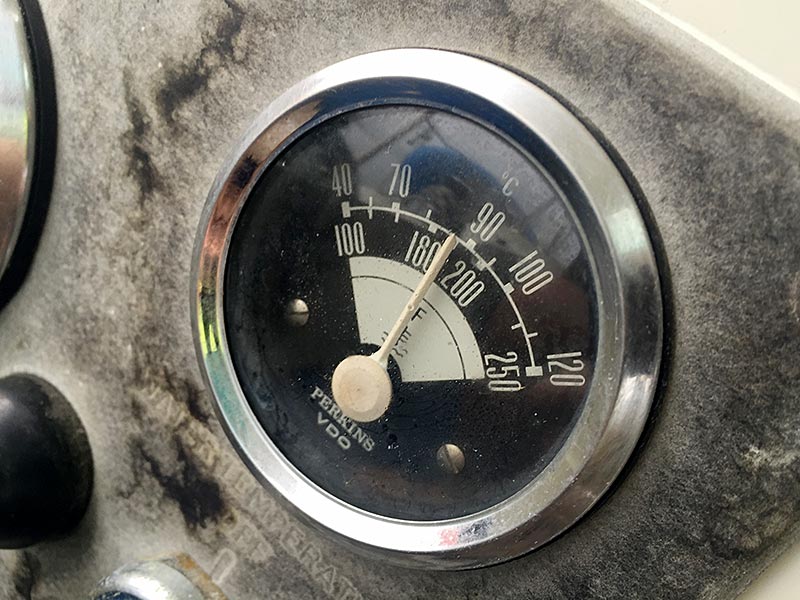 After some time sailing, aka drifting, the engine had cooled enough for me to check the heat exchanger, observing then that we had lost a significant portion of our coolant. So, instead of the raw water pump being the issue, the source of our past drama, it appeared as if our troubles were now on the fresh water side of the Perkins cooling system. While unrelated to our past woes, the result was the same, we were trying to make headway with no wind to propel the boat. It’s a very frustrating experience, to say the least, but I am first and foremost thankful that during none of these times were we on a lee shore, placing the boat at any risk.

Note: We found it much easier to gybe than to tack in the extremely light air.

Once the engine had sufficiently cooled, and it was topped off with coolant, we limped back to Port Louis under power. Shortly after tying up, we were visited by Jason from Palm Tree Marine, who worked to find the source of our problem. It seems now that our most recent overheated-engine experience was caused by a leak in a coolant line running to/from the hot water heater (who needs hot water in Caribbean?), or at least, that is our present assumption. The small hole in the hose, caused by it chafing on a bracket, was extremely hard to spot, and in truth, was only located by a bit of a fluke.

Is it fixed now? The leak is, yes, and maybe the problem. We have been out sailing the past couple of days, and even motored into the wind and seas for a good thirty minutes yesterday. During all that time, the engine’s temperature remained rock solid. Let’s hope that the expression “trouble comes in threes” holds true in this case.

Held captive by the tide

A hit and a miss

Sailing is great but…