I have always been a really fast eater. This, however, was magnified even more when I began working at the martial arts gym that Mike and I were running prior to cruising. We had no lunch hour so to speak. If someone came into the gym while we were eating, we had to deal with them. This prompted us to eat quickly so we would have some fuel in our bodies. 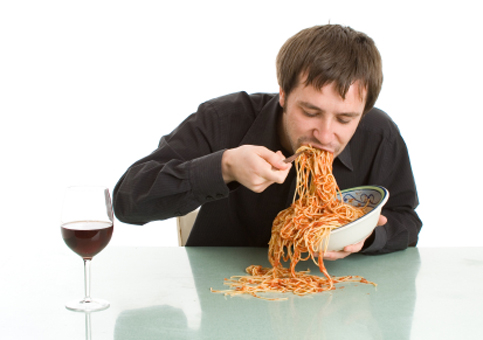 The downside to eating so quickly though is that your body doesn’t have time to realize that it has had enough. I would often feel completely stuffed after a meal having eaten far more than I should have. This motivated me to make more of an effort to slow down my eating habits.

The following are a few tips that have helped me slow down:

1. Use smaller utensils. Using these means less food will go into your mouth at one time. I’ve always preferred using smaller utensils when eating so this was nothing new for me. If you really want to go to the extreme, use chopsticks!
2. Less in your mouth. For foods like a sandwich or burger, take smaller bites. When cutting up food (such as meat), rather than shoveling the whole portion that you have severed off into your mouth, cut that portion in half.
3. Put utensils down between mouthfuls. After taking a mouthful, put your utensils down, chew and swallow that portion before picking your utensils back up. If you are eating something that doesn’t require utensils, put the food down between bites.
4. Chew slower. I don’t think any further explanation is needed.
5. Chew more. I’ve heard that you should chew your food a certain number of times before swallowing. I don’t think this is necessary but do try to make sure that you chew your food well before swallowing.
6. Take sips of water between mouthfuls. Along with putting your utensils down between mouthfuls, try taking sips of water throughout your meal. It doesn’t have to be after EVERY mouthful but sip often.
7. Use a napkin between mouthfuls. Just like taking sips of water, it doesn’t have to be after every bite but taking the time to wipe your mouth will slow you down (also ensures you don’t have food hanging off your face.)
8. Focus on eating, not doing other things. If you eat while watching television or playing on the computer, etc., you may not realize how fast you are eating. Take the time to enjoy your meal away from distractions. I admit that I do eat while doing other things but I have been making a conscious effort to focus on how fast I am eating at that time.
9. Don’t starve yourself. If you go without eating for a long time then you are more likely to want to shovel food into your mouth quickly to satisfy your hunger. Eat small meals throughout the day so you are less hungry at each meal.
10. Sit up straight. Don’t eat as if someone is going to come and take your food. Sit up between mouthfuls. Bring the food up to your mouth, not the other way around. Unless you are eating something very messy, try to remain sitting up straight. Remember, you are using smaller utensils and are taking smaller bites so it should be a little easier to do!

My ‘fitspiration’ extends beyond the blog onto other social media platforms