Morning in a marina

Due to all the prep work we put in during the previous couple of days, we had a relatively drama free departure from Hog Island yesterday morning. I say “relatively” drama free because the engines were acting up a bit, stalling whenever we attempted to slowly shift from idle to higher revs. After playing with them for a bit, we decided to soldier on and raise anchor anyway, hoping (praying?) that running them for a while would solve the issues.

Unlike our sail to Hog Island 6 weeks ago where we bashed into 20 knots headwinds, yesterday’s trip along the southern coast was beautiful with the prevailing winds pushing us along at 6-7 knots on a nice broad reach. To be honest, we could have likely sailed right into the Port Louis channel had we not wanted to run our engines a bit more before getting in amongst a crowd of expensive boats.

Entering into an unknown marina is always an adventure of sorts. Without knowing exactly where you are going, the particulars of the docks and specifically how lines and fenders should be rigged, one can only go slow (docking mantra: Slow is Pro), be ready to improvise and hope for the best. In this particular case, it was even a bit more challenging because we were going to need to dock in a manner that we have yet to try, or in reality, ever even seen someone do. The boats along the dock where we now lie are secured stern to (rear of the boat tied to the fixed dock) with the bow attached to moorings out in front (think med mooring). When we radioed in to the berthing master, we were told to rig fenders along our port side and have lines ready off the end of each hull. As we arrived at the designated spot, we found a marina employee in an inflatable dinghy ready to attach our bow line to one of the moorings while the owners of the boat beside our slip sat nervously watching our approach. Apparently we had accumulated sufficient black box points to allow us to tie up smoothly, and in fact, it looked pretty professional if I do say so myself. I didn’t think it would have been nice to yell out to our new dock neighbors as we were approaching them and tell them that our port engine stalled at least twice during the hairiest moments of the exercise. 🙂

How nice is this marina? Well, to begin, we already have multiple friends staying here and two of them, Bob and Laurie on the Lagoon catamaran Tranquila, even came to greet us as we were docking (or perhaps they were just looking for some entertainment – docking often provides that). The showers are glorious. There is a fresh-water pool to swim in. There are bars and restaurants. There are nearby marine and grocery stores. Yes, it’s no wonder a lot of cruisers spend the entire summer here! For us, a month will no doubt be sufficient as we easily get itchy-feet, looking for new adventures. We do look forward to finding some here in St. George’s though, especially with the approach of Carnival! 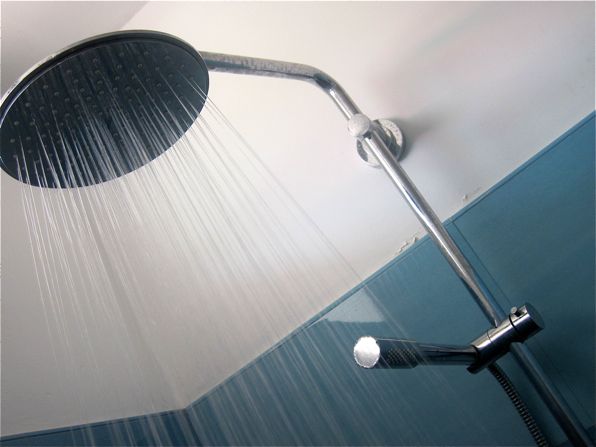 Now THIS is a shower head. Rebecca and I took a long Hollywood shower shortly after we checked in to the marina yesterday. 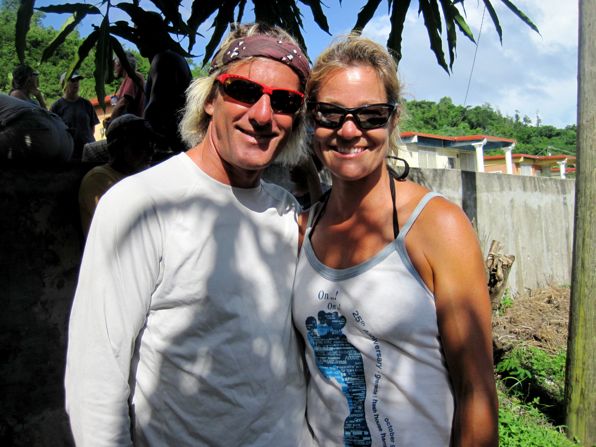 We only had a couple of hours to explore though as we had to catch the bus to the Saturday Hash Run. Here we are in our standard “clean pic,” before the muddy fun begins. As it turned out, we didn’t get all that muddy after all. We did get soaked during the torrential downpour after the hash though. 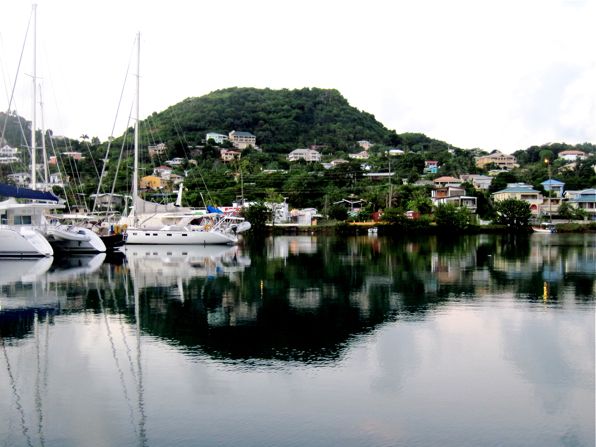 Morning calm in the marina. Nice.

Traveling alone, but together

Back to checking weather