You need to be “handy”

That’s what everyone always says… you need to be handy. The alternative of course is that you have a ton of cash, and can just pick up your Sat. phone and have an expert fly in anytime you have a problem. How much fun would that be though, even if it was a possibility?

Yesterday we made our initial foray into the world of outboard engine maintenance, specifically the winterization procedures for Katana’s two Yamaha 9.9s. Without making excuses, we were a little bit under the gun time wise, and because of this, the whole event was not quite as enjoyable as it could have been. Here is what we did and did not get accomplished:

Changing the gear oil involves removing two screws, one vertically positioned above the other. Once the old oil flows out the bottom we were to inject the new oil into the lower hole until it flowed out the top one. It all sounds good until this little thing called gravity gets in the way. The PO (previous owner) of Katana was nice enough to leave us a partially-filled bottle of the oil. It was in a squeezable bottle so we assumed that we would just place the nozzle in the lower hole and… squeeze. Nope. Mr. Gravity wouldn’t cooperate. It was at this time that I remembered the “mystery hose.” Not only was the PO nice enough to leave us some oil, he also left this cool hose attachment which not only screws onto the oil bottle, it actually screws into the oil hole. Take that gravity! 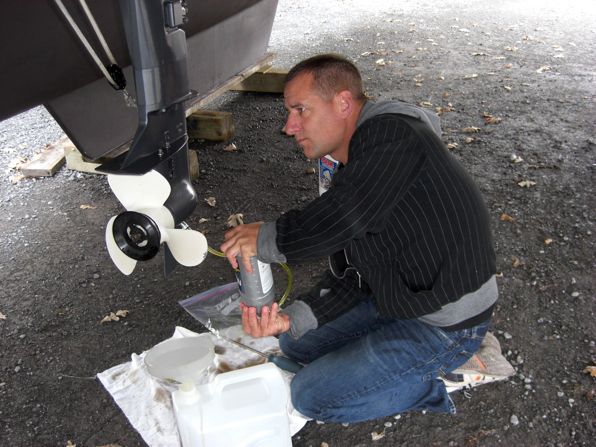 While we in the process of draining the gear oil from engine number one, one of the marina staff, Ian, dropped by to say hello. He saw the oil and commented how clean it was. He made mention of a fact we were aware of, that if the oil appears milky it is a symptom of water in the oil, which can result from a leaky seal.

Guess what? Engine number two… milky-looking oil. Groan. Now how do we fix this seal thing?

When we got Katana there were a lot of spare parts on board. Included among these spares were a whole bunch of spark plugs, in their boxes. I knew some of them were used but had assumed that at least a few were new. And they were… two of them. Unfortunately the two that were new don’t fit into the engines. Hmmm. Plugs are on order… they will be here later today.

I guess I am exaggerating by calling this a problem. This is just lack of knowledge. We were instructed to removed the props, grease the bearings, and store them off the engines. All of this is new to us. It sure would be nice to have someone show us specifically what we should be doing instead of just guessing. But why should we be any different that anyone else? We’ll figure it out. 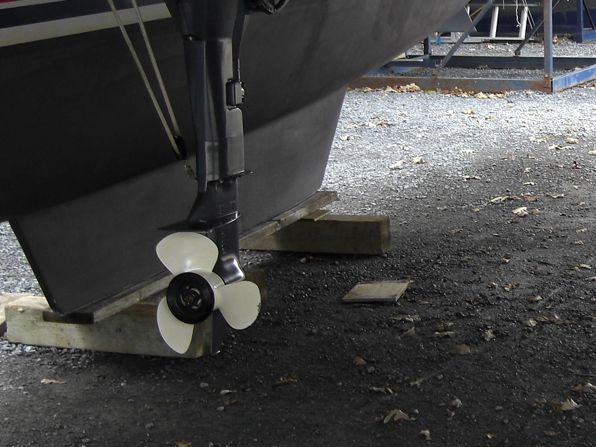 Our family is trying to get rid of us!