You know the day can only get better…

You know the day can only get better when you start it off with poo in your hair!

Warning: If you are thinking about reading this while having your morning coffee and muffin, you might want to think again. Let that first sentence be your guide!

Before I begin, a description of how marine heads (toilets) work might be in order for the non-boaters reading this. All boats in North America that have a marine head installed also have what is called a holding tank. The discharge from the head is pumped into the holding tank and then later, sucked out at a marina at a pump-out station. Boats are also typically fitted with a Y-valve which would, instead of pumping out at a marina, allow the contents of the holding tank to be pumped out overboard. Now, for obvious reasons, doing this within the local waters of the US and Canada is illegal. Boats are only permitted to pump overboard when they are greater than 3 miles offshore.

But what about outside the US? The truth is there are no pump out stations in the Bahamas or the Caribbean, or virtually none. Boaters thus have one of two choices: pump into a holding tank and then later pump it overboard or have the head discharge directly overboard, bypassing the holding tank altogether (our boat is not plumbed like this). Grossed out yet? If you’re going to be a boater, you’d better get used to it. We have (sorta).

So how did I end up with poo in my hair? Here is the detailed and dirty story. Once again, remember, I warned you!

It all started with our holding tank overflowing. How did I know it was overflowing? Because when I looked in our bow locker yesterday morning, there was brownish “water” on top of the tank, apparently having leaked out around the top plate that I must not have sealed well enough. This meant that it needed to be pumped out.

***If it makes you feel better, you can imagine that we upped anchor and sailed 3 miles offshore before tending to this.

The problem is, we didn’t seem to be able to pump anything out. Nada. We were confident that it was not working because with waters as clear as we were in, we should have been able to see the discharge, at least briefly before it dispersed in the vast ocean. Part of the issue, and what we would later learn was a very significant part, is that we weren’t really sure which position the handle should be on the overboard discharge seacock. A seacock is essentially a valve which, via a lever, opens and closes the hole that goes overboard. In this case, the seacock is below the water line. I was pretty certain that having the handle all the way to starboard was closed. What I didn’t know is whether having it straight up was open or if it needed to be moved all the way to port to open the hole. So, we tried both, attempting to pump overboard with it in both positions.

Note: This seacock, and all the parts associated with this project, are in our starboard bow locker. To make this more descriptive, imagine being locked in a tiny, watertight closet with an over-full toilet. Descriptive enough?

So, having tried pumping it in both positions and having no success, we started trouble shooting at what I felt was the easiest of parts: the vent hose. I hypothesized that if the vent hose was plugged, perhaps it wouldn’t be able to pump properly, so I removed that hose and once again, attempted to pump it, switching the main seacock from side to side. Again, Nada.

At this point I thought that maybe one of us (Rebecca!) should don fins and mask and get under the boat to poke something up into the thru-hull and see if it was plugged. Being the trooper that she is, she put on her wetsuit without a complaint and got out there with a coat hanger and a long screwdriver to determine first, which position of the lever really did open the seacock and secondly, that it wasn’t plugged at the output. She also stayed nearby (but not too nearby) while I tried to pump the head discharge and she confirmed, nothing was coming out. 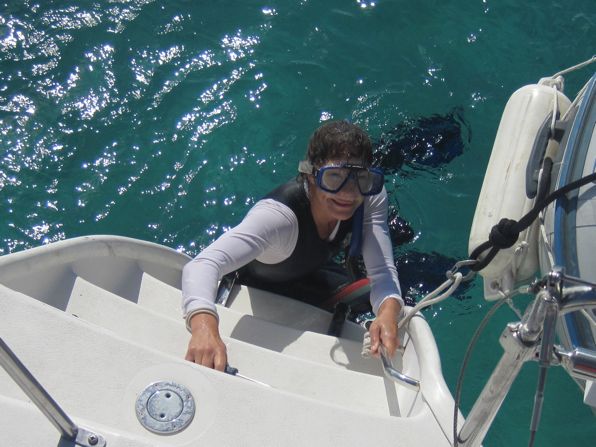 The water is chilly!

Now we’re getting to the really bad parts of the troubleshooting!

The next possible problem was that the pump wasn’t working or that there was a blockage between the holding tank and the pump. The only way to confirm if either of these were true was to remove the hose on the output side of the pump. First removing the clamps and then subsequently, heating up the hose with Rebecca’s hairdryer (this is what I need to do each time I remove or install one of these stiff hoses), I pulled it off without spilling more than a drop of “stuff.” So now I had to test the pump. I placed a bucket underneath the output to catch any discharge that might come out but…

I barely touched the pump handle when poo shot out the fitting. Visualize explosive diarrhea. Now remember that I am locked in this small watertight closet while all this is going on AT HEAD LEVEL!!! I don’t know if my writing is even doing this justice but this is absolutely the worst job I have ever had to do on this boat. And it’s not done yet. Not even close!

I have now, in an extremely gross but effective fashion, determined that the pump works and there is no blockage between it and the holding tank. This brings us to the worst possible problem, the blockage is between the pump and the seacock. I say this is the worst because to check this, I need to remove the hose from the seacock. This scares me because being below the waterline, if I take the hose off and something goes wrong with that seacock, water is going to start flooding into the boat. As much as I don’t want to face that, this problem needs to be solved. So, with wooden bung right beside me to plug the hole, along with my container of Stay-Afloat, I feel well enough armed to attempt the removal of the hose. Clamps were removed, hair dryer was engaged and hose was removed. Yes, some more poo was spilled in my little closet. And yes, the top of the seacock looks to be blocked COMPLETELY with poo! But is it the hose, or the seacock?

To rule out the hose, I wrestled the end of it overboard and cycled the pump handle a couple of times. As should happen, the contents of the holding tank began flying out of the hose and into the water beside our boat. This conclusively tells us that yes, it is the seacock that is blocked and causing us the problems.

With screwdriver in hand, I proceeded to hang upside down in my poo-smelling closet and scraped the blockage out. I also opened the seacock, allowing first a bit and then later, a lot of water to flow into the boat, flushing the seacock clean.

It should all be fixed now, right? I just need to put it all back together, reattaching the hose that I removed from the seacock. I had a bad feeling about this and rightly so. When I brought the end of the hose back into the locker, the remaining contents from the last pumping attempt poured out into the locker. Groan!

I was just getting way too comfortable with the whole cleaning-up-poo thing by this point. The mess was removed and the hose reattached. The final test was to check the overboard discharge and I am happy (ecstatic!) to report that it finally worked.

Follow up: The cause of this whole flying-poo fiasco is our trying to pump the head overboard with the seacock in the closed position. With nowhere for the contents of the tank to go while doing so, it just compressed into the seacock. We won’t be making that mistake again, that is guaranteed!

So what does one do to make the day better after starting it off like this? With the weather finally having eased, we took the dinghy ashore and went for a LONG hike! 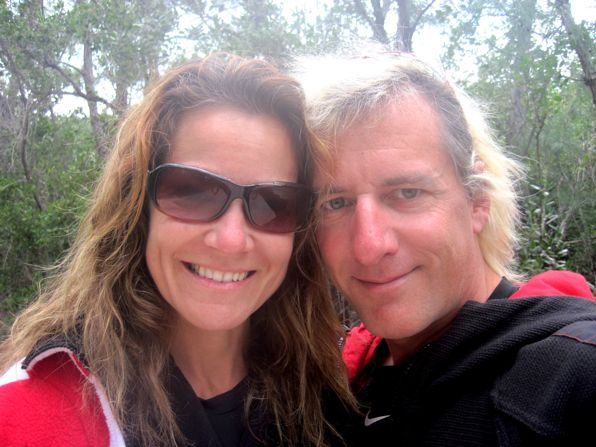 We’re both wearing multiple sweaters and jackets as it is still pretty chilly when the sun isn’t out. I know, we’ll get no sympathy from those back in Canada and the US. 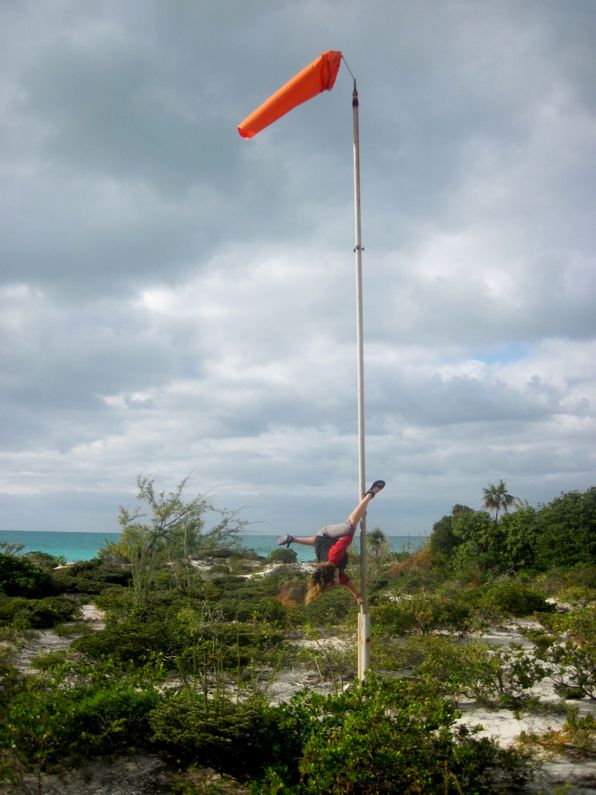 A pole like this just begs to have Rebecca do a trick on it. 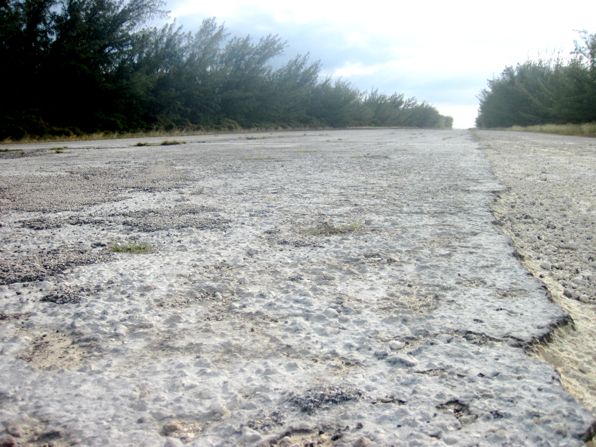 The runway which goes with the windsock/dance pole above. 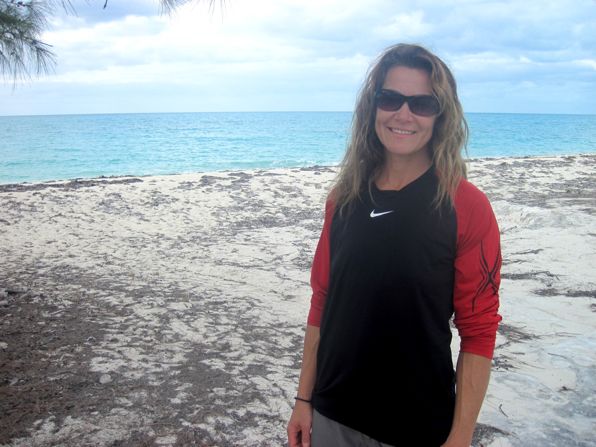 The west coast of Norman’s Cay. 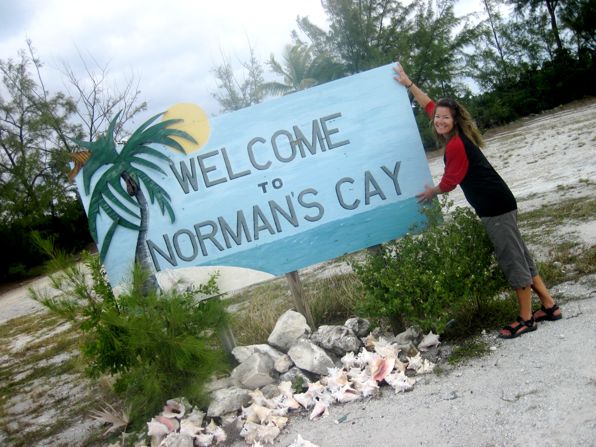 We’re near the southern end of the island now, quite a distance from where we are anchored. 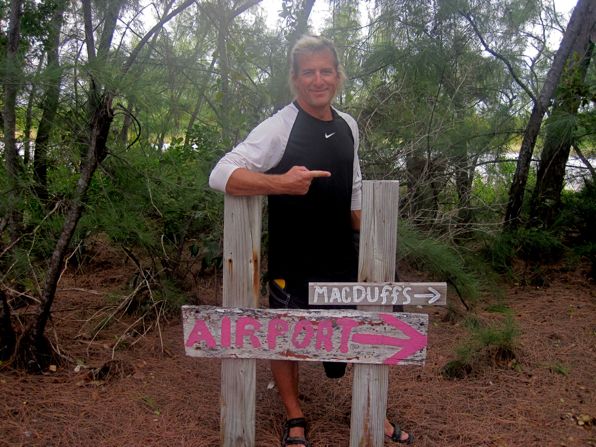 The “famous” MacDuffs. Cool ambiance but very pricey! One beer = 6 bucks. Hamburger = 18 bucks! I’ve heard the burgers are awesome but at that price, we’ll never know for sure.
We settled for one beer each. 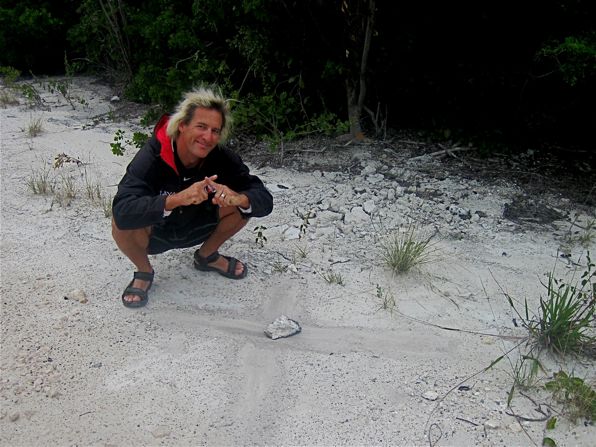 We had bushwhacked our way through the brush to get from the beach to the road. So that we could find our way back to our boat, we were smart enough to mark the side of the road where we exited. 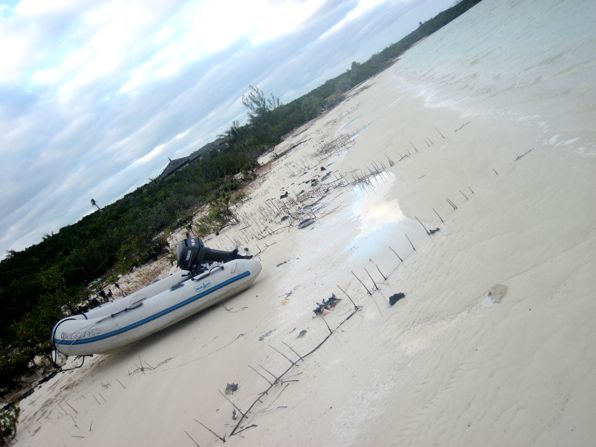 The tide was going out. We did not drag our dinghy that far up onto the beach!

Time for a makeover?