Yet another thing I need to have tattooed on myself.

Just the other day Rebecca and I re-watched the movie Memento. For those not familiar with the film, it revolves around a man who, due to a brain injury, can no longer create new memories. In fact, if he talks to you long enough, he won’t even remember who you are. So, to combat this, he writes himself notes, lots of notes, and takes Polaroid photos. For the really important stuff though, the things he must remember, he has them tattooed on his body. Perhaps that is a system that might serve me well too, at least for the important things. For example, how would this look as a tattoo?

Beware the last bit of torque… it’ll bite you in the @ss!

It’s true, I bet more projects have been wrecked by the application of just a bit more torque than by any other single cause. I have personally witnessed 3 situations where projects have gone south for this reason in as many days. Two of them involved a makeshift repair job on our friend George’s outboard engine. The third occurred just yesterday here on ZTC.

In my quest to make sense of my battery conundrum, I took the time to clean off all of the battery terminals to make sure they were making excellent contact. Because half of our batteries live in the outboard engine wells, from time to time they are exposed to a bit of salt spray. The process of cleaning them off went fine but when I attempted to do the same job on the circuit breaker which resides between our port engine and the batteries, the torque thing bit me in the… you get the idea.

Anyone know of a good tattoo artist in Grenada? 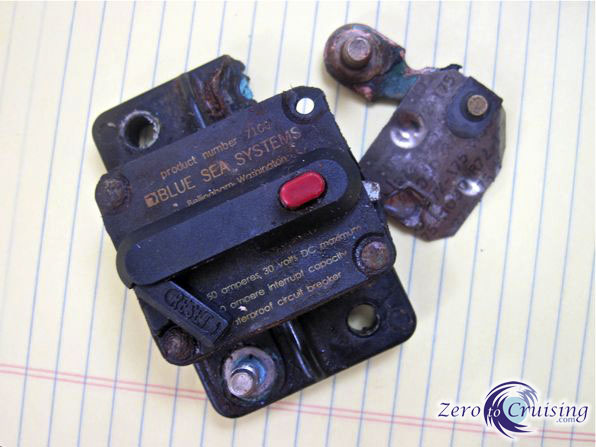 A mistake that could cost you a thousand bucks, or more!

We’re going to be rich!