Worst lightning storm ever? For us, at least!

One of the vivid memories that I have from childhood is sitting on our front porch during electrical storms. Blissfully unaware of the dangers of lightning (and seemingly my parents must have been so as well, as they allowed me to do it), I sat out of the rain, nice and dry, enjoying both the light show, and the smell that accompanied it. Now, more educated about the perils of lightning, and living in a home with a big metal pole sticking out of it, I am no longer enamored by Mother Nature’s fireworks display. On the contrary, I am most decidedly not a fan, and do my best to avoid it. 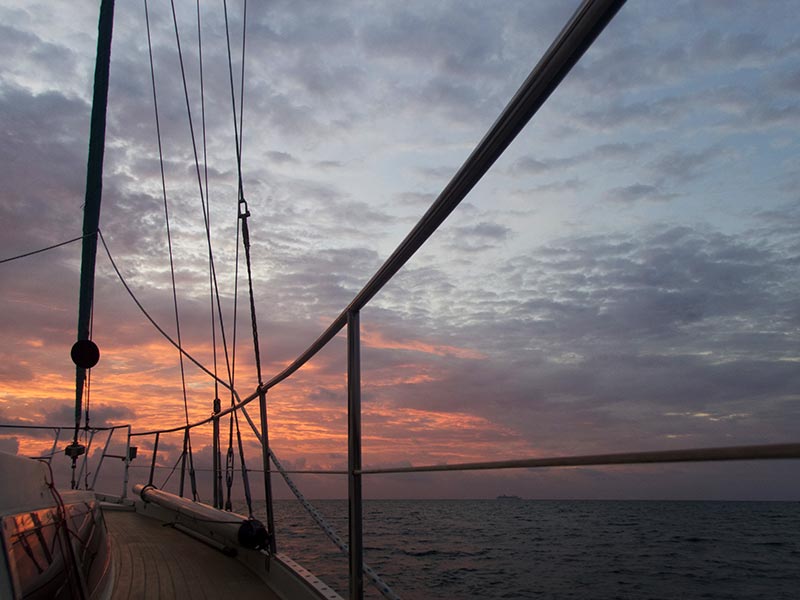 Before Rebecca and I decided to sail to Carriacou yesterday, we, of course, checked the weather. When I say that though, what I mean is that we checked to see that the wind and sea state would be good for the trip. Unfortunately, that’s the extent of the weather checking that we did. I seldom check the forecast for precipitation because it pretty much always says the same thing down here: partly cloudy with a chance of showers. Rain doesn’t bother us, and a forecast calling for it wouldn’t have stopped us from making the trip. And in retrospect, even if we had noted that the forecast called for thunderstorms, it’s still likely that we wouldn’t have been put off. After yesterday’s passage though, we may, in the future, react differently! 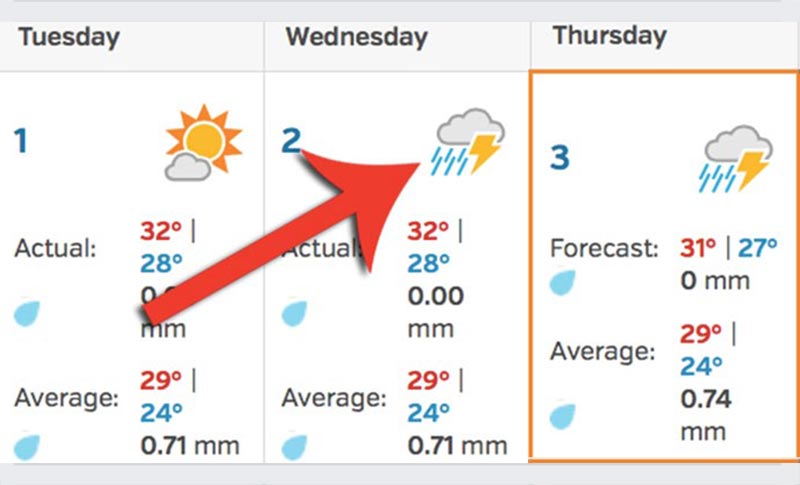 Start of the day: Salvage!

We first left the harbor at 6:30 AM, shortly after the sun had made its initial appearance. I say first because, 15 minutes later, after just clearing the Hog Island entrance channel, we came across an unattended dinghy, floating towards the reef. Knowing how much of a problem losing a dinghy could be, I pulled up alongside it, allowing Rebecca to secure it with a line, and then with it under tow, we returned to Mt. Hartman Bay. On our way back, we radioed our friends on Brilliant, and in typical cruiser fashion, they dropped their tender in the water to meet us part way back to take over the salvage operation. Once free of our new charge, we repeated our exit path, setting sail east towards the windward side of the island.

The day started off so nice!

As I noted, we had checked the wind forecast, and as expected, it was blowing briskly out of the south east. The wind was so far south that we were actually able to sail east, reaching parallel to the coastline. This almost never happens, and so for an hour or so, we reveled in the perfect sailing conditions, and shared images online using my iPhone so that others could see how good it was too. As we neared the end of the island, ready to start heading up the windward side, things began to change.

The sky was dark and ominous over St. David’s, and we prudently reefed our genoa, anticipating a building wind. The overcast sky was intermittently illuminated by flashes of lighting, and the thunder that accompanied the flashes rumbled loudly, several miles off, over the shore. About this time the crew on Alley Cat, a catamaran that we had noted was following our path, radioed us to ask where we were heading. After confirming that we were both heading towards Carriacou, we bid each other well, and loosely said that we would touch base when we had both arrived. Little did we know, at that point, that we were not going to make it there. 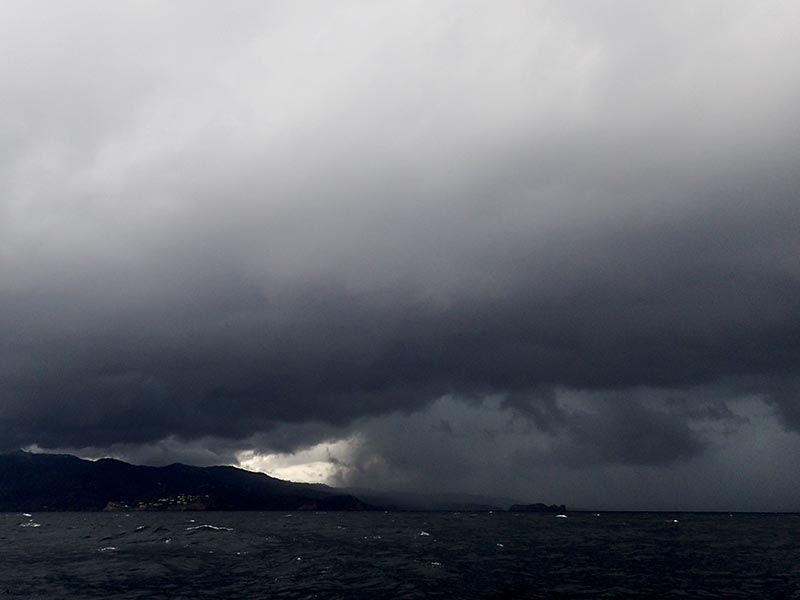 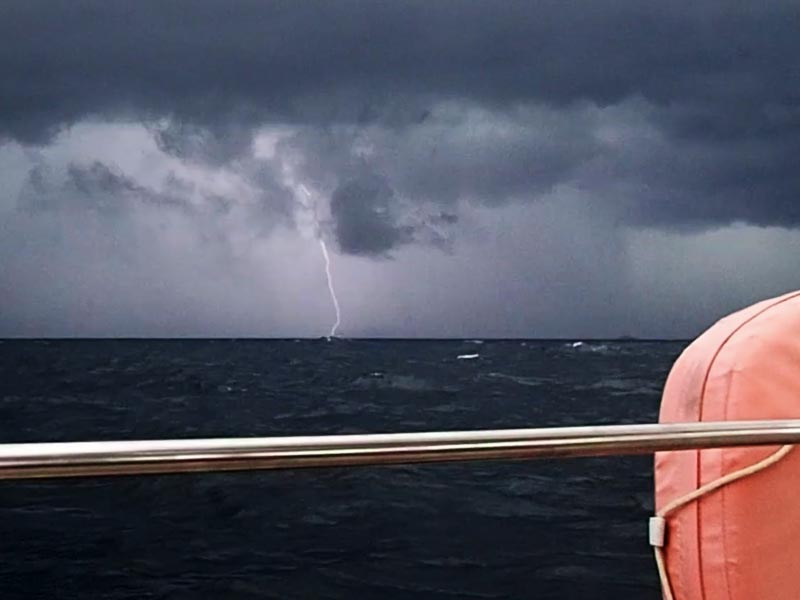 We’re pretty used to seeing squalls out on the water. Typically, with the trade winds blowing from the east, their direction of movement is pretty easy to predict. We, and our sailing companions, both altered our course a bit more to the east, trying to move around the outer edge of the clouds. Around this time though, we experienced a 180˚ wind shift, and a noticeable drop in air temperature. Seconds later came the rain.

And then things got worse!

Having started our engine and furled the genoa, we motor sailed north. The visibility dropped significantly by this point, and it wasn’t long before Alley Cat’s position was lost to us. Surprisingly, the storm which we had anticipated would continue moving east, away from us, stayed put. If anything, it grew in size, leaving us with lightning flashing both to port and starboard.

We learned today that the storm never did make it to the east side of the island. It stalled over Grenville, and then later Sauteurs, causing significant flooding. 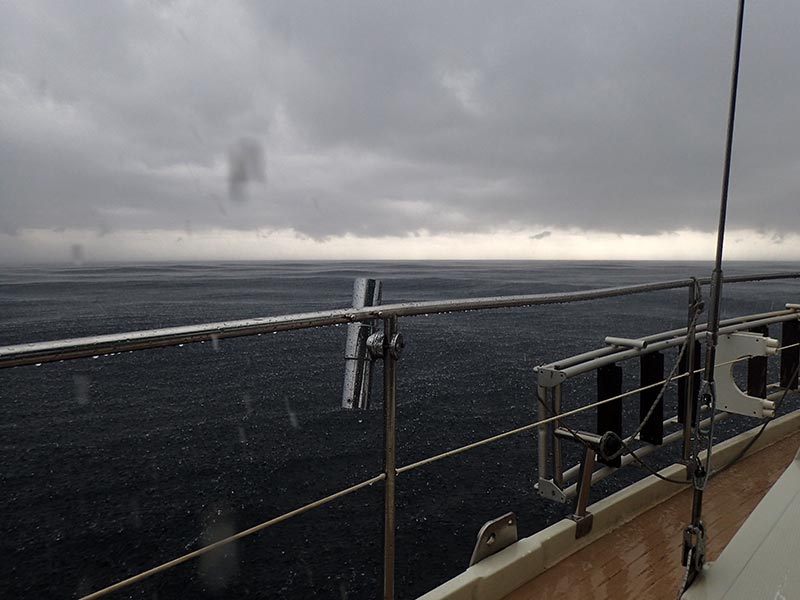 Very little wind and a ton of rain. Eerie!

Being that we were on the windward side of the island, there were no bail out points for us, and so we had little choice but to keep going. Unfortunately, each time we thought that we’d outrun the worst of the storm, it would overtake us again. By the time we reached the top of Grenada, we could no longer see the island through the rain and clouds, and the lightning was striking the water all around us!

All this time I had been sharing images and status updates online, using my iPhone’s cellular connection. My last post, at 9:49 AM, stated that we were in the “worst lightning storm we’ve seen in years.” Unfortunately, until this morning, that was the last update that we were able to make.

In addition to clocking full circle, the wind had also built by then, with gusts well over 30 knots true. Still overpowered, I went forward to reduce sail even more. With my mind on other things, when I went up on deck, I neglected to take my iPhone out of my pocket, and my new rain jacket did nothing to keep the phone dry as I struggled with the sail.

A change of plans!

By this point, both Rebecca and I were wet, cold, and I don’t mind admitting, scared. Lightning was striking the water all around our boat, causing us both to jump at the deafening sound of the thunder. I shivered at the helm, wondering if it was due to the cold, or fright. Having just about had it by then, and with no end to the storm in sight, we decided to alter course to Ronde Island rather than continuing on to Carriacou.

Because we had told Alley Cat that we’d be going to Tyrell Bay, we tried to hail them on the VHF radio to let them know about our change in plans. While we could each hear them faintly, we were never able to make solid contact, and thus were unsure of whether or not they could make out our intentions. We learned only this morning that they could, in fact, hear our transmission, even though we could barely make them out.

By the time that we reached Corn Store Bay, the anchorage at Ronde Island, we had moved out of reach of the lion’s share of the electrical storm. The rain continued throughout the night though. In spite of being boat bound due to the inclement weather, we enjoyed a pleasant night at anchor, both of us tired from the day’s trials. The only downside is that, with no internet access on the island, and an iPhone on strike from its undesired shower, we had no way to follow up on my last, slightly ominous, Facebook update.

Although dark clouds still surrounded our anchorage, we awoke this morning without rain. Eager to get to civilization so that we could update our friends and family as to our whereabouts, we set sail just before 7:00 AM. The remainder of our trip to Carriacou was uneventful, and while we caught no fish during the passage, we didn’t get rained on either. 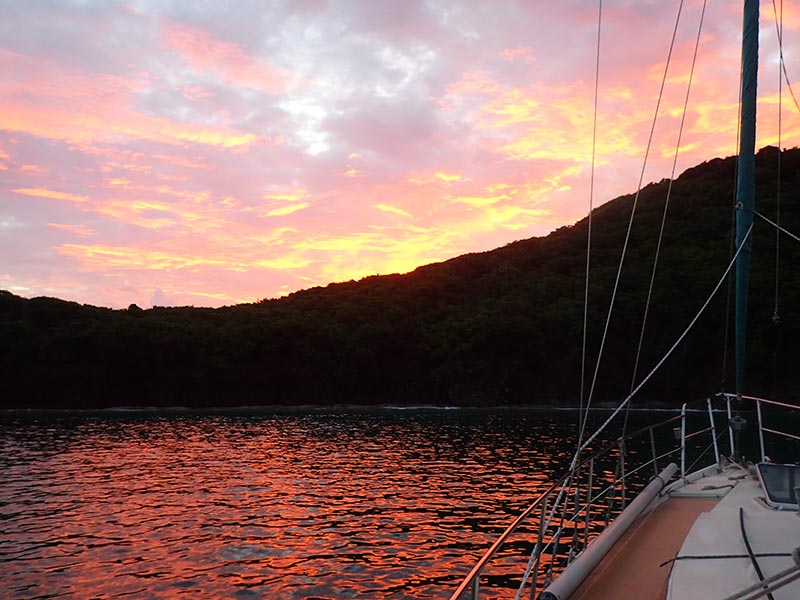 After arriving in Tyrell Bay, we located a nice patch of sand in which to drop our anchor. Rebecca went up on deck to workout (you know how she gets when she doesn’t get to exercise, and yesterday’s workout was a no-go), and I logged on to the internet. What I found were numerous comments, and private messages, wondering where we were, and our status. We even received a report from a friend that our whereabouts was a topic of discussion during the first 5 minutes of the Grenada radio net. Oops. Sorry, guys. It’s nice to know that people are concerned about our welfare. Maybe I shouldn’t post so many updates!

On our own once again