When the wind does something unexpected

When you hike to the top of a volcano that, in 1902, killed 30,000 people, and yet the dinghy ride home from the trek offers more drama than the climb itself, you know something is amiss. So it was yesterday when we made our way back to Frost shortly after dark.

When we set off for our hike early yesterday morning, the sky was grey, and rain threatened. Outside of that though, everything was as it should be. During the period that we were off the boat, things would change, considerably.

Windguru, one of our sources for weather info, had indicated that we’d get a bit of wind from the south, and maybe even south west. For that reason, as we rounded the point by Club Med, heading back towards the St. Anne anchorage where we had left our boat, and we started bashing into waves, I wasn’t super surprised. It was unusual, as the waves would normally be behind us, but the forecasted wind shift might cause that.

Not all anchorages are equal!

To give you some background, St. Anne, like many of the anchorages in the Eastern Caribbean, is an open roadstead. Its protection comes as a result of the landmass blocking the easterly trade winds, in this case, Martinique. Yes, 99.9% of the time, the wind here blows from the east. Sure, sometimes the wind is a little south-east, and at other times north-east, but still, the wind comes from the east. There is, however, that 0.1% of the time that the wind decides to do something crazy, like blow from the west. Certain harbors can deal with that rarity without much of a problem. Anchorages like St. Anne are not among them!

Check out this post where I describe the 4 main types of anchorages. Note specifically the part of the post where I talk about “Anchoring anywhere on the lee side of an island.”

Fortunately, we made it back to the boat before things got really crazy. Even so, getting our dinghy secured onto the davits while the boat was pitching up and down was less than fun. The rain started in earnest just as we arrived, and driven by the strong winds, it was coming at us sideways. Lightning regularly lit up the sky, although the lack of thunder leads me to believe that it was still quite distant. And that’s good, especially for the catamarans! 🙂

Speaking of wind, for the entire evening, the wind stayed above 25 knots, gusting at times to close to 40 (we recorded 37.6 on our wind instrument). Remember the west wind thing I was talking about? Well, that put everyone on a lee shore, and because of the increased fetch, it generated significant waves, causing every boat in the anchorage to pitch violently up and down.

Not much sleep on Frost

As you can imagine, all these factors combined into a not-so-enjoyable evening. Many boats dragged anchor, or swung in unexpected directions, and the radio came alive with boats calling one another to sort out that mess. Fortunately for us, we were anchored at the back of the pack, with plenty of room around us (by design, not by accident). Because of that, we were in no danger ourselves. Our well-set 85 pound anchor from Mantus kept us secure. Even so, we had our engine running for some time, just in case, and we kept an intermittent watch from the cockpit, with raincoats on to keep us dry and warm.

Shortly after midnight, the wind left us. While that lessened the drama of boats dragging, it created other issues. Instead of remaining lined up to the waves, the lack of wind allowed the boats to then swing around randomly, often ending up beam to the waves. So, instead of pitching up and down, that is a movement fore and aft, they started to roll, side to side. Or at least we did. And because the waves generated by the strong winds were still quite large (they take a while to abate), that roll was significant. Significant as in, you’d better hold on when moving around the boat, and have everything stowed securely! 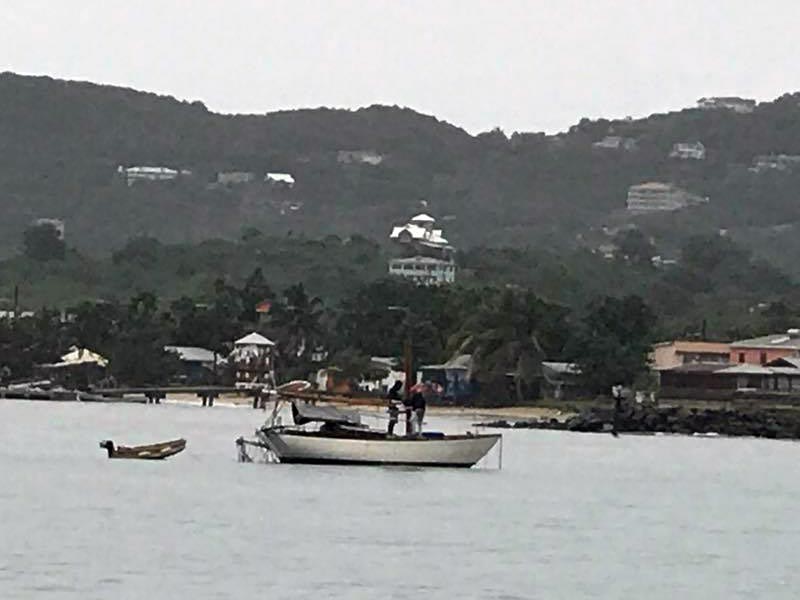 Boat dismasted during last night’s drama in Rodney Bay, St. Lucia.
This image, and the cover photo of the boat on the beach, were taken by our friend, Jamie Still.

Needless to say, there wasn’t a whole lot of sleep happening last night. Not on Frost, nor, I assume, on any of the other boats here. What has today brought us? At this point in time, we have little wind, light rain, and are still rolling uncomfortably. Daylight did allow us to survey the damage, and as you can see from our friend Jamie’s photos, taken in Rodney Bay, St. Lucia, the island just south of us, the damage in some spots was significant.

Radar seems to indicate that we’ll be getting some more moisture today, and WindyTV shows a bit more wind from the SW. I have also heard that there are more squalls in the forecast. All told, I think this will be a stay-on-the-boat kind of day for most people in this area. It will be for us, that’s for sure.

So long Antigua. We’ll miss you.