For a change yesterday came together pretty much as we had planned. At 9:00 sharp I picked up Herman, the electrician that our friends Keith and Jaime had recommended, and took him to the boat. After explaining the symptoms that our inverter/charger was displaying, he set about swapping the old one for the replacement. In less than an hour he had the new unit up and running and I’m happy to say that it works. Not only does the inverter once again function but the charger, which I had my doubts about too, is putting out more juice. Score!

We dropped Herman back off at the dock at around 10 after 10:00 giving us just under an hour to return the non-functioning inverter to Budget Marine before we had to return the car that we had rented the day previous. We definitely got our money’s worth out of that car. We picked it up at 10:59 AM and ended up returning it at 10:55. Perhaps we should have driven around the parking lot a couple of times just to make it an even 24 hours?

After returning to the boat, we raised anchor and motored the short distance over to Druif Bay, the same bay where they do the flyboarding. The water is cleaner there than it is in Long Bay and we wanted to run our watermaker to fill up our tanks. That watermaker rocks by the way! We also planned to head to shore to do a bit more provisioning recon at a different grocery store. That ended up being a productive trip too. 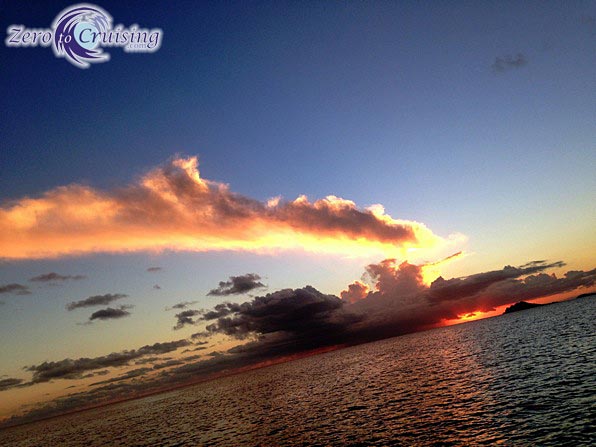 We get to see awesome sunsets from Druif Bay too!

The remainder of our day, until well after 5:00 PM, was spent organizing the items that we purchased for the charter. Some may find this interesting but I suspect that about 70% of the money we spent provisioning was not on food but on beverages, both alcoholic and non-alcoholic. I have not done an actual calculation yet but it will be easy enough to do once we tally our receipts. Storing these items in spots where they are safe and accessible during the charter took some planning. Rebecca dealt with most of the food so the truth is I really have no idea where 90% of those items ended up. We had better not lose her or we’ll all go hungry! 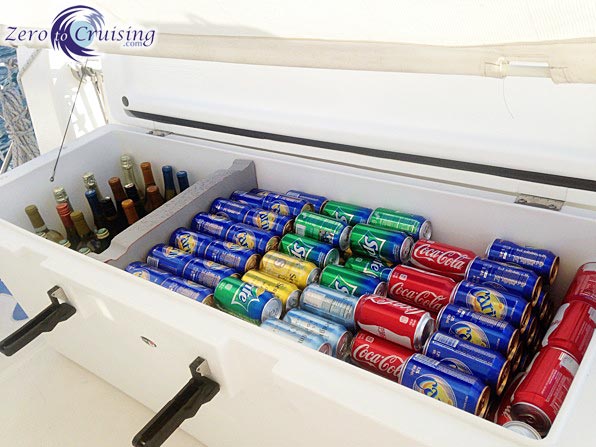 Would you believe there are 7 cases of beer, 2 cases of coke, at least 2 cases of tonic, a case of club soda and some misc sprite in there? Oh, and 12 bottles of Chardonnay and three bottles of Bubbly.

What’s on for today? Rest.

Ha! Just kidding. We need to clean the boat. Tomorrow morning we’ll be shopping for all of the fresh produce that we’ll need and then moving the boat around to Christmas Cove at the east end of St. Thomas to stage for our Tuesday mid-afternoon pickup at Red Hook. Then the fun will begin!