When you’re unable to screw

Within the hour we’ll be taking the ferry from Peter Island to Tortola to meet up with the surveyor that our friend Michael has hired, Geoff Williams. Geoff is scheduled to do a pre-survey inspection this morning and we plan to be present for this as Michael will not be. I’m not sure what goes on at a pre-survey inspection but it should be an interesting outing.

Because I don’t have a lot of time to write this morning, I’ll leave you with a quickie suggestion/tip. First, as most boaters know, you can’t have enough tools. There are some that you will use almost daily and others that will sit in a locker, just waiting for that special occasion where they get the opportunity to see the light of day and be put into use. For us, one tool in that latter category is our tap and die set. Before we owned a boat I had never used such a tool. Now that we do own one, I think I have used pieces of our set maybe three times. One of those three times was yesterday when, after screwing up the threads on a machine screw, I used an appropriately-sized tap and die to repair the damage. If I didn’t have that tool set on board, I would have been screwed, or actually, unable to screw (it’s early, I couldn’t resist 😉 ).

No one likes to spend a bunch of money on tools that they won’t use all that often and I didn’t. Any Canadians reading this should check out Canadian Tire as they frequently put sets like we have on sale for 70% off. That’s when we purchased ours. 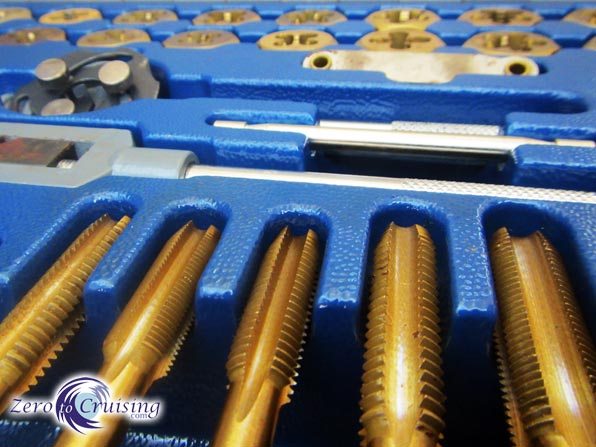 Off to hike to the hot lake