When muscles won’t cut it

Making the decision to invest in a large tender started us down a road with a couple of significant obstacles. To begin, we have enlisted the services of X-Marine here in Grenada to complete a major reinforcement of One Love’s davits. While the static load of the tender is about close to what the davits are specced for, we are not convinced that it will be enough in a seaway. I’ll write more about that when the actual construction begins. At present, the guys at X-Marine are making templates and fabricating pieces in their shop, which happens to be just across the lagoon from where One Love sits on the dock.

A much smaller issue, but one that still requires a solution, is raising the tender up onto the davits. Even though we purchased a RIB with an aluminum hull, giving us a great weight savings over a fiberglass model, the large outboard makes it a heavy beast to lift. To add to the challenge, the small single-speed winches mounted on the side of the davit arms are not well situated to apply leverage. I actually have to get up on my tip toes to get any kind of weight behind it.

We have already upgraded the block and tackle on the davits from a 3:1 to a 5:1 and now to a 7:1. Even with that increased advantage, raising the engine side of the tender with the little winch is a non-starter. Our friends Peter and Bobbi, whose boat Grand Cru has exactly the same tender and set up, pointed out that, if long enough, the davit line can be lead directly to one of the large 2-speed helm winches. That helps a lot but to be honest, it’s still a bear to grind it up.

The solution, of course, would be to have an electric winch. Many people are surprised to hear that a boat of this size does not already have electric winches at the helm. From a sailing point of view, I don’t really miss them. It sure would be nice for this dinghy issue though, and perhaps raising the main.

Also without an electric winch, Peter and Bobbi shared how they use a purpose built marine drill with a special bit that fits into a winch to power their tender up. They also told us that they have had issues with the motor on the device*. It just so happens that our friends Dave and Deb on Alexian, a 40′ Leopard here in the marina, happened to have one of these tools and he was eager for us to test it out. At the time we only had the 5:1 block and tackle rigged and when trying it out on the small winch, I quickly bailed on the idea as I could tell that I was going to kill the drill. After we upgraded to the 7:1, we tried it again using the larger helm winch and on single speed, it would do the job. I still wasn’t convinced though.

. Wanting to compare the two, I made a request on the VHF radio net here to see if anyone had one. I received no response. Yesterday though, we were paid a visit by Jonathan from s/v Chez Nous, another Leopard, who heard my initial request but at the time, was out of range to respond. He was now in the area though and offered to bring it by later for us to check it out. Cool, right?

True to his word, Jonathan showed up yesterday afternoon with his drill case in hand. The Milwaukee is obviously a serious tool, it’s bulk and weight being one of its largest drawbacks. That was not a big deal for us though. What I wanted to test out was its power. Even though we were told the drill was not fully charged, we were pleased to find that it had no problem whatsoever powering the tender up onto the davits! 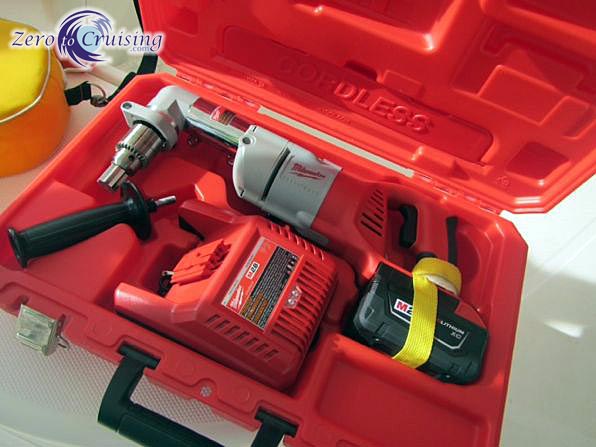 The drill does require the additional purchase of a specialized bit that fits into the 1/2″ chuck. It seemed to work perfectly. We did experience the one issue that I had read about on the net though, that being that the set screw on the drill’s chuck can sheer off when operated under large loads in reverse. Jonathan confirmed that he had had that problem. The solution is to only operate it in forward which, on a two-speed winch, means that it would only be operating in single speed mode. Although slower, that’s not a huge drawback and I suspect it would tax the drill even less. Not a bad thing.

Pros for the Milwaukee:

Given that list of pros and cons, I can say with certainty that we’ll be investing in a Milwaukee drill and bit to deal with this tender-raising issue.

*Subsequent to our trying the “marine device” and speaking to our friends, I emailed the company through their website’s contact form to ask if the rumors about them producing a model with a stronger motor were true. As of today, approximately a week after that message was sent, I have still not received a reply. 🙁

Have we been cursed?