What we do in between rides

Vizcaino is, relatively speaking, a pretty big town. We took the bikes out for a ride this morning to explore, leaving most of the heavy bags in the hotel room. Wow, do the bikes seem light and maneuverable when they are unloaded. It’s amazing, and so fun to just playfully ride around with no set agenda. 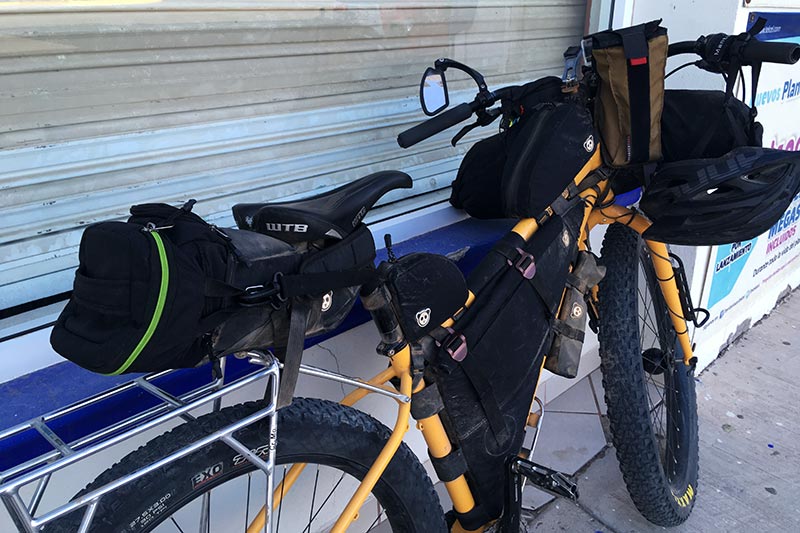 I figured out how to make my camera case fit into my Rogue Panda seatbag harness.

When not out exploring, we’ve been taking advantage of our air-conditioned $20.00 hotel room to tidy up some loose ends, both online and physically. In general, each time we arrive at a town/hotel, the following things are on our to-do list:

In addition to a base layer that we would sleep in if it’s chilly (that hasn’t happened in a few weeks), we each carry two sets of clothes: one to ride in – what you see in most of the pics – and one to change into after our rides. Admittedly, by the time we arrive at a hotel, the riding sets are almost always trashed. Rebecca has adopted laundry as one of her tasks, and she’s got it down to a science, cleaning the clothes in the hotel shower and/or a sink. Although we carry a bit of generic soap with us, we are not choosy and frequently just use a bar of hotel soap to help scrub the clothes clean. We haven’t had anyone kick us out of a restaurant yet so we must be doing at least an OK job.

2. Charge all of our electronic devices.

We carry a laptop computer, 2 kindles, 2 iPhones, 2 cameras, 4 charging bricks, 2 headlamps, and a yet-to-be-used Steripen. All of the devices, with the exception of the computer, can be charged by USB, but it’s easier and faster to get the job done by plugging the items into a wall outlet.

Up until now, the only real maintenance we have done on the bikes is clean and lube the chain and sprockets, and adjust the brakes (when necessary). When we first started out, I ordered a bottle of T-9 chain lube off Amazon because I was familiar with the T-9 brand from the boat. When we reached FASS Bikes at Vicente Guerrero, Salvador showed us the lube that they recommend, a dry lube called Squirt. It seems to be much better, and doesn’t attract all the dust and dirt that the other stuff did.

The one other piece of maintenance that we had planned to do here was to tighten our chains a bit. They had obviously stretched since we first acquired the bikes and had started to sag. Because the bikes have Rohloff hubs and not spring-loaded derailleurs, the chains need to be tightened manually. The process is quite simple (once Daniel from Tumbleweed explained it to me) but we ran into a snag: I needed a 6mm Allen key to do the job, and none of the fancy ones that we were carrying would fit! 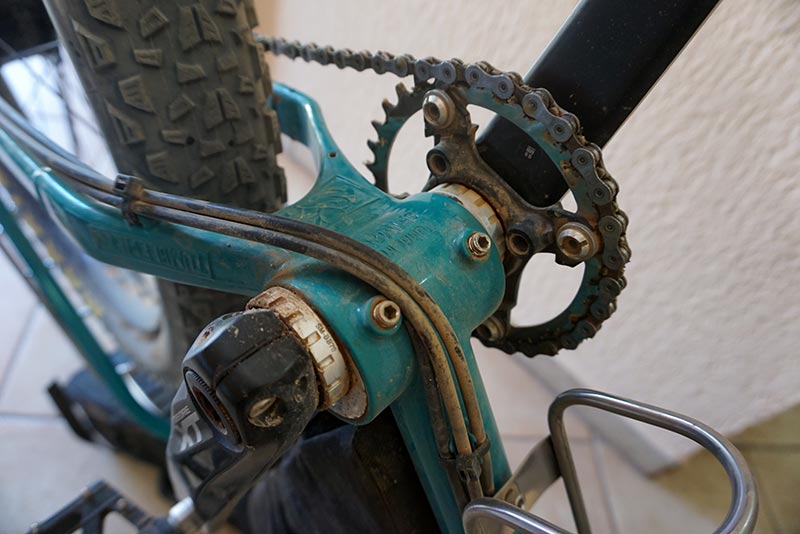 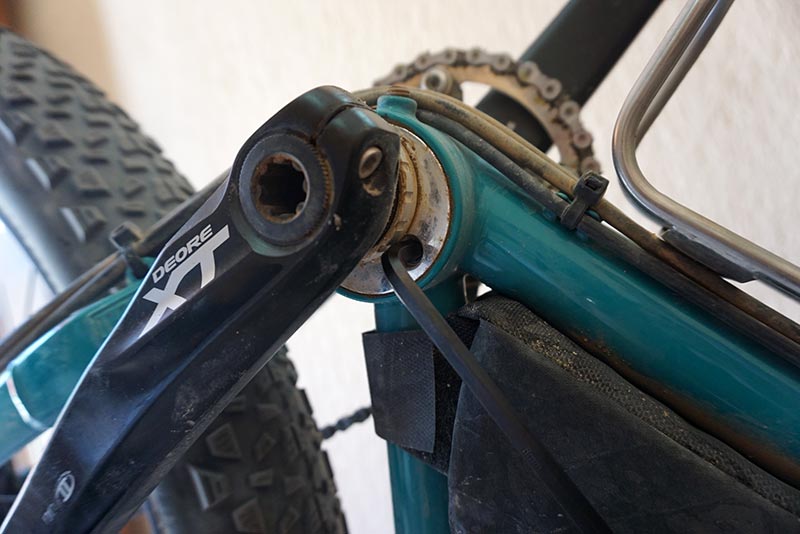 Fortunately, as I said, Vizcaino is fairly large, with a good selection of stores. I found a few well-stocked hardware stores (ferreterias) and was able to pick up a set of Allen wrenches for 155 pesos (about $9.00 US). As the whole set is quite heavy, I plan to only keep the 4, 5, and 6mm wrenches. I’ll leave the rest of the set behind at the hotel. 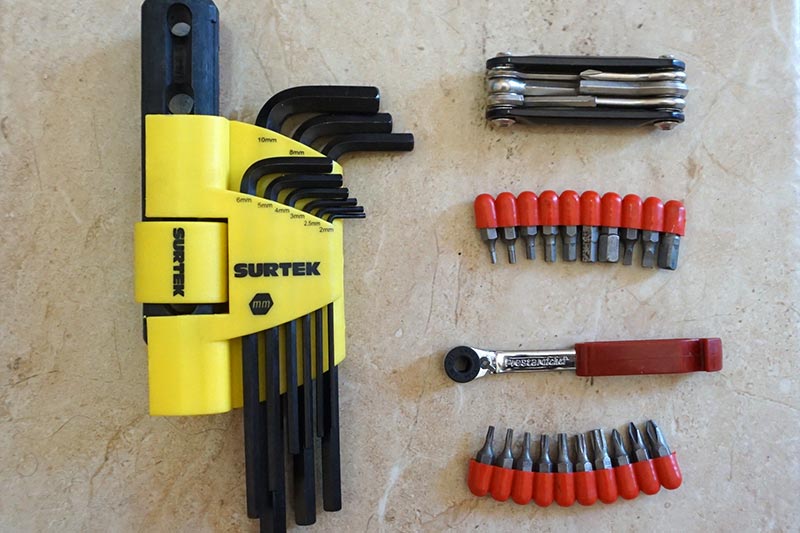 New Allen wrenches left, the tools we were carrying right.

Also on our ferreteria shopping list was alcohol. No, not the fun kind, but the type that we burn in our Trangia stove. We carry approximately a liter between us, and obviously try to stock up before we run out. The last time we refilled our bottles was when we were at Rancho El Coyote, back in the middle of June. Based on that, we should be good for another month or so. 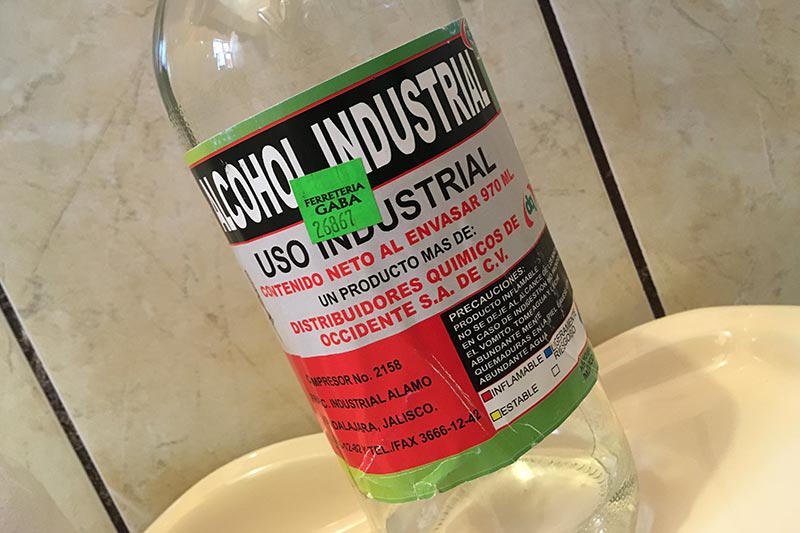 We need to look ahead at the route we’ll be taking and plan what provisions we’ll require for the next legs. In this case, we only have a 2-day ride to another large town, San Ignacio, so won’t have to stock up much. We did have a bit of an issue that was preventing us from going shopping though: the ATM here doesn’t like any of our cards!

The last time we had access to a bank was in Vicente Guerrero, about three weeks back. Even though we thought we were carrying enough when we left there, it’s difficult to estimate, and by the time we reached Bahia de Los Angeles, we had started seriously rationing our pesos, using US dollars from our emergency fund to get us by. We knew that there was an ATM here in Vizcaino but what we didn’t realize is that it has caused many (most?) other cyclists problems. I don’t know what the exact issue is but it would only allow us to draw out 1000 pesos, and only from one of our 4 cards. That may sound like a lot but to be clear, 1000.00 pesos is only about $59.00 US, and we were charged a $5.00 fee to get even that tiny amount!

With the help of a friend, and some of his friends, we were able to come up with a partial solution to the problem. We now have some cash, and hopefully it’ll last us until we reach Mulege. For anyone following our path, I would strongly suggest that you take a serious look at the route when in Vicente Guerrero, and before leaving there, withdraw all the cash that you think you will require until you get to Mulege, the next ATM after Vizcaino. Just assume that you’ll have similar problems here and plan to not use this machine.

EDIT July 11, 2017: OK, it’s possible that I may have found part of the issue. As best as my broken Spanish allows, it seams that in order to withdraw cash, you need to use the leftmost ATM inside the bank. The other three, although they appear to be working, do not dispense cash. After asking for some help, I managed to get a cash advance off one credit card using that particular machine. It was a lady working there who explained the above to us. Of course, I could have totally misinterpreted her explanation.

Watching a volcano erupt from the top of another volcano