What if…? I happen to think that this is the beginning of the question(s) which keeps good mariners out of trouble. Conversely, I also believe that the failure to ask the important “what if” questions is frequently the root of many nautical problems, if not catastrophes. What do I mean?

Take for example our short trip yesterday along the southern coast of Grenada. We departed Calivigny Harbor at 8:00 AM with Hog Island as a destination. As it frequently does in this area, the wind was blowing out of the southeast which meant that for the majority of the trip we would be on a lee shore. For those not fully up to speed on their nautical terminology, what this means is that the wind and waves were blowing our boat towards the shoreline as opposed to away from it. With our engines operating properly, this isn’t an issue. If we were to have had an engine failure though, it would have allowed Mother Nature to take over and drive our boat onto the nasty reefs and rocks which border the coast, an action that would have almost certainly spelled the end of ZTC. So where does the “what if” thing come into play? Unlike some captains that we see steaming along the shore in water that is surely deep-enough, but a scant distance from the rocks, we actually considered the above scenario. To account for the possibility of an engine failure, we gave ourselves plenty of sea room, staying a considerable distance offshore. This added distance would hopefully have given us the time necessary to raise sails, fix the engine problem or whatever.

That’s a pretty serious scenario, isn’t it? The concept of asking these types of questions shouldn’t be limited to issues like that though. As another example, I had a discussion with a cruiser one time about solar panels, generators, etc. Because he had asked about it, I was explaining that our Honda generator served as a backup for us and we only ran it when our panels were not able to keep up with our electrical usage. Another cruiser was within earshot during this conversation and was quick to share that, because they had installed so many solar panels on their boat, they did not need a generator, basically implying that the Honda was a stupid thing to invest money into. Again, I have to ask the “what if” questions, in this case, what if the sun doesn’t shine, or the solar charger burns out, or whatever? Does it not pay to have a back up available to protect your expensive battery bank? Is that not the prudent thing to do? I think so.

There are a dozen or more times each day that we go through this process of asking ourselves:

In some cases the questions are super serious as in the first example and other times, significantly less so. Perhaps the habit of asking these questions is only acquired after one has had their share of problems? 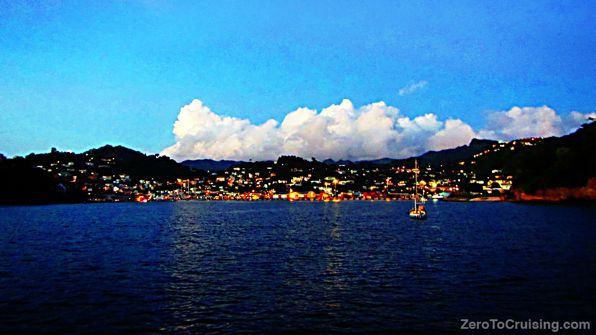 Time flies and you never know where it’ll fly to

To the bitter end

Not just seeing but being seen.