We traded in our sail boat for a motor boat!

Yes, it’s true. After removing our mast in Oswego, NY yesterday, prior to beginning our journey south through the NY State canal system, we now have a motor boat!

As I have mentioned here on numerous occasions, how we would safely carry our mast during this part of our journey was a source of great concern for me. After all, dropping the mast in the water, or on deck for that matter, would be a huge problem (read HUGE $$$$). Here is ultimately what we ended up doing, greatly inspired by the catamaran Windsong which spent only a single night at our marina a few weeks ago.

The first decision was where to carry the mast: in the center on top of the bimini or on the side on one of the hulls. Because of our rig, we opted for the center option so that we wouldn’t have to remove the spreaders.

After making this decision, we then constructed “gallows” out of plywood, sandwiching 2x4s together in a shape that would not only hold the mast but also allow a vertical 2×4 “pole” to slide into a slot. We made 3 of these: one for the bow, one for the stern and one for the mast step. The gallows had enough play in them to allow some foam to be inserted to protect the mast (Note: The first attempt at building them did not have enough room for even the mast. We had to trim them in a band saw to add more space). 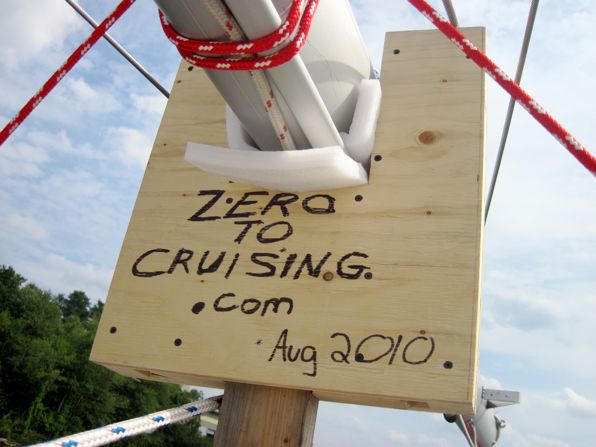 These gallows only get a 1-way trip on our boat.
We’ll be leaving them wherever we put our mast back up.

Rather than using a sawhorse-type arrangement where additional wood would be used to provide lateral support, we instead used line. Lots of line. Brand new red 3/8″ line as a matter of fact. Just as the guy lines on a tent keep the poles vertical, we used lines to each hull, cinched down with trucker’s hitches to hold the mast stable. In addition to side to side stability, we also needed to ensure that the mast couldn’t move fore and aft. More lines were used for this, much like spring lines on a boat. 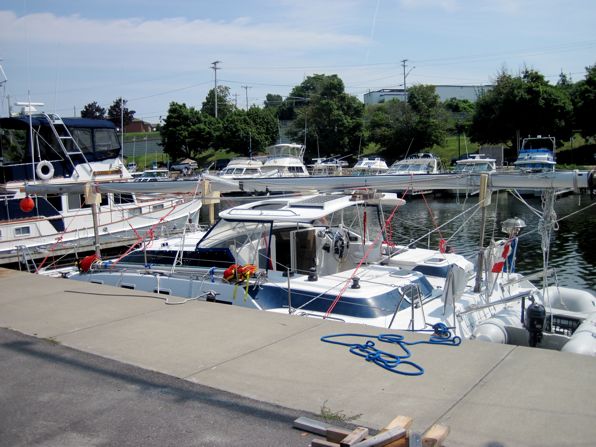 You can see the boom, and battens, lashed together on the port hull. We used a couple of red PFDs and a large cockpit cushion for padding. The mast is also resting on a pad on a strong section of the hard bimini.

A chiseled-out 2×4 was fit into the base of the mast to support the roller-furling forestay. All the bits and pieces were lashed together and the end result is pretty stable. Truthfully, that is an understatement. I think it is very stable, although I’ll give you my final verdict after we make it across Lake Oneida (Lake Oneida is known for sometimes being particularly rough)! 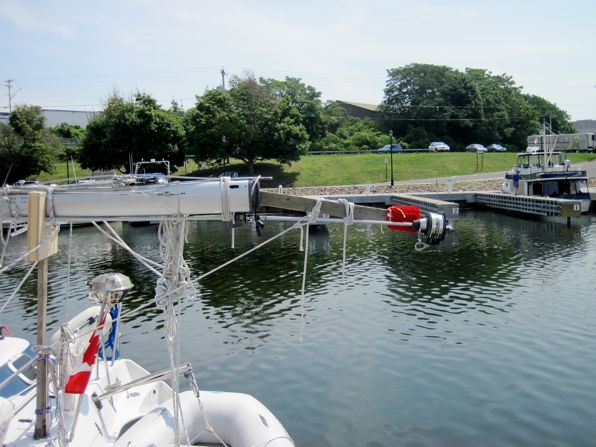 That red car-wash mitt fit perfectly on the 2×4. 🙂

Although Bernie, who ran the crane at the Oswego Marina laughed at us, we tied our big orange fender ball to the tip of the mast. We also fit a bright red car-wash glove over the 2×4 in the other end of the mast. The purpose of these items was not to protect the mast but rather to make anyone helping us with lines SEE the mast as it projects out away from the boat. Because it doesn’t have the mass of the boat, I have heard that many people don’t focus on the mast and thus aren’t ready to protect it, or themselves as it moves towards them. 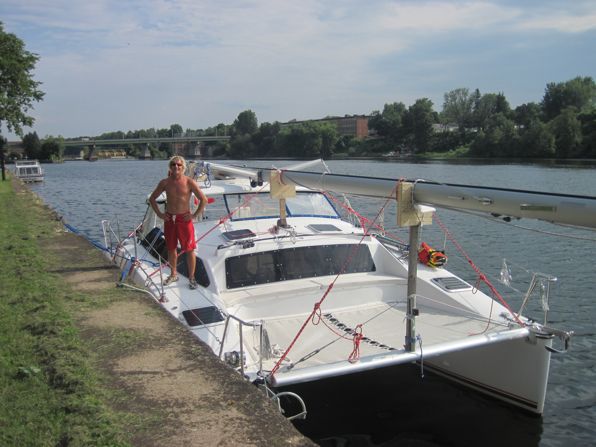 On the wall in Fulton, NY where we stopped for our first night in the canals.

So, that’s it. Fingers are crossed that it stays in place long enough to get us through the canals. If you choose to use a similar method, I hope it works for you too.

The following video has Rebecca narrating our way through one of the locks. These locks are truly amazing!

We got shot yesterday!