We made it! Was there ever any doubt?

When a passage is just far enough that the distance can’t be covered during daylight hours, cruisers typically schedule their departure time so that they arrive at the destination with good light, let’s say morning. That was how it was for us when we raised anchor at 4:30 PM to head to Trinidad. With a conservatively planned speed of only 5 knots, we should have arrived at the Bocas, the cut that leads through to the port of Chaguaramas, 16 hours later. What followed, unfortunately, was the slowest passage ever. 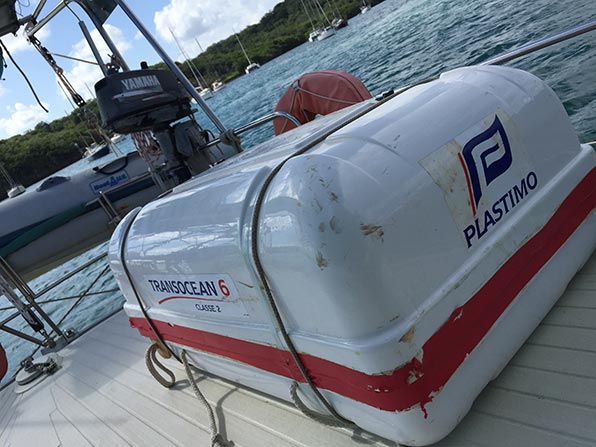 Life raft secured on deck for the passage

Of course we had checked the weather and knew that with the south east wind, we’d likely end up motor sailing. We were OK with that; we just wanted to get there. The passage started off a bit bumpy but Frost rides through that quite comfortably. With the rudder issues that we are having, I wasn’t too keen to push the boat hard. We settled in at about five knots, enjoying the ride. 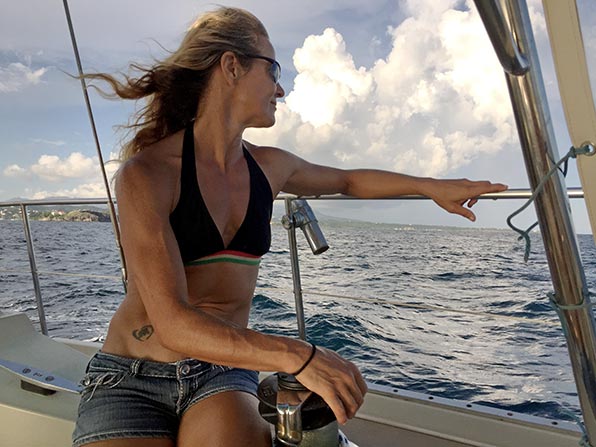 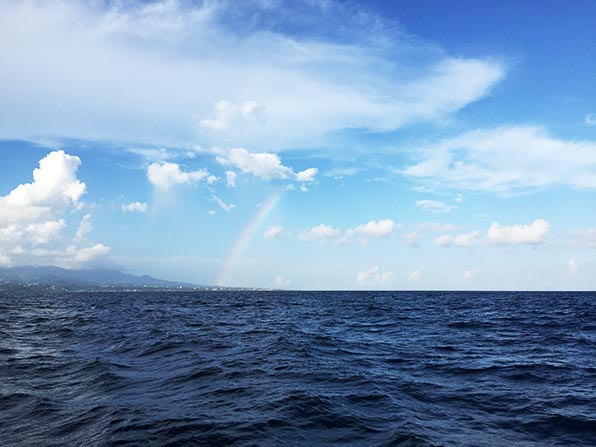 A rainbow is a good omen, right? 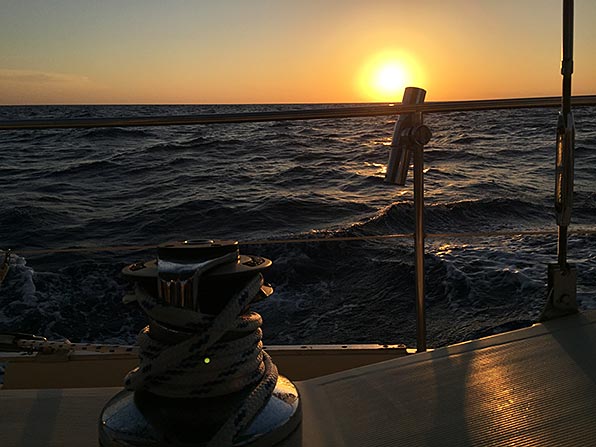 It’s said that passage making is 95% boredom and 5% more excitement than you want. This trip was a good representation of that. At some point before midnight, when we were both still awake, we heard a thump of some kind towards the starboard side of the boat. Since nothing seemed to be too amiss, we figured it must have been the slap of a rogue wave. Unable to keep our genoa trimmed in properly after that though, we soon discovered that the sewn eye that attached our genoa sheets to the clew of the sail had broken. That was the noise we had heard. Could it be fixed? Of course. But at night, on the ocean, with the boat pitching up and down, things get a bit more challenging.

Expectantly, we also had to dodge a fair amount of commercial traffic. AIS would have been a godsend when dealing with this, and I really regretted not having it aboard. Oh well, that’s what navigation lights are for.

As the night went on, the wind speed dropped and along with it, our speed. Struggling to even make four knots at times, we regretted not cleaning the bottom and the prop before departing. 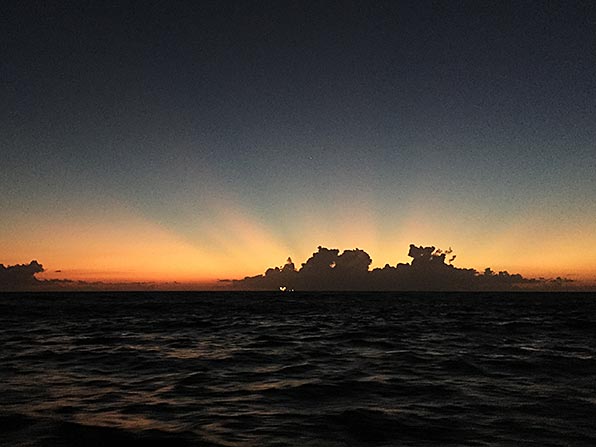 Sunrise on the water is often spectacular. 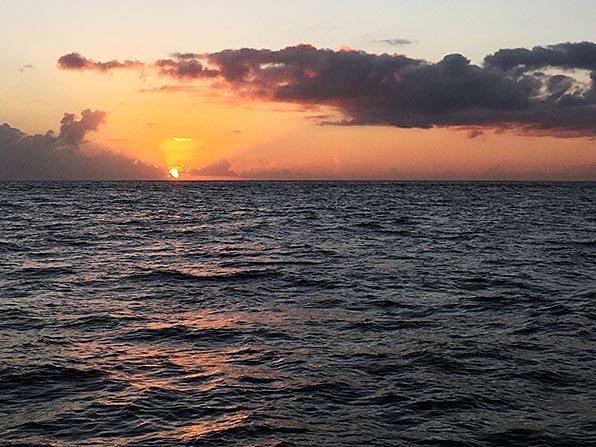 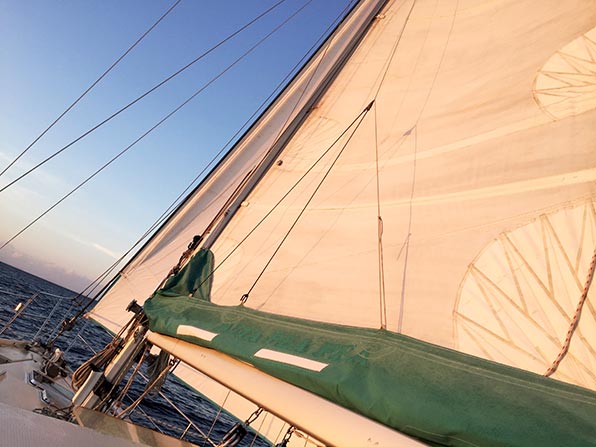 Crawling along with full sail up. 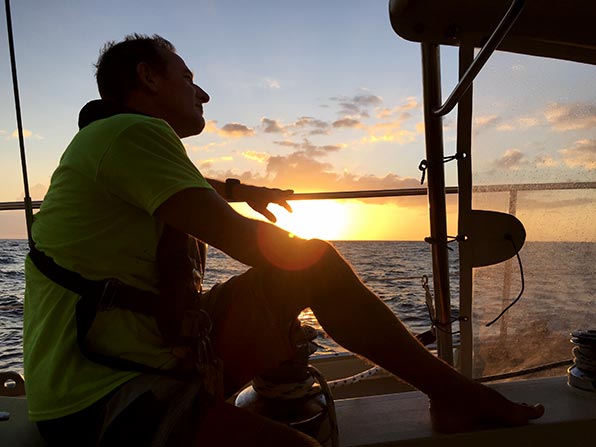 Even though we were both wearing sweaters during the night, the day heated up quickly. 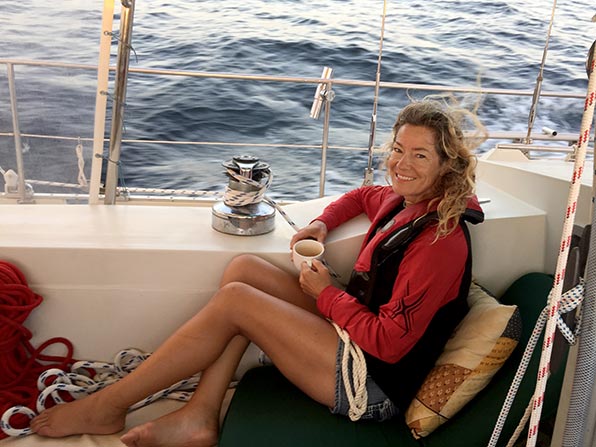 Just under 20 hours after leaving Grenada, we tied up Frost to the customs dock in Chaguaramas, preparing to make ourselves all legal. Even though we were sleep deprived (it’s tough to get a real sleep routine on a one night passage), we docked perfectly, in spite of not having anyone there to help us with our lines. After paperwork formalities were completed, we also managed to score the last remaining ball in the mooring field. Happy days!

Once Frost was squared away, we dropped the tender in the water and went to Peake Yacht Services to check in. I have to say, we were both extremely impressed by how we were welcomed there, and also with all of our correspondence with them leading up to that point. We are scheduled to haul out at 8:00 AM this morning. Let’s hope that we can get all of our out-of-the-water projects completed promptly and with little drama.

Zen and the art of anchoring