We had better not sink the boat!

Although commonly found on a great many boats, Rebecca and I never bothered with acquiring a liferaft for ZTC. In the absence of a catastrophic fire, I was confident that our PDQ would remain afloat, even if it suffered a significant blow or was inverted. Even if there was a fire, we still had our tender. The Leopard is a different story though, especially given that we will be running it commercially. In this case, a liferaft is required.

When the 4600 was surveyed, there was a liferaft on board but we were told that it was not really included. Basically that meant that yes, we could have one but no, it would not likely be up to date. In order to be considered “legal,” a liferaft must be inspected and repacked at predetermined intervals of time. As we were not yet in Tortola, we arranged to have the raft picked up from the boat and delivered to St. Thomas where they would look after that inspection and recertification.

When we arrived in Roadtown last evening, our newly-repacked raft was waiting for us in a cart, ready to be loaded back onto the Leopard. I am going to say now that we had no idea just how heavy a 12-man liferaft is! With three of us working at the task, we managed to get it back into the locker where it will reside. Having done that, how any one person could deploy that raft, I don’t know. I think it would be a challenge for two people to get it out of the locker and into the water! Good thing we don’t plan on sinking the boat. 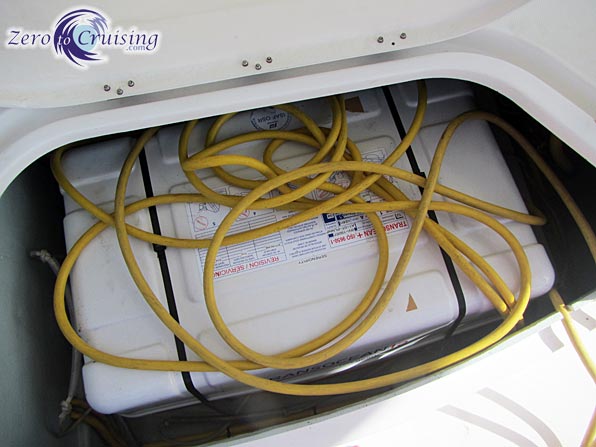 Our 12-person liferaft in its new home.

10 tips for spotting a charter boat

No longer a Ronin

Sad to see them go!