We had a low-power evening last night

Today’s post is being written in Five Islands Harbor, our nice, calm and quiet anchorage in Antigua. Once again, we have the bay all to ourselves.

Our sail to Antigua yesterday wasn’t ideal but we did make it here in one piece. When we first set out at sunrise, working our way through “The Narrows” between St. Kitts and Nevis, we had the sun right in our eyes, as I knew we would. What I was hoping for though was that the wind would be a bit north of east instead of south of east, where it was actually originating. Frustrating is probably the best word to describe this. I commented to Rebecca that I don’t know why I even bother to check the weather sites when they are so frequently wrong. The wind and waves were so poor in fact that after getting beyond the reefs, the two of us were faced with the decision of whether to carry on to Antigua or divert elsewhere. Our options were:

Returning to St. Kitts was an option but the weather, as I read it, wasn’t going to improve for some time so we would have been kind of stuck there. Given that we had already cleared out of customs, that would have made that a bit of a problem too. Diverting to Redonda, or the much larger island of Montserrat, would have given us a better point of sail but we again would have been stuck there with an even more difficult time getting to Antigua later, the place where we really wanted to go. Ultimately we decided to suck it up and continue on towards Antigua, picking a heading that we could motor sail with one engine. As it turned out, the wind did back a bit (move counterclockwise from ESE to ENE) and the large waves laid down some, allowing us to point a bit closer to Antigua. These small changes made the difference between us arriving in a strange port in total darkness or daylight, the latter being much preferred.

When we finally set the hook and got the boat squared away, we checked our battery voltage and seeing that it was a bit low, decided that it might be a good idea to run Ronzo, our Honda 2000 generator. Apparently Ronzo was also not too happy with the trip because he did not feel like working, causing us a bit of a problem. With sunlight all but gone, Ronzo was our only way to charge our batteries.

Was the generator out of fuel? We added some but that didn’t fix it. Perhaps the oil was low (it has a low oil sensor which will turn it off). We changed the oil but that didn’t help. What about the spark plug, the last remaining easily-checked item? I did pull it out, planning on replacing it, but found that we didn’t have a spare. Doh! I re-gapped it and put it back in, not believing that it was part of the problem anyway.

What was the generator doing, or more specifically, not doing? It would start and run fine, but as soon as I plugged the shore power cable in, putting it under load, it would start to cough and spit, the same sounds that it makes when it is about to run out of gas, and then die. I checked the service manual that I have for it (the user manual that comes with the generator is all but useless for troubleshooting) but it didn’t give an easy solution for this issue. With daylight pretty much gone, we were forced to give up trying to fix it anyway.

So, our batteries were a bit low, our computers weren’t charged, my Kindle

was about to die… as I said, we had a pretty low-power evening. It all worked out OK though because with the early start we had and the long, bumpy day on the water, I was perfectly content to hit the sack early.

So, what happened this morning? I’m obviously typing this on my computer so we must have found some power somewhere. Well, to start, the sun came out (in between rain showers that is), allowing the solar panels to do their thing. Administering to Ronzo was top on our list of tasks though. Both Rebecca and I had gone to bed dreaming of potential solutions. We started the process by firing up the generator and letting it run for a good 10 minutes without a load. No problem, as I expected because it worked fine like that last night too. I then plugged a hair dryer into the outlet (yes, we do have a hair dryer on board — it’s good for warming up the ends of hoses). It worked fine with that as a load. Now it was time to try the big job… the shore power cable plugged into the boat’s inverter/charger. Guess what? It worked. The ONLY thing we changed is that Rebecca checked the connection to where it was plugged into the boat and found that it may not have been fully locked in. Could that have been the problem? I fail to see how but I’m definitely one who knows how to take YES for an answer. Ronzo, at least for the moment, is apparently happy and is doing his job once again, and that make our batteries, Rebecca and I all very happy.

By the way, as we were motoring into Five Islands Harbor later yesterday afternoon, I could have sworn that someone hailed us on the VHF radio. There were no vessels close enough to see our boat’s name and the person who hailed us never responded when I answered. I wonder who it was! Perhaps someone in Antigua who was following our Spot track? 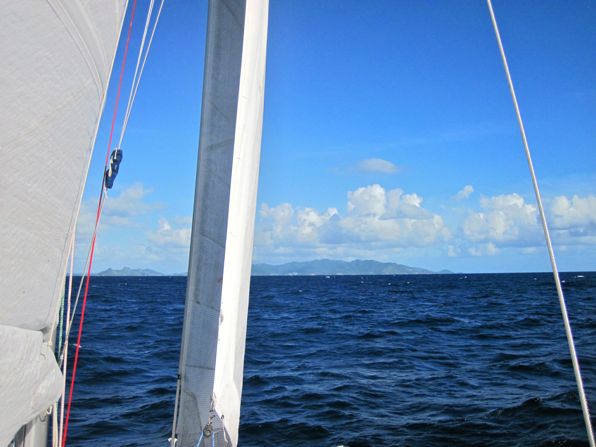 Antigua, about 5 miles off. 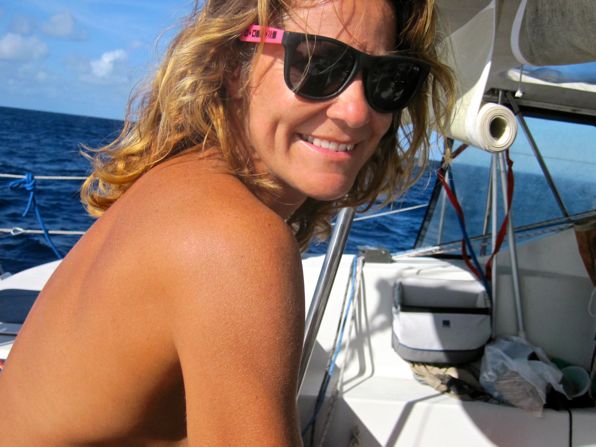 Although windy and bumpy, the day was largely sunny making it good for tanning. 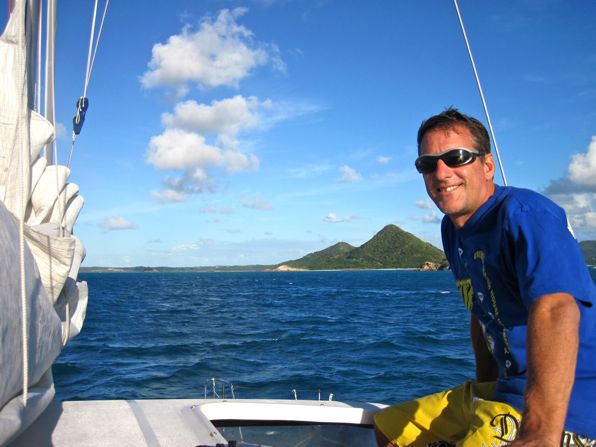 Up on the “balcony” as we work our way into the harbor. 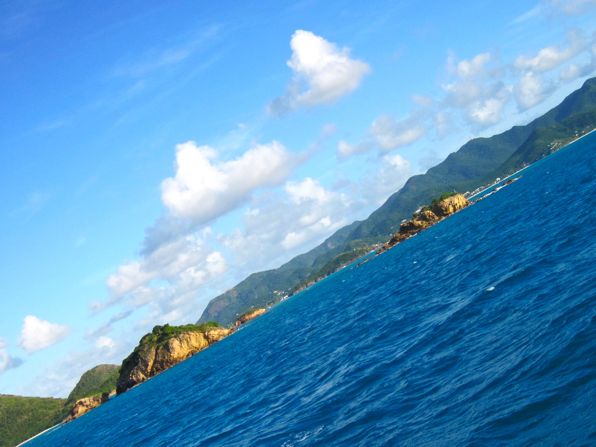 The “Five Islands” which the bay is named for. 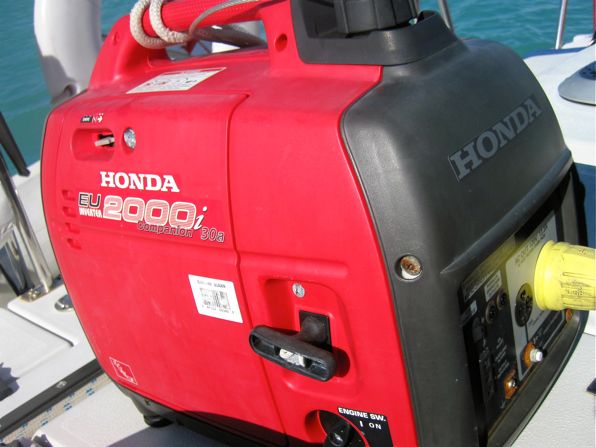 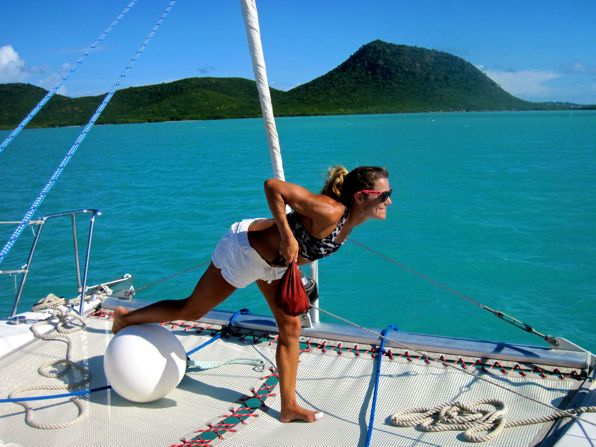 And so is Rebecca! It was so rough yesterday that she couldn’t work out while under way, and that didn’t make her very happy at all. Now she’s happy! 🙂

Razor Grass is not our friend

The hills only go up