There were a couple of times yesterday where, during an intense bit of rain, our visibility was reduced to almost nil. Of course, both times this occurred we were attempting to travel under bridges, one of which was a swing bridge. We knew they were there and had even made contact with the swing bridge tender but we were almost on top of the bridge before we could make it out.

It may sound obvious but visibility plays a huge role while navigating, which is no doubt why binoculars are such an important piece of boaters’ kit. The primary navigational aides, lateral buoys and daymarks are colored red and green so that they can be easily distinguished but they are also shaped differently (red “nuns” are pointy and green “cans” are square topped). This is important because, at least for me, before the colors can be determined you can often distinguish the shape of the mark.

I found the following on John Vigor’s Blog:

In clear weather you can distinguish the shapes of prominent lighthouses, or houses, and trees from about 8 miles away. Individual windows in a building are discernible at about 2 miles. A person at 1 mile is a moving black dot without limbs. The movement of a person’s legs, or a rower’s arms, is discernible at 400 yards. You can make out a face, but not recognize its owner, at 250 to 300 yards.

The above is good info because it tells us when we have to put our clothes back on when we are doing some sailing Au Naturel. 🙂 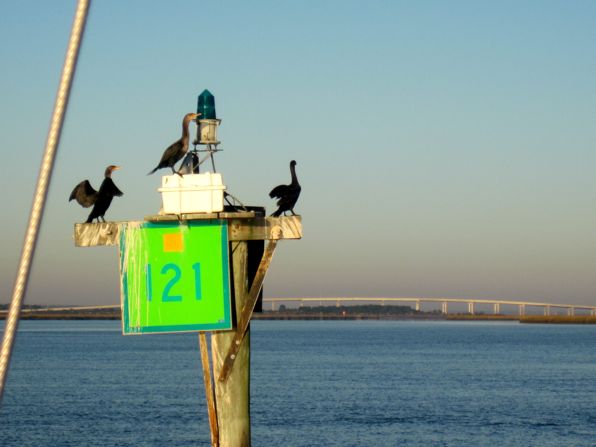 All markers come with at least one guard bird. This one must have been special because it had three guardians. 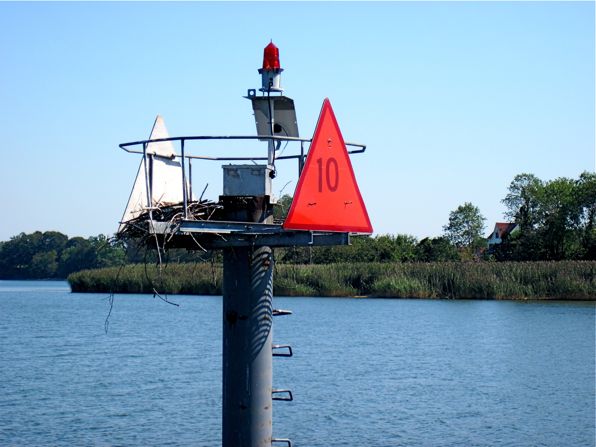 This marker’s guard bird must be out on patrol but you can see his nest.