What to do with that used motor oil?

Compared to many cruisers, we spend very little time in marinas. That said, we’ve learned that, at this time of year, carnival time, spending money to be on the dock at Port Louis Marina is worth it for us. Why? Because PLM is ground zero for carnival!

We know that dock space during carnival can book up, so we actually made reservations months ago. Even though the actual carnival festivities really just take place on Monday and Tuesday, we booked ourselves an entire week on the dock, giving us a few days before the parties to complete some projects, and a few days afterwards to recharge.

Would you believe this is now our sixth hurricane season in Grenada?

The first item on our project list was to change the oil and oil filter on our engine. We got that looked after first thing yesterday. While properly disposing of used motor oil can often be a chore, at this time of year, with J’ouvert just around the corner, I could almost sell the toxic stuff! Why? Because during J’ouvert a select group of Grenadians actually coat their bodies in the smelly, slippery substance before they parade through the streets. This group, known as Jab Jabs, are one of the most unique parts of Grenadian carnival festivities. Yes, as the top image shows, we even joined in with the Jab Jabs one year (2011), coating ourselves with oil. Before you say it, yes, we know it’s bad for you, and no, we don’t do it anymore. The last few years we have restricted ourselves to playing with the colorful paint that is also plentiful during J’ouvert.

You can wear it, but don’t spill it!

On the subject of oil changes, a tip that I learned was to use a disposable baby diaper to soak up any spilled oil. There are oil absorbent products that can be purchased at chandleries, and I typically keep a number of them on hand. Baby diapers can be purchased anywhere though, and are relatively cheap. We keep a package of them on board too, just in case. 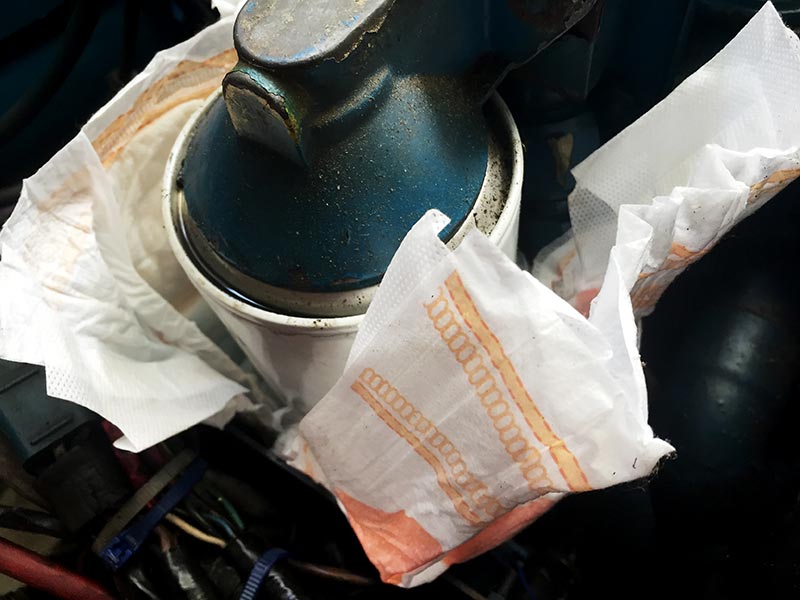