I’m sure I’ve written before about how uncomfortable it can be to be at anchor when waves are hitting your boat at an angle not inline with the wind. Boats are made to rock to and fro, not side to side. Sailors too it seems. One way to deal with such a swell is to run a bridle line from your anchor rode to the side of your boat, trimming it in to adjust your boat’s alignment away from the wind and towards the swell direction. Another way, and one that the power boaters use frequently when in select anchorages, is to run a second anchor out from the stern towards, or even on to, the shore. This again can be used to alter the direction that the boat is pointing. When we first picked up the mooring in Bahia de Tortuga on Culebrita, it was nice and calm. As often happens though, as the afternoon drew on, a nasty swell developed. I thought it might be a great time to pretend we were a power boat and deploy our Fortress as a stern anchor and Rebecca, being the agreeable sort that she is, didn’t argue. 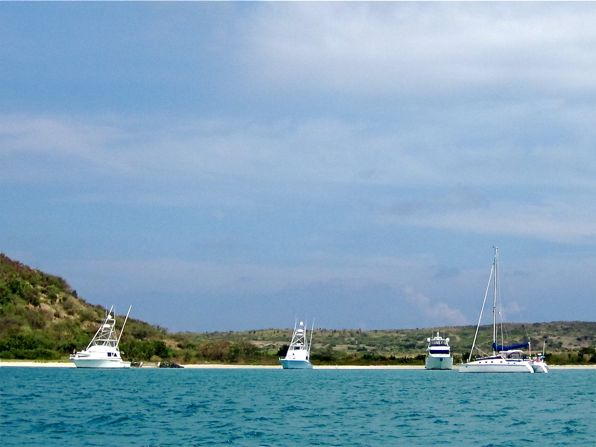 This pic is from Bahia Icacos on Vieques but it shows how the power boats anchor stern to the shore.

While Rebecca stayed on board paying out the rode (rope), I hopped in the dinghy, taking the anchor out towards shore. I placed it down in a spot that I felt would give us the correct angle when the rode was trimmed in. While I stayed in the water, watching the anchor, Rebecca put the rode on a winch and started drawing in the slack. And the idea would have worked too IF ONLY we weren’t fighting about 17-20 knots of wind!

When we finally got the boat trimmed in to the proper angle, the swell’s ill effect noticeably reduced, I really wasn’t comfortable with how much strain the wind was placing on both the boat and the anchor at that strange angle. Because of this, we decided to scrap the idea and retrieve the anchor. This is where the fun started. Do you think we could get that anchor out of the sand? Not a chance. It was stuck. Like cemented-in kind of stuck. I pulled and pulled, having to dive down each time to do so. There was just no budging it.

At this point I swam back to the boat and got a little plastic shovel that we keep on board. After diving down countless times, trying to dig the anchor out with this little shovel, Rebecca came out to spell me a bit, lending a hand. We took turns diving over and over again, scraping away the sand. As the daylight was quickly fading, we finally broke it free. For the record, this is only the third time we have ever used this anchor, once as a kedge back in Baltimore, once as a stern anchor in Florida and now this. Each time it has been crazy hard to retrieve. I guess it’s a good thing when your anchor holds too well. I think. 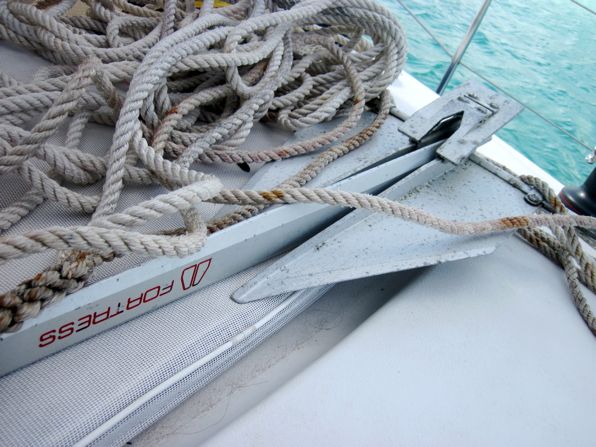 This anchor is a beast!

Just as we have come to expect certain noises on our boat, and react, sometimes with alarm, when a strange noise is heard, we do the same during our little hikes in the woods. We have now become accustomed to the noises in the bushes that the little lizards make, much louder we think than their small size should be able to create. Most bird noises we have come to expect as well, although the one that sounded like a car alarm back on Coffin Island made us stop and take notice. While hiking around Culebrita though (not up to the lighthouse, that is off limits!), we heard some sounds that definitely made us stop in our tracks. Literally. 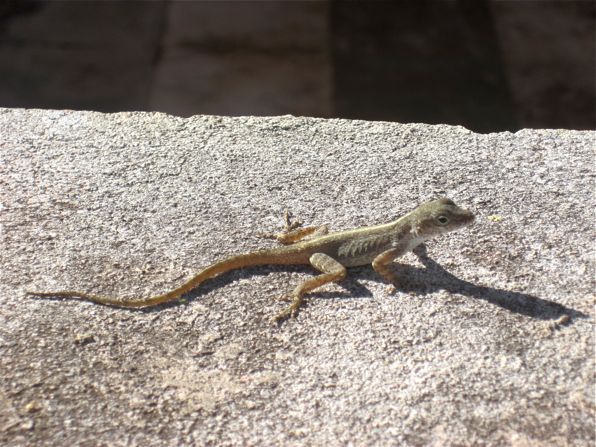 Was that a baby crying? Was that snorting? What kind of animals live on this island anyway? If we were back home, we would have known what, if any, dangerous animals could be lurking in the bushes. Down here though, we have no idea. Pressing on towards the noises cautiously, peaking around the corner, we spoke loudly as we have heard you should do to scare off any predators. I even threw a couple of rocks in the general direction of the noises, to no effect. Perhaps they were wild boars? We did hear snorting. Even if they weren’t dangerous animals typically, we thought we heard the sound of babies and we both know not to get in the way of a mother and her kids.

As we drew closer and closer, we were both surprised, and relieved, to see a goat, standing up on his hind legs, eating the leaves high up on a tree. And then there was another. And another. Both babies and adults were all sitting around, munching on some leaves. Fortunately, the ones with the big horns did not feel compelled to charge us as I’m pretty sure I couldn’t outrun Rebecca and we all know what that means (you don’t have to outrun the _________, just the slowest person with you!). Wild goats… next time we’ll be prepared. 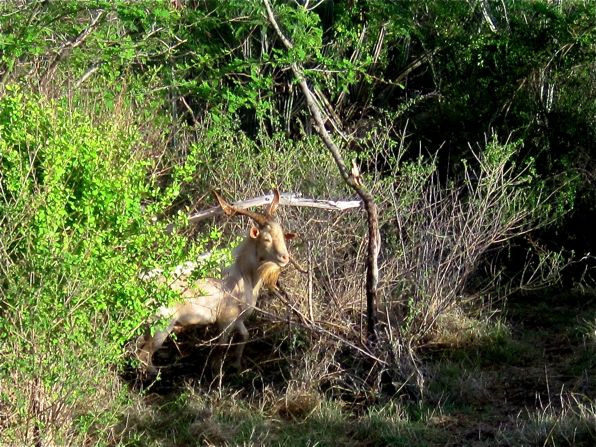 Who was more scared, him or us? I vote us.

PS: Get your Culebrita photo fix on our Facebook page. I just published 90 new pics. Don’t worry, you needn’t be a Facebook user to view them (if there are actually any people left out there who aren’t on Facebook).