Last week I wrote about bringing our torn main sail in to get fixed. On Friday we dropped it off to Andy at Kingston Sail Loft with the promise that they would fix the tear and check the entire sail over. The place looked crazy busy with people coming and going and sails everywhere. It was because of this that I was quite surprised to get a call on Tuesday from John at the loft, telling me that it was all fixed. I was a bit concerned because I never received a quote for what the repair would cost. Total damage though? Only $50.00! Fast turnaround and fair price. I’m impressed.

It doesn’t stop there though. When I initially brought the sail in I was chatting to Andy about reefing, specifically adding the ability to put a third reef in the sail (it is currently only set for two). I also explained that we tore the sail because we had screwed up when reefing it in the strong winds. Apparently Andy communicated all of this to John and he brought up the subject when I was picking up the sail. They were both able to offer some good advice on the subject. In addition to that, they suggested that I bring our other sails down to have them checked over, and no mention of money was made. They both seem like great guys, and the more smart people we have helping us get our boat kitted out properly, the better. 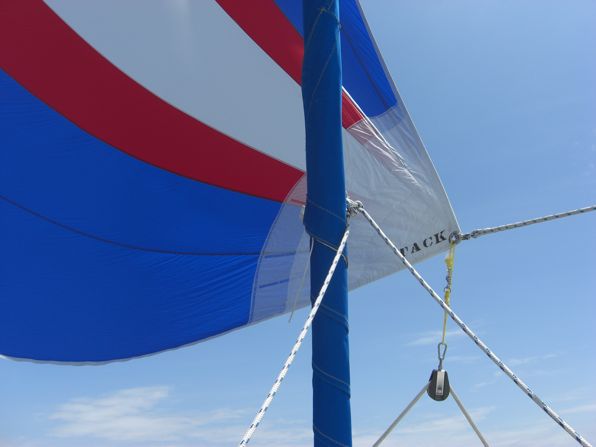 Our colourful spinnaker, which we have not flown since Katana’s delivery trip from Toronto.
Mike 7:09 am

Because I can’t tread water that long!