Adding a swivel to an anchor rode is a bit controversial. Many will advise against doing such a thing, fearing that the swivel becomes the weak link in the system. I tend to be in that camp.

When we upgraded our primary anchor on ZTC to a Rocna, I noted on their website that they specifically said not to add a swivel unless you found, after using the anchor for a while, that it was necessary. I followed that advise and found that it wasn’t needed.

When we took over One Love and upgraded her anchor to a Mantus, I left the swivel that was already on the rode in place. Why? I don’t know really. It just seemed like the path of least resistance when wrestling with that 85 lb. anchor. 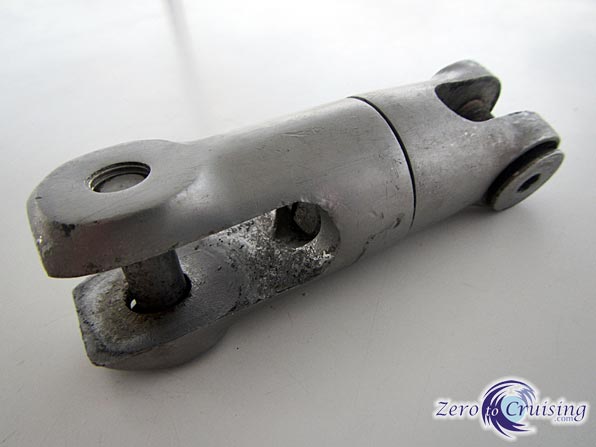 The swivel which was living between our anchor and the chain.

As most of our readers know, we’ve spent much of our time since acquiring this boat on a dock. In the times that we have anchored, we’ve had two occurrences, one taking place yesterday, where the swivel has jammed, preventing the anchor from raising fully onto the bow roller. It took a fair bit of effort, and compulsory cursing, to get yesterday’s situation resolved. Not wanting it to happen again though, when we were at the dock picking up all of our stuff yesterday, I removed the swivel altogether, replacing it with a super strong rated bow shackle. How does it work? Well, the anchor deployed just fine, of course. The true test will be when we try to pick it up. Let’s hope it works.