To bungee or knot, that is the question!

During one of our recent sailing trips, a fuel can that I had relocated on deck began to come loose and slide around a bit. In retrospect, I should have done a better job securing it but the conditions weren’t all that bad so I didn’t put a lot of effort into it. Oh well. After seeing the can begin to slide around, one of the guests that we had onboard suggested that we could use a bungee cord (shock cord) to secure it. I relayed to him the following story about why we seldom use them.

On our second day on the dock in Kingston, just after having taken possession of our PDQ, the marina owner came by to make sure that we were OK. While he was checking out our boat, making sure that our dock lines were all run properly, he took note of a bungee cord that we had in use on the boat. To tell the truth, I can’t even recall where it was, but he went on to share with me how he was not a fan of bungee cords, and that there was little, if anything, that you could do with one that couldn’t be taken care of just as well with a piece of rope, and a proper knot or two. He also mentioned that, if a highly-stretched bungee cord was to break, something that does happen from time to time, it could be catastrophic if the broken piece of elastic was to snap back and hit you in the eye. I believe he said “Imagine if that were to happen when you were offshore!” Is that a likely scenario? No, but given Murphy’s Law, it’s certainly possible. 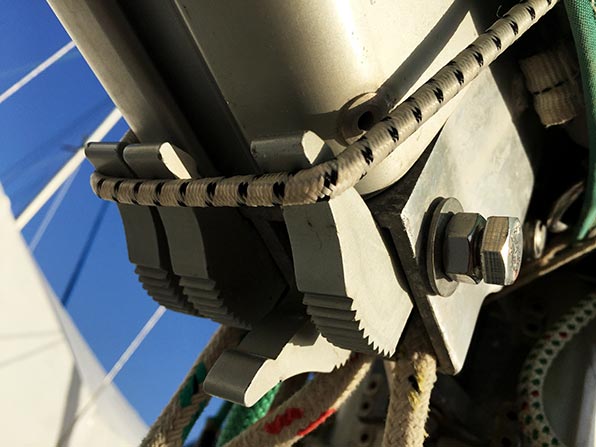 Being completely green at the whole boat thing, I took all that he said to heart, and right or wrong, since that time we have used bungee cords very infrequently. In fact, I can think of only three that are in use on our boat right now: the first holding the broken lid onto a plastic box of electrical connectors, a second holding the reefing line jammers on our boom in the disengaged position, and a third holding our cockpit table secure against a bulkhead when it is not in use. As for the latter one, both Rebecca and I have, independent of one another, each felt uneasy connecting or disconnecting that strong, elastic cord, fearing what might happen if it were to snap. Perhaps it’s time to get rid of it? 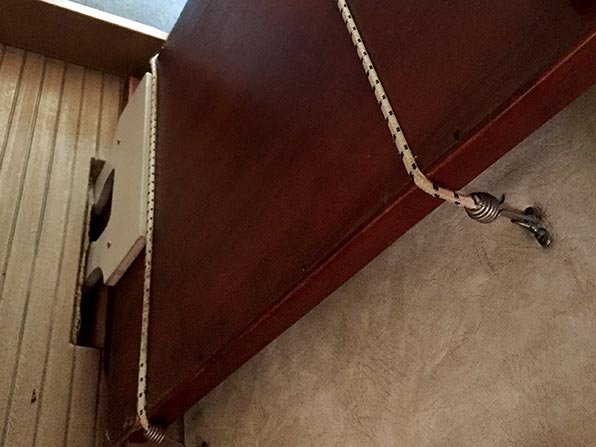 Our cockpit table stored when not in use.

There are few secrets on a little boat.

From Soggy to Bubbly