Countless times I have written about the process of our purging away all the unnecessary stuff and clutter that we had accumulated, both before we headed out cruising and after we set sail. I’m going to take a different tack* today though and talk about the stuff that we wish we hadn’t left behind. I know that some of our readers are knee-deep in this operation right now. Perhaps this might help to prevent some regrets.

To begin, Rebecca and I left behind pretty much all of our dressier clothing, opting instead to bring with us mostly articles in the t-shirt – shorts – bathing suit category. While this is pretty much all that we live in these days, there has been the odd time where Rebecca has wished for another nice skirt or top for a special evening out. Don’t get me wrong… she does have some items like this but you can’t be seen in the same outfit too many times, right? 😉

In a completely different category, we had quite a selection of good micro camping gear that we used during kayak trips. There have been several times where we’ve really wished we had not sold it all as the tent and sleeping bags would have been nice to have.

Even more frivolous than the above-mentioned items would be the costumes and other fun stuff that we purged before sailing. Yes, we had quite an extensive tickle trunk back on land but weeded-out almost all of it. I can’t tell you how many times, when attending a party or special event, we’ve said to each other “if only we still had…” 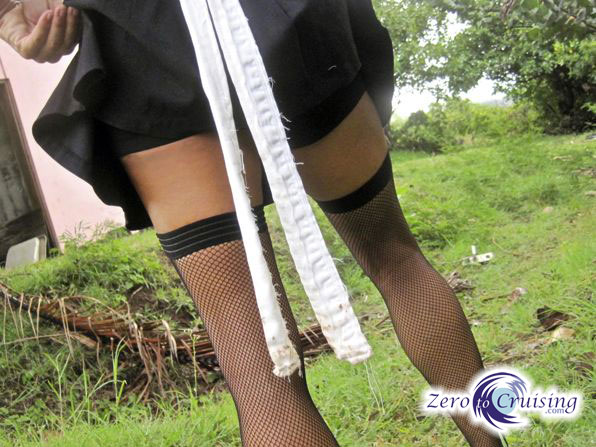 One of the few remaining items from our tickle trunk. When people talk of having fish nets on boats, they probably aren’t thinking of stockings!

The thing is, just about all of the items that I’m writing about would have taken up very little space. And even though we’re very weight conscious on our boat, it needing to be kept light so that it sails well, none of the items in question weighed a lot either. Yes, our selling these items did net us a bit of money but if we had to turn around and buy even a couple of them all over again, we’d be losing cash.

For those of you now currently involved with the purging process, my recommendation is to definitely carry on, get rid of most of your clutter. If, however, you’re faced with some doubt on an item, and you think you’ll have room on your boat for it, bring it along. You can always sell, trade or give it away later if you decide it has no use or it takes up too much space. If it’s of the fun variety though, it might just help to make cruising even more enjoyable for you!

*Just a couple of the sailing terms that have made their way into the everyday English.