Today is not only the day that Rebecca will be competing in the Grenada Sprint Triathlon (375m swim – 10k bike – 2.5k run), it is also when the Port Louis Pig Roast will be taking place, an event that we have been planning to attend for some time. In order to make it easy to participate, we, and a bunch of our friends, decided that we’d sail our boats around to St. George’s from the Hog Island area where we were anchored. And what is it they say about 2 or more boats heading in the same directions? Yes, it was a race!

The “Pig Roast Regatta” officially began at the outer channel marks at Mt. Hartman Bay at exactly 8:30 AM. Was it tense at the start line? You bet. There was exactly 2 knots of wind! ZTC and our friends on Solmate, Eclipse and Sabatticus were ghosting along so slowly that Brandon from Soulmate and Connor from Sabatticus were able to casually swim over to Eclipse to pick up travel cups filled with freshly-brewed Espresso.

During the entire race, the wind never exceeded 8 knots and for the most part, it was between 3-5, many times less. Because of this, we were busting out all of the tricks, including flying our Spinnaker, and at a few tense moments, PADDLING!

The regatta was a ton of fun and it was good that it happened because without it, there is no way that any of us would have sailed in those light conditions. We would have done the same as the other boats we saw out on the water, used our engines, aka the “Iron Genny.”

Who won? Eclipse, due to a prior arrangement, had to bail on the race a bit early. The remaining three of us, at a moment when we were actually in a completely straight line, called the race early as a three way tie, which was funny because during the day’s event, each boat was in the lead for a portion of the time. Fun times with good friends! 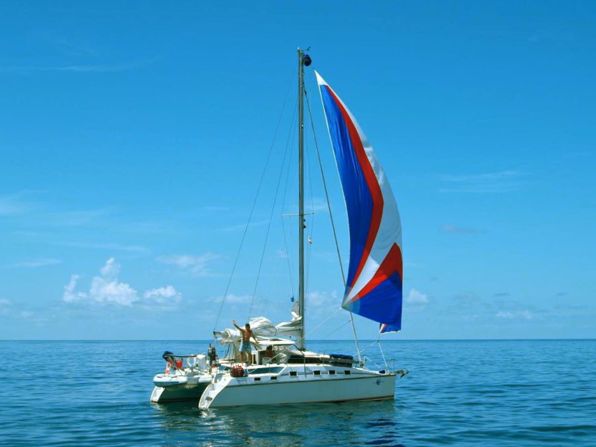 Alex, from Bluewater Sailing, just happened to be going by with some students on board as we were flying our spinnaker. He was nice enough to post this pic for us on Facebook!

PS: Free Wi-Fi at St. George’s sucks. We had to pay for internet to get this posted! 🙁