For the complete electrical novices reading this, appliances and electronics run on either AC (alternating current) or DC (direct current). When you plug a device into a wall socket in your house, you are supplying it with 110-120 volts AC (in North America at least — the voltage can vary in other parts of the world). If you plug something into your car’s cigarette-lighter plug, you are supplying it with DC, via the vehicle’s battery. Boats are like cars in that, unless we are on a dock and connected to shore power (AC), the power we use comes in the form of DC, from the batteries that we have on board.

So what if we have a real need for a frozen margarita (who doesn’t?) and thus have to fire up our Magic Bullet blender

, how do we do that given that it needs AC electricity and our batteries supply us with DC? Through a magic box known as an inverter. Even though I went to school for electronics (many moons ago), I can’t explain exactly what goes on to make that happen, nor do I care (so please don’t try to explain it to me). All I know is that if I want AC electricity to run things on our boat, I push a little button on our inverter/charger controller and Poof, AC comes out. At least, that’s what is supposed to happen. And it did, until recently.

Shortly before we left Grenada, the remote control panel for our magic box started acting up. Sometimes it would turn the inverter on and sometimes it wouldn’t. Because it’s simply a remote panel for the inverter, we could still turn the magic on by accessing the controls on the inverter itself, but given that it’s located under a salon seat (MY seat, meaning that I had to get up and move stuff to do it!), that wasn’t really very convenient.

I did a bit of research on this and talked to some friends and found that these controllers do happen to die from time to time. It’s also a sealed unit meaning that repairing it wouldn’t be all that easy either. After consulting the oracle (Google), I found several sources where we could purchase a new controller

and given that Rebecca was heading to the US, I ordered us a new one. Would you believe that since the day Rebecca left to head to California, the inverter’s controller hasn’t failed to operate properly even once? Not once! That is how intermittent issues tend to go though so I’m not stressing about it too much. If/when the original one does eventually crap out, at least we now have a spare that we can swap with it. For now, we’ll just keep it with the tons of other spare parts we keep on board. 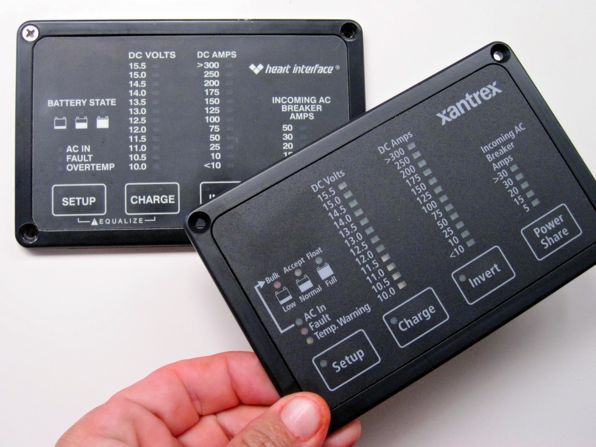 From tidy to… disaster?

We’re going to be rich!