The easiest repair ever?

For more than a year, and all the way from Florida, we have carried a bunch of spare parts for our Yamaha engines. One might even say a boat load of spares! Fortunately though, outside of spark plugs, filters and engine oil, we have not had to break into the stash. Until yesterday.

After making the decision to forego hiking to the volcano (we didn’t feel it would be prudent for the two of us to go alone, and we didn’t want to pay for a guide), we decided to make our way south to Kingstown, the capital city of St. Vincent, to re-provision. We found what was, at the time, a pleasant anchorage in Edinboro Bay and actually looked forward to spending the evening there before heading off to Bequia today. When we returned from our 2 hour shopping trip though, the conditions had changed drastically and we were having flashbacks to our rough night back in Cumberland! We didn’t even take the time to store the groceries before raising anchor, it was that bad.

Moving wasn’t the end of the world as we had a couple of backup anchorages planned that were only 30 minutes away. What we weren’t counting on was an engine problem manifesting itself just as we rounded the high rock walls on Duvernette Island. The port engine, which we had been running under for most of the day, suddenly started revving very high, a sound which even Rebecca, who was down below tucking away our groceries, could hear. Using the starboard engine I first got us safely away from the rocks and then raised the other outboard up to see if we had perhaps run over a piece of line or debris. Nothing was quite so obvious and after a bit more testing, it became obvious that we would have to rely on only the one engine. Redundancy is nice though, isn’t it? This entire situation is a bit of a coincidence because George on Earthling also experienced an engine problem after departing Cumberland. His engine overheated due to, what he later discovered was, a blockage in the cooling-water intake. Without the backup engine that a catamaran has, he was forced to make his way to Young Island and pick up mooring under sail. Good job, George! 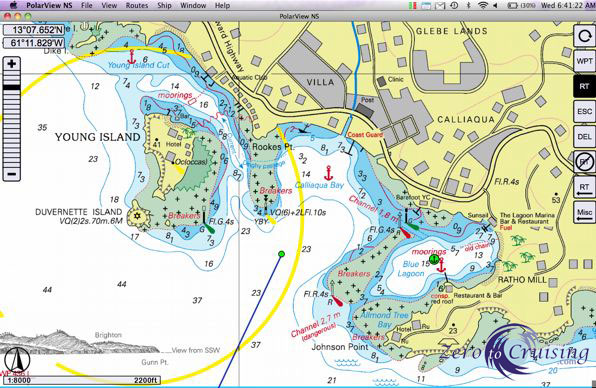 The blue line heading down towards the bottom of the graphic shows the beginning of the course we have plotted to Bequia. Image from our Polar View software.

Our plans had us stopping in a spot called the Blue Lagoon though, a charter-boat packed bay with a very narrow and shallow entrance channel, and only two lateral buoys to designate the safe passage through the reef. There is no way we would attempt sailing into a place like that. Fortunately, our starboard engine did us well and we navigated the 6′ deep channel and picked up a mooring with little issue. In fact, the only issue that we did have was caused by the “staff” who came over to assist us with picking up the mooring. Seeing a 50′ Catana try to pick up a mooring downwind later in the day, I can see why they feel the need to help. We are pretty good at dealing with our own lines though, when left alone to do our thing. When people we don’t trust try to help us with lines, etc. we usually just smile and tell them “It’s OK, we’re professionals. We do this for a living.” 🙂 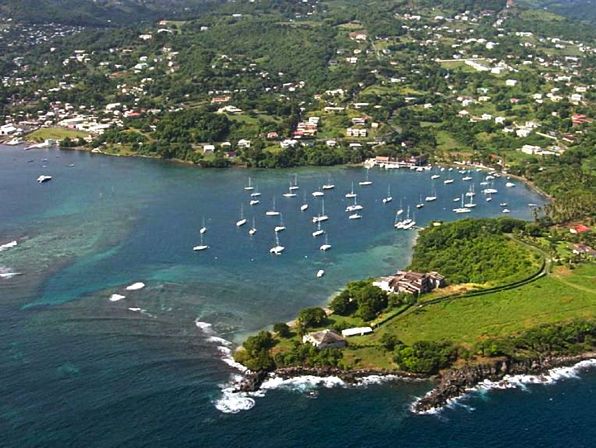 Yeah, there are one or two boats here.

With the boat safely secured but with daylight fading, we were eager to explore our engine woes. We again confirmed that there was nothing wrapped around the prop, both from inside the boat and by getting in the water. We also found that the engine revs sounded fine when at idle or with only a bit of throttle applied. With more juice though, the engine revs seemed to race. I had heard of people “spinning a prop” and guessed that might be the cause but, never having experienced it before, I was unsure. I consulted our service manual and found nothing. The Oracle seemed to confirm that the symptoms we were experiencing were indicative of a spun prop though. Given that we had a spare on board, I surmised that the easiest way to test and see if that truly was the issue would be to simply (I hoped it would be simple) swap them. 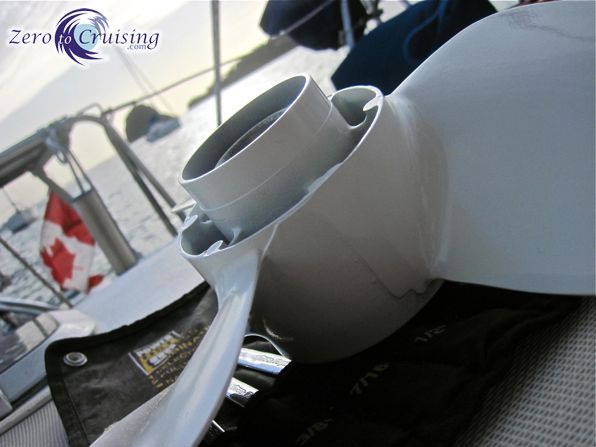 Isn’t the new prop shiny? Behind it, in the distance, you can see Duvernette Island. 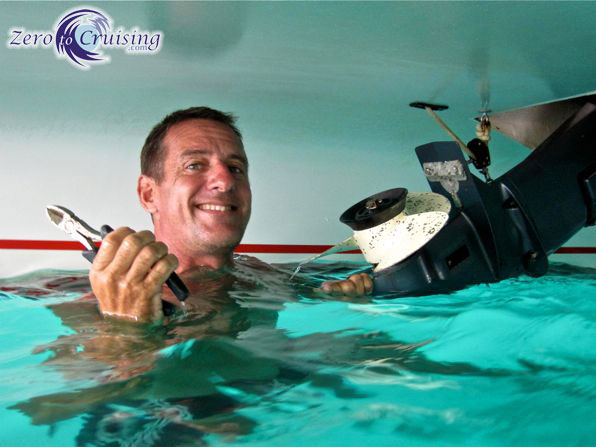 Don’t drop the side cutters!

As it turns out, with both Rebecca and I in the water, carefully handling the tools and the small parts, we were able to switch the old prop for the new one in record time. The water below us was 40′ deep so we really didn’t want to drop anything! Our subsequent tests seem to lead us to believe that the old prop had indeed spun as, with the new one installed, the racing engine revs is gone and we seem to have our normal thrust back. We’ll really only know for sure today though, after we cast off and begin making way out of the lagoon. Our fingers are crossed. If the issue truly is gone, this will go down in our record books as one of the easiest “serious*” repair jobs ever! 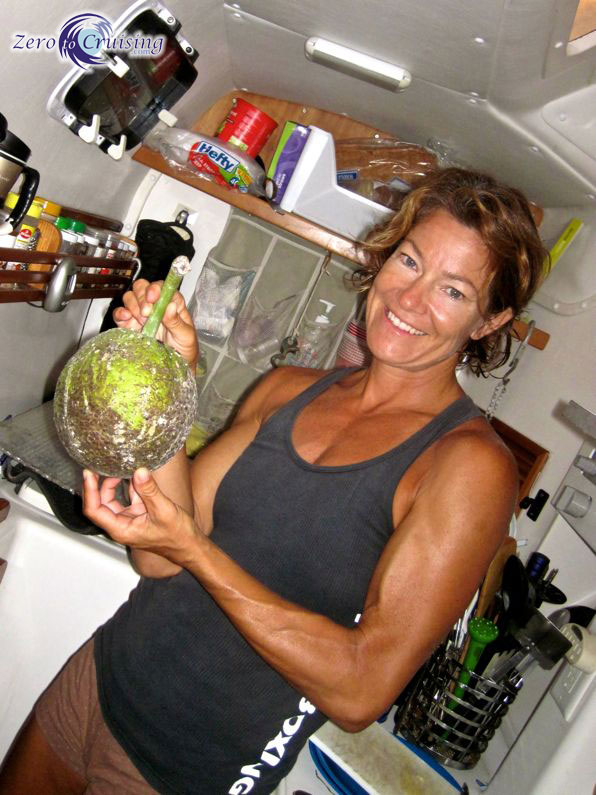 We celebrated our (hopefully) repair victory with a nice dinner. Do you know what this is?

*There are always things to fix on a boat. I consider propulsion, rigging and large-scale water intrusion to be among the serious ones though!

How much water does it take to go cruising