Only minutes after rising from bed this morning, I pulled a muscle in my back while reaching for the charging cord for my laptop computer. Was the cord that heavy? Was its position that awkward? While yes, it was stuck under a heavy item and I did have to twist a bit to get at it, I suspect the strain on my back was originally caused by the 1000 or so boxes that we lifted in and out of the dinghy over the past couple of days!

Our shopping fest has been progressing well and in fact, we have only one of two more details to tie up today. The guys at Budget Marine have been great to us and their store is a model for other Caribbean retailers to follow. Ace Hardware up the street… are you paying attention? No, I doubt you are.

The Leopard does look like a bomb went off in her though as we have just been removing everything from the cardboard packaging and depositing it in the first available spot. As such, the salon and the two berths not being used for sleeping are full of stuff! We’ll have plenty of time to deal with straightening it all up though, like during the 50+ hour passage to Grenada. 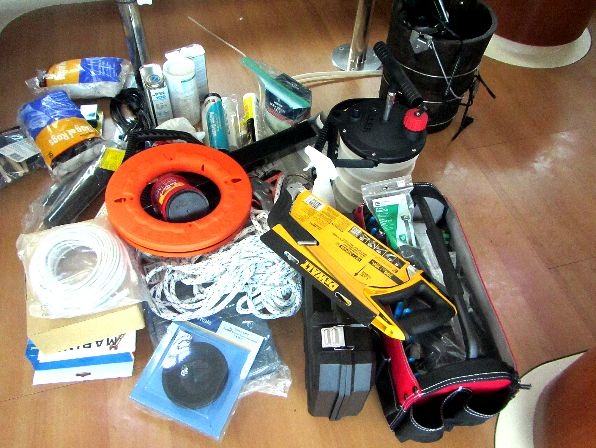 The boat looks like a bomb went off in it!

What do you prefer?

A cool solution to keep your phone safe