When it comes to boats it seems that there is no end to the “this is better than that” discussions. Cats are better than monohulls, Rocna anchors are better than CQRs, Yamahas are better than Tohatsus, those who hunger for a great debate will never starve around boats. One other source of controversy concerns the best way to make an electrical connection on a boat, specifically, should one solder wires together or crimp them?

In general, I am firmly entrenched in the crimping camp and until yesterday, have not had a reason to heat up a soldering iron. To ensure that all of the crimped connections that I make are secure, I splurged on a Ancor Double Crimp Tool

before we set sail, a purchase I remain very happy with.

Yesterday however, while troubleshooting our masthead windvane which has been acting up intermittently, I was forced to dust off my very-rusty soldering skills. The issue we were having was that, at times, the helm display would show the proper wind speed and direction while at others times, the device would seemingly just go on a holiday. Because the issue occurred only occasionally, I started my troubleshooting at the connector located at the base of the mast step, a place where we have had issues before. I decided to re-do all of the connections in the plug which required first, cutting off a section of the older wires and crimping new extensions onto them so that they would reach. Prior to attaching these new wires though I “tinned” the ends that would be screwed into the plug. It seems that even to do this is a matter of some debate but because the original wires appeared to have been treated as such, I decided to follow suit. 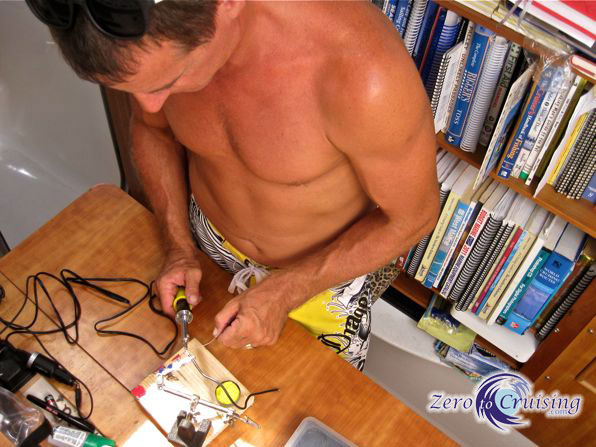 To tin the wires, I heated up the new-to-us DC-powered soldering iron down in our nav. station (the location of the most convenient DC plug on the boat). I am happy to report that it worked perfectly. Soldering is one of those jobs that seems to me requires three hands to accomplish. I was thus quite happy that I still had on hand the little vise shown in the photo below which, believe it or not, I have had in my possession since my high-school electrical classes! By the way, if you don’t know how to solder, download this free eBook: Soldering Is Easy. 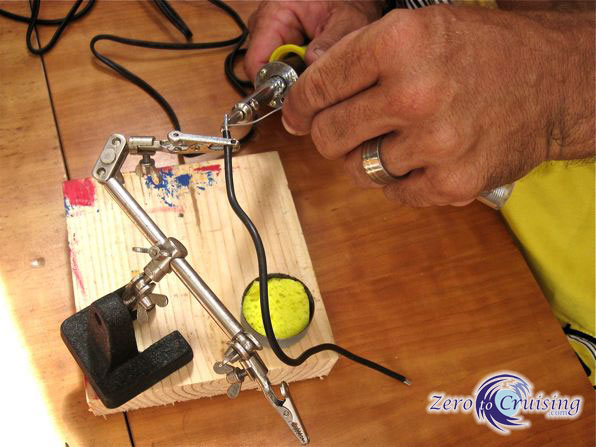 There is a funny side to this story but then again, isn’t there always? While I was messing around with the problematic connector, before I actually went to the trouble of replacing all the wires, I determined that the wire for the windvane doesn’t even go through that plug. Instead, it goes through an identical one on the opposite side of the mast! The plug I was working on contained only the wires for the anchor, steaming and deck lights. I continued on with the repair anyway though because it needed to be done. In my opinion, it’s now better than original. When I ultimately tested the lights at dusk I found that the anchor and steaming lights worked perfectly. The deck light on the other hand, did not. It appears a bit more troubleshooting is in order but I suspect that the bulb for the seldom-used deck light might be blown. Oh well.

What about the windvane? Well, I sprayed some contact cleaner in and around the connections on the other plug/receptacle and now all seems well. If only I had started there. 🙂

Sometimes the engine is needed, other times not.

More on stopping the flop

Going to the Dark Side, or leaving it?