We had read about this most difficult of boating maneuvers, and I think I may have even commented about it a time or two, but yesterday was the first time that we had actually applied it ourselves. I’m speaking of the 180 degree turn.

As I posted yesterday, our intention was to sail to Martinique, leaving Dominica behind us for good. We did all the necessary work to accomplish this objective: we paid for our stay on Sea Cat’s mooring, we visited the customs office and obtained our clearance from the country, we removed our dinghy engine, stowing it on the rail, and made everything in the boat secure for the passage.

With the high mountains around us, it was difficult to judge the wind. Even though the forecast had called for 15-20, it was much lighter when we started out. Shortly after getting underway though the wind built substantially, gusting above 25 knots, as did the waves. Within an hour or so it became apparent that, if we were to continue with our plan of sailing to Martinique, we were going to have a very long and very rough day!

So, we simply turned around. Well actually, it wasn’t really all that simple, coming about with the high wind and waves. I’m glad we had our sails reefed down by this point.

The key to safe sailing, as everyone will tell you, is to travel when the weather allows it and to not have a schedule which requires you to violate that rule. Fortunately for us, we have nowhere that we have to be. We do think that the wind is supposed to back a bit tomorrow, giving us a better angle, and that the waves are going to lessen a degree or two as well. Until then, we’ll just be hanging out here in Roseau, trying to stay out of mischief and taking advantage of the free Wi-Fi to upload a Bazillion photos to the Zero To Cruising Facebook Page.

For a certain power boater: In case I wasn’t clear, it is not the physical act of turning around that is difficult. Rather it is giving up on whatever distance you have travelled and returning to your starting point with your tail between your legs that makes it difficult. 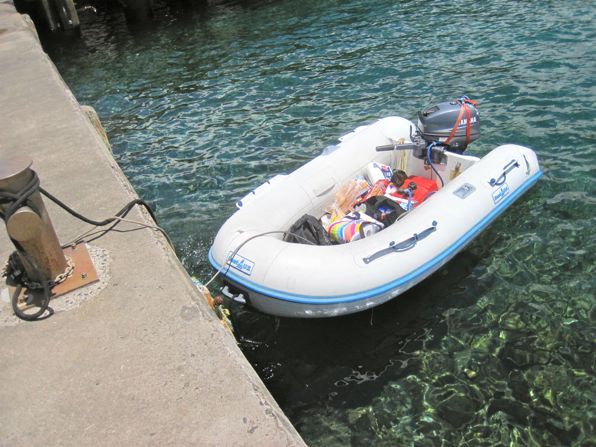 While in Roseau we have, on several occasions, left our dinghy at the fisherman’s dock. It is our standard practice to always lock our dinghy up as we simply can not afford to have it stolen (this just happened to our friends on m/v Finally Fun while they were in Vieques). The challenge in this case though was how to lock it to the large steel bollard with the cable that we have. 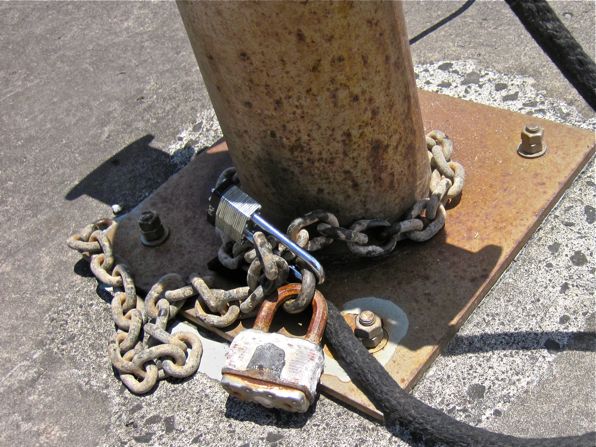 My solution was to cut a short length of chain to wrap around the bollard’s base (we already had the chain on board ZTC). With a long padlock, which we also already had, I could then secure the cable to the chain which was wrapped in such a way that it could not be lifted off the bollard. Ignore the rusty lock that you see in the photo. That is just an old lock which is stuck on the cable that I have not yet bothered to grind off. Now that this solution has proven itself viable I intend to purchase a short length of stainless steel chain the next time I’m in a big chandlery that sells it.

Making the most of the squally weather