We had high hopes for yesterday. Yes, we had several items on our to-do list that, when accomplished, would allow us to leave St. Martin on Friday, taking advantage of the forecasted settled weather. Someone, somewhere apparently had other ideas though.

We began the day with a mid-morning outing to stock up on gasoline. During that trip the outboard engine on our dinghy worked perfectly. Several squalls followed immediately after we returned to ZTC, delaying our next planned excursion to restock our pantry. When we finally did get around to trying to leave, the engine wouldn’t start. 🙁

I’m not going to write a long post about the steps we went through trying to troubleshoot this, at least not now because it’s not yet fixed, but I will say that it involved removing the carb, disassembling it, cleaning it and then putting it back in again. Several times!

I posted a request for info on Facebook and at the time of writing this blog entry there were no less than 100 comments on the two threads that I created on the subject! Pretty awesome, don’t you think?

Did I get it fixed? Sadly, no, the sunlight left us before I could get it working perfectly. As you might imagine, returning that engine to its fully functioning state has now jumped to the top of our to-do list. There will be no grocery shopping, nor leaving the island, until it is back working 100%. 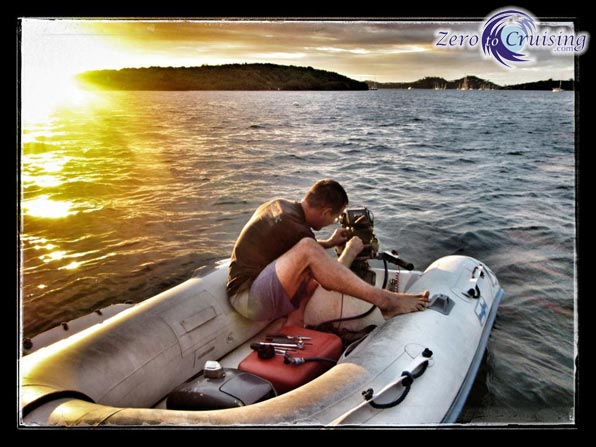 This is no way to enjoy the sunset.

By the way, we aren’t the only ones who have had some unplanned pre-passage engine issues. Our friends Brittany and Scott have had a few challenges of their own. Hopefully they get it all sorted so they can hurry back south to join us.