Unlike the rest of the blog entries this week, this one is being posted from Grenada instead of Trinidad. Scott and I caught the 6:00 AM flight out of Port of Spain this morning and arrived back home before 7:00 AM. It’s funny that I can consider a boat, in a foreign country, to be home. Perhaps the expression “home is where the heart is” applies in this situation because it sure was nice to be back with Rebecca, and of course ZTC.

The final session of the STCW course dealt with sea survival and we spent the morning in the pool working with an inflatable life raft. We practiced deploying, boarding and then moving it. We also worked on how to right an inverted raft should it fail to inflate in the proper orientation, or should it flip over in unsettled weather. After the initial deployment of the raft, each of us had to jump off the platform into the pool, simulating jumping off a ship. For those who had issues with high places, this alone was a significant barrier to overcome. Overall this was a pleasant session and I now know first hand that spending a long period of time in one of those rafts waiting to be rescued would not be a lot of fun!

In addition to the practical exercises that we did in the morning yesterday, we wrapped up the theory sessions in the afternoon, which of course had to include a written exam. Both Scott and I put some time into studying and thus were pretty sure that we’d pass. There were a couple of tricky questions though which really made us think.

What about my experience with Trinidad in general? To begin, I was very fortunate to be invited to stay with Scott’s friends Jason and Karly at their beautiful home. It is located in a nice neighborhood in the Diego Martin area. The downside to staying there was that we had about an hour (or more depending on traffic) commute to get to the school in Chaguaramas. This was a small price to pay considering how nice it was to be treated like an old friend by this cool couple. The university is located very near the area that most cruisers would stay and I saw several boatyards there filled with vessels being worked on (including Coral). With that said, it isn’t a very touristy area. Jason, our host, wanted to make sure that we saw more of Trinidad than just the industrial/commercial section so he and his wife took us out one evening for some local food and drink. Fun times! Hopefully in the not-too-distant future Rebecca and I will have an opportunity to really explore the island together.

I mentioned in the first post about this course how we were stopped after curfew hours on our way home from the airport. I have heard multiple times that the curfew does not affect cruisers at all. Well, perhaps for the typical cruiser who is in bed by 8:00 PM this is true. It was not the case for us though, or the other locals. Because you can not be on the streets after 11:00 PM, bars and restaurants have to close early which puts an end to any late-night liming. Even getting a ride to the airport this morning was affected by the curfew. Our flight was scheduled to depart at 6:00 AM. With the curfew ending at 4:00 AM, that pretty much made it impossible to be at the airport the recommended two hours early (perhaps there was a way around this but we didn’t research it further). Fortunately our new friend Justin, a classmate in the STCW course, volunteered to get up super early to leave his house at 4:00 AM so that he could get us to the airport on time. That was hugely appreciated but in spite of him being very prompt, and driving fast, we still arrived at the gate with our flight already filled with passengers. Close!

All in all our experience at the University of Trinidad and Tobago was very positive. The course material, facilities and instructors were excellent and we ended up which a fun group of guys to share the class with. For anyone looking to complete the STCW course, I would highly recommend doing it at UTT in Trinidad. It was a great experience. 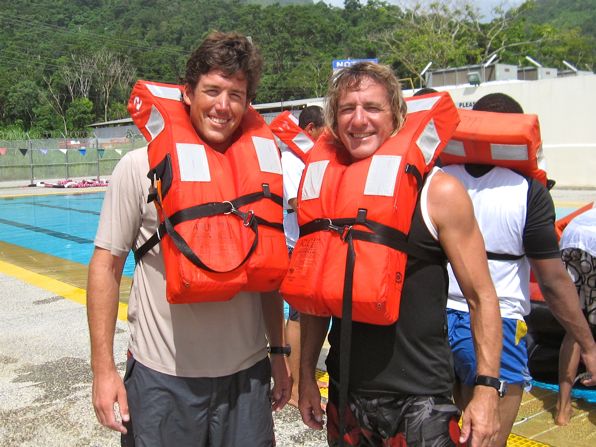 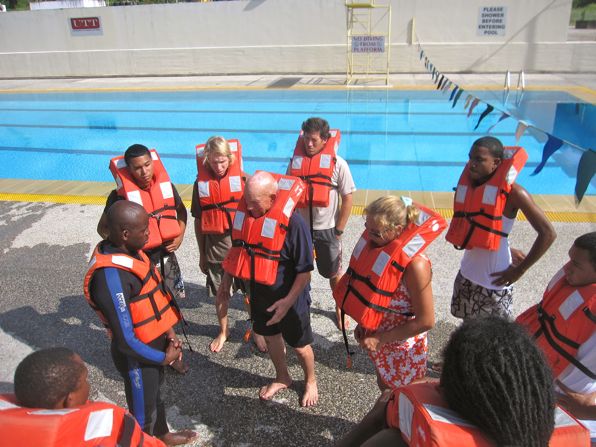 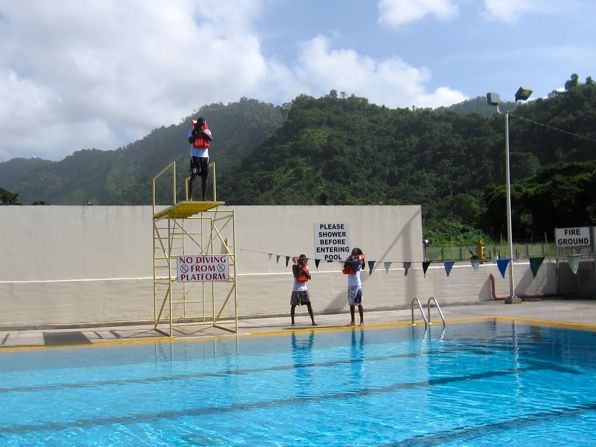 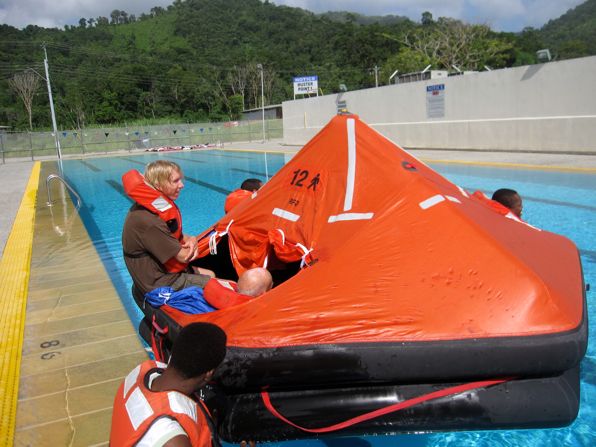 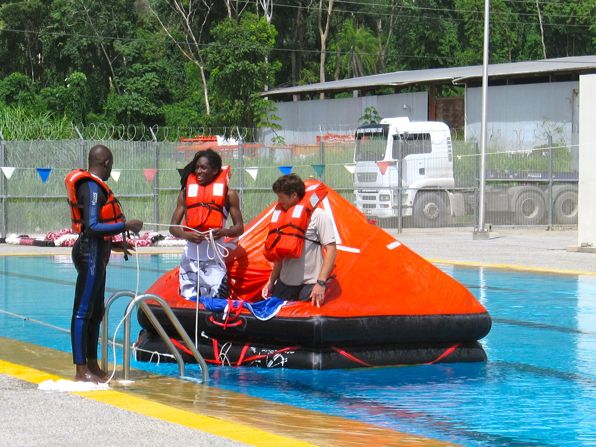 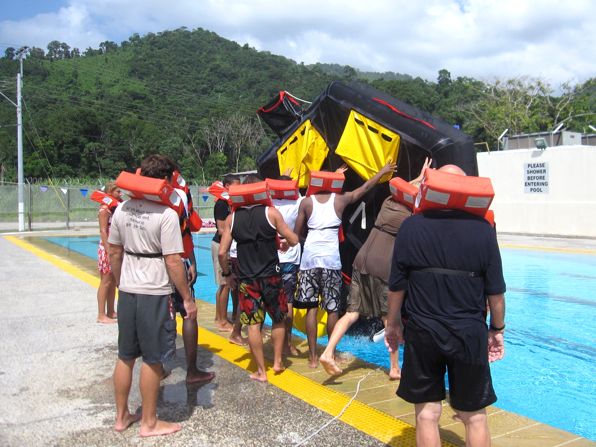 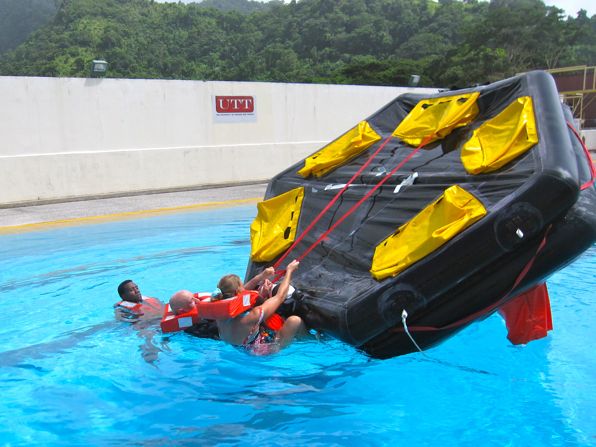 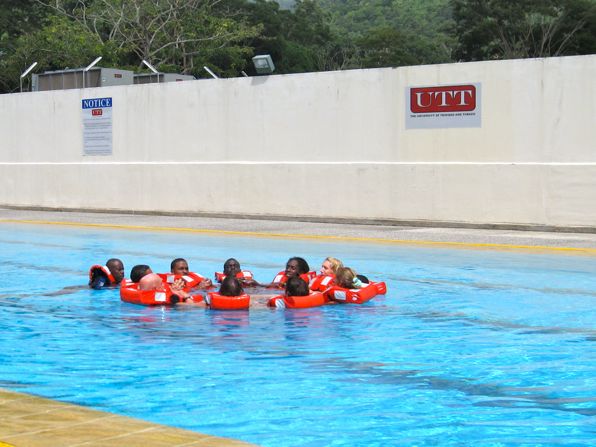 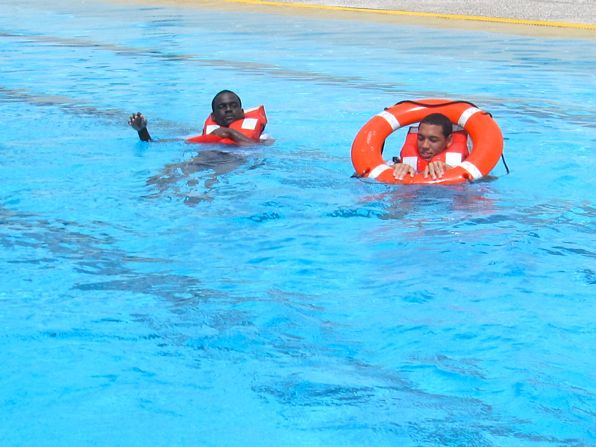 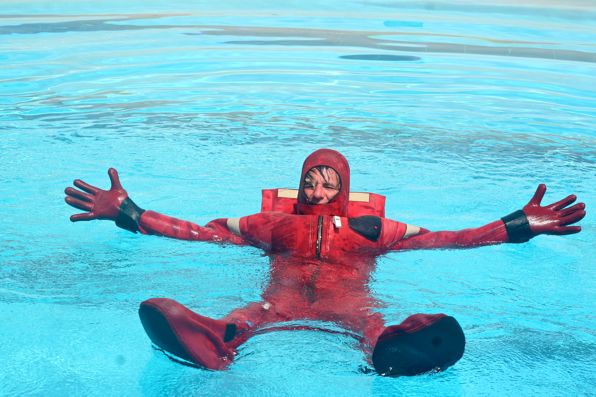 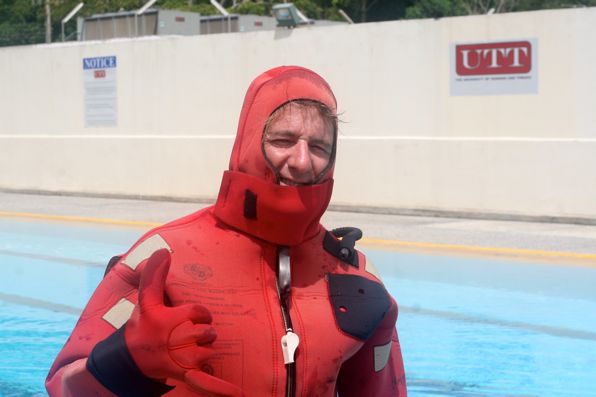 The video below shows Scott and I working to right an inverted life raft.

In case you thought that it was only me having fun, Rebecca and some friends took a tour to the Seven Sisters waterfalls while I was gone. Here she is jumping off the final 30′ (?) cliff. She was the first in the group to make the jump, which doesn’t surprise me at all. 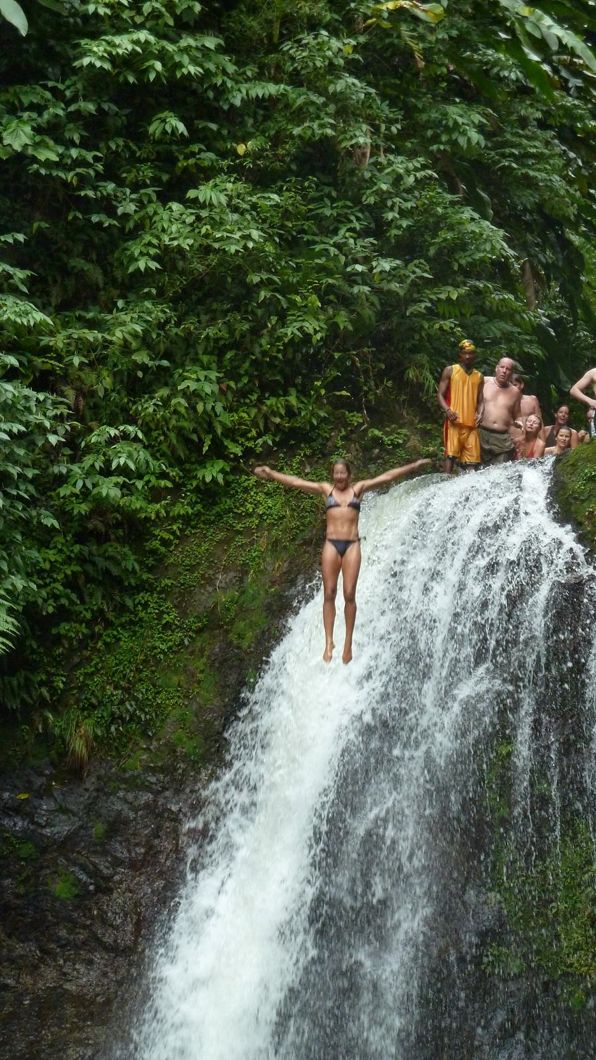 PS: Big thanks to Scott from s/v Rasmus for being such a great partner in this course.

Clothing: one thing that is cheaper for cruisers!